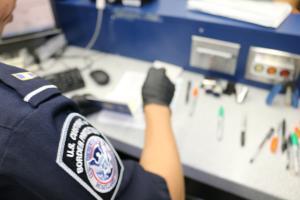 In March, we reported on CBP’s focus on next-generation processing for Global Entry, with innovations streamlining and expediting the arrival experience and offering touch-free travel.

At the time, Trusted Traveler Programs Director Mike Millich said CBP had updated approximately 80 percent of its airport kiosks across the country and that he expected 100 percent of those kiosks would be updated by the end of the year.

Travelers will see receiptless processing even at older kiosks updated with facial comparison technology. A touchless portal pilot was conducted at Los Angeles International Airport from September through January and CBP plans to expand the initiative. It was very successful and led to 94 percent faster processing than legacy kiosks: From 45 to 60 seconds with the older machines, to about 3.5 seconds with Global Entry touchless technology.