COLUMN: How Active Is the Insurrectionist Movement in the United States?

Scoping the size, motivations, and intentions of this movement is a critical challenge that merits further investigation by law enforcement.

For decades, I have tracked political instability and insurgencies around the globe, assuming that the indicators I developed would never have relevance for the United States. The events of January 6, 2021, led me to challenge that assumption, speculating that the same dynamic might now be occurring within our borders. I decided to apply the indicators developed for foreign countries in the past to our present circumstances in the United States.

Following the January 2021 attack on the Capitol, I surveyed a dozen colleagues, asking them to rate 19 indicators of incipient insurgency or insurrection (based on the definitions provided below) during the time period subsequent to the November 2020 presidential election. The matrix below organizes the indicators into five categories, and displays my colleagues’ responses over time. In January 2021, their informal, consensus view generated an overall rating of Medium as shown by the M in the chart.

Three months later, we reevaluated the indicators to consider what new information had been revealed by Congress and the press relating to the activities surrounding insurrection. The overall rating moved from Medium to High because four indicators’ ratings changed (as shown in red), resulting in 10 of 19 indicators now rated as High:

Another indicator was raised from low to medium to reflect subsequent reports of five deaths and more than 140 injuries to police officers. We encourage you to review all the indicators and generate your own set of ratings.

Applying this time-proven “indicators yardstick” to current political dynamics in this country strongly suggests that an incipient insurgency—or in today’s parlance, an insurrectionist movement—has emerged in the United States. The number of active proponents of insurrection may be limited to only hundreds or thousands of citizens, but scoping the size, motivations, and intentions of this movement is a critical challenge that merits further investigation by law enforcement and homeland security analysts.

Insight into how to use Indicators to track future insurrectionist behavior can be found in the Analyst’s Guide to Indicators. 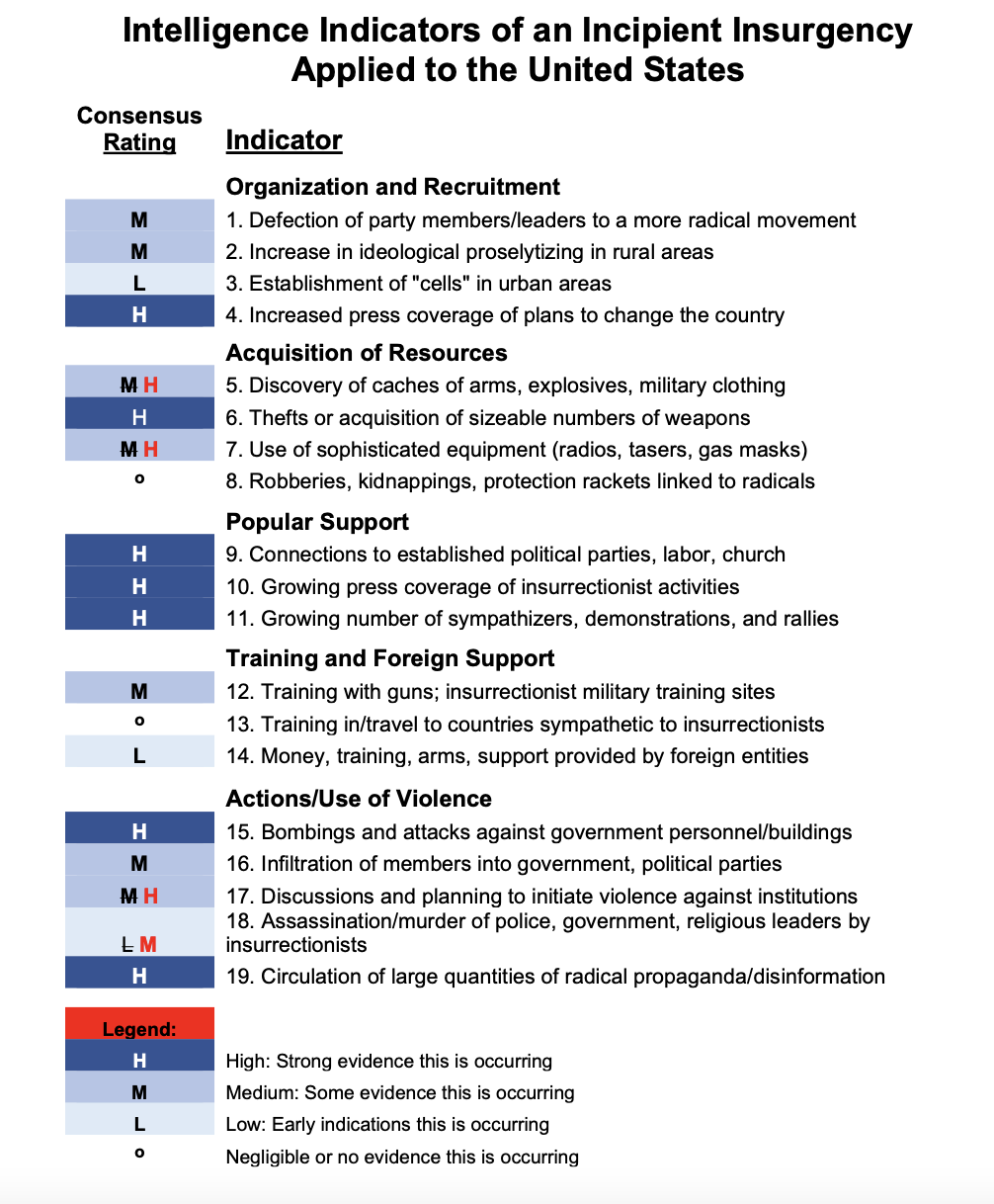 Share
Facebook
Twitter
Linkedin
Email
Previous articlePERSPECTIVE: India Can Stand Against Russia’s Crimes and with the Rules-Based International Order
Next articleJury Convicts ISIS ‘Beatle’ for Role in Hostage-Taking Scheme that Resulted in the Deaths of American, British and Japanese Citizens