Leading with Character: A Powerful Force

Perhaps the reason I revered Sidney Poitier was that he displayed virtues I admired, but couldn’t quite achieve.

Last week we lost a great human being, an American icon (by way of the Bahamas), and a leader of character. To me, the inimitable actor and humanitarian Sidney Poitier was all that and more. He was a powerful force in our society. He became the first black actor to win an Academy Award (Best Actor for Lilies of the Field in 1963). Several decades later, President Obama awarded him the Presidential Medal of Freedom.

The Power of Self Control

I was a child of the 1960s, when Sidney Poitier was at the peak of his acting career. Although I was too young to appreciate him at the time, as an adult I treasured his movies. He was my favorite actor.

When I watched Sidney Poitier on screen, I saw a decent man who personified grace, dignity, respect and, most of all, self-control in the face of adversity. Perhaps the reason I revered Sidney Poitier was that he displayed virtues I admired, but couldn’t quite achieve. I was impatient, and impatience leads to a lack of self-control. When a person can’t maintain self-control, they lose any semblance of grace, dignity, and respect for others. Over the years, I’ve worked on improving those virtues in my effort to be a better leader. But I can’t say I ever lived up to the example Sidney Poitier set. 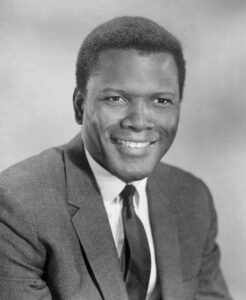 The Power of Setting a Good Example

My favorite Sidney Poitier movie is the classic To Sir, with Love. No, it’s not a perfect movie; in fact, it’s kind of idealistic. But you’ve got to love the wistful theme song, by Lulu, and the feel-good ending. In the movie, Sidney Poitier finds himself in a classroom in a tough neighborhood of London, teaching a bunch of unruly, disrespectful children. He slowly wins them over by setting a positive example, enforcing high standards, and treating them as adults.

The Power of Redemption

There’s power in the theme of redemption, in the belief that with character-centered leadership people can turn their lives around. We could all be better people, and more effective leaders, by following Sidney Poitier’s lead.

Look in the mirror. Do you model the virtue of self-control?