Martin Luther King, Jr. modeled the way for us all by choosing to strengthen his character at every turn.

On Monday, January 17, our nation honored the life and legacy of Martin Luther King, Jr. Wow. The man had a way with words. His influence lives on because he left us a treasure trove of memorable quotes to live by. What’s your favorite MLK, Jr. quote? I wouldn’t want to choose between my favorites, but this one moves me, and I’m excited to feature it in my blog this week:

“The time is always right to do what is right.” – Martin Luther King, Jr.

Uniting People in Support of a Shared Purpose
What wise words to guide us through these challenging times! Today, our nation is like a ship being tossed in tumultuous seas. The winds and waves of change have divided and distanced our society, threatening to wash away the very principles our nation was founded upon. Now more than ever, our nation needs leadership with the moral courage to stand strong and steady – leaders capable of uniting people in support of a shared purpose by building the trust and respect necessary for organizations and their people to thrive. 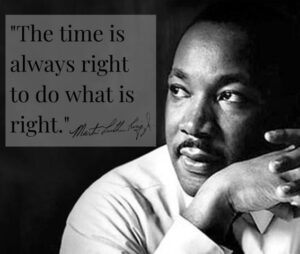 Martin Luther King, Jr. was that leader of character who united our nation around the shared purpose of advancing civil rights. The momentum he created eventually led to the women’s rights movement that gave us Title IX, the Equal Rights Amendment, and opened the doors of the U.S. federal service academies to young women like me. Looking at it that way, Martin Luther King, Jr. paved the way for me to attend the U.S. Coast Guard Academy.

“A leader of character is one who embodies the Coast Guard Core Values and influences and inspires others to achieve a goal by seeking to discover the truth, deciding what is right, and demonstrating the courage to act accordingly, always.”

Every aspiring leader needs inspiration from leaders who model the way for others to follow. Martin Luther King, Jr. was one of the most powerful inspirational leaders ever. He stood up for what was right in the face of great adversity during a time when our nation most needed a leader of character to model the way to a more just society.

Those who lead with character are virtue-driven. When their actions and behaviors are in alignment with their values, they succeed, regardless of the possible adverse consequences of making difficult, value-based decisions. They are humble when on top and maintain their professional demeanor and dignity when knocked down. They work hard and persevere, never giving up on themselves or others. Leaders of character do not make excuses; they take responsibility for their actions and the actions of their subordinates.

Duty-bound by far more than achieving results and meeting organizational objectives, leaders of character are servants. They recognize their moral obligations to demonstrate ethical integrity and deliver selfless service to the people and organizations they lead. Those who lead with character inspire others to achieve their personal and professional goals, to seek the truth and to always do what is right – that is, what fidelity to their core values demands – regardless of the consequences.

Every time leaders face a situation involving difficult moral considerations, they can choose to either strengthen their character or erode it. Martin Luther King, Jr. modeled the way for us all by choosing to strengthen his character at every turn. He’s a leader I would gladly follow.

Look in the mirror. Do you model the way by doing what’s right – always?