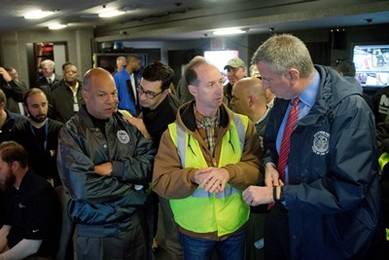 An active shooter training exercise on November 22 between the Department of Homeland Security (DHS) Science and Technology Directorate (S&T) and the New York Police Department (NYPD) Counter Terrorism Division not only tested training and proficiency, but also allowed the incorporation of several commercial technologies that could benefit future emergency situations.

“Not only was I impressed with the quality of the trainingand the level of proficiency displayed, but also with the coordination and unity of effort of the event,” said S&T’s Deputy Under Secretary for Science and Technology Dr. Robert Griffin. “I am really pleased that DHS S&T had the opportunity to help support this important mission, playing a critical role in working with our partners in NYC.”

“This an extraordinary event, one that is very important to recognize because exercises and training like this improves coordination between agencies, awareness of training, and further unifies our efforts to secure our nation,” said Griffin, a former firefighter.

The NYPD initially approached DHS’s S&T component “more than 11 months ago and asked for support specifying the exercise should be held in a subway station,” DHS said, adding that, “With a broad mission to deliver effective and innovative insight, methods and solutions for the critical needs of the Homeland Security Enterprise (HSE), sometimes S&T doesn’t need to create new technologies or training; they can leverage resources from other federal departments.”

DHS explained that, “S&T’s HSARPA team, which focuses on cutting-edge research to produce revolutionary changes in technologies, new capabilities and threat and risk assessments for the HSE, S&T used its liaisons in the Counter Terrorism Technology Evaluation Center to spearhead this particular effort. The CTTEC was developed via an Interagency Agreement with ARDEC to assist in evaluating tactics, technologies, and procedures responders use when responding to an active shooter incident. S&T’s CTTEC and ARDEC normally support at least two of these active shooter types of exercises annually. In August 2015, they completed an active shooter/IED exercise with West Orange New Jersey.”

DHS said this was the fifth exercise DHS has planned and coordinated to support technologies demonstrations and evaluations.

“This active shooter exercise afforded DHS and S&T the opportunity to observe police officers using several tools of potential value to DHS and other HSE components including an indoor shot detection capability, a geo-referenced graph for better situational awareness, and an interoperable communications capability currently used by the US Army,” DHS stated.

The NYPD Active Shooter Exercise was specifically designed to test the coordination between multiple NYPD responder resources, Bratton explained. He was very clear in telling citizens of New York City, that they are very well prepared and continually improving that preparedness.

While this exercise wasn’t in response to the attacks in Paris, Griffin echoed Johnson when he said it should give the citizens of NYC, and the rest of the nation, confidence that all levels of the government are working together to be prepared for whatever the future may bring.

“We will continue to be vigilant and use training and preparedness events like this to improve our community’s ability to respond to disasters,” Griffin concluded.