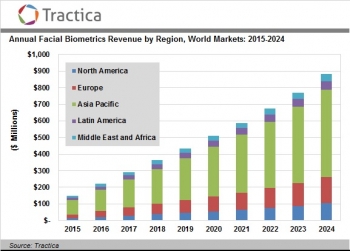 Use of facial recognition devices and licenses is predicted to increase from 28.5 million in 2015 to 122 million by 2024, which will likely lead to increased use by government and lawenforcement, according to market research firm Tractica.

This trend could come to represent a revolution in security methods and lend a critical new tool to those responsible for the security of everything from borders to consumers’ wallets.

Similar to human recognition, facial biometrics technology recognizes people by their faces. The technology is passive, often requiring no action by the person being recognized, as well as stealthy, helping to identify persons of interest.

According to the report, after a number of breakthroughs during the 1980’s and 1990’s, the technology is now experiencing a period of rapid growth. The FBInoted that, “Early facial recognition algorithms used simple geometric models, but the recognition process has now matured into a science of sophisticated mathematical representations and matching processes.”

Tractica assessed that as costs continue to steadily decrease, continued increase in usage is likely. Currently the most common use for facial recognition technology is mobile device authentication—a trend likely to remain strong over the next several years. Tractica expects the technology to gain traction in a number of industries, including banking, law enforcement, and government applications, such as national ID cards and biometrics passports.

“The largest use case for facial recognition is mobile device authentication,” said principal analyst Bob Lockhart in a statement. “This use case is defined in massive volumes, but at a small unit price. The next substantial use case for facial recognition is to identify persons of interest. This use case exists in government, defense, law enforcement, and enterprise markets. Future applications include anonymously profiling people for uses like customized digital signage.”

However, not all individuals and organizations are supportive of the growth of facial recognition technology. Privacy groups recently walked out of talks with US officials that was intended to establish a code of conduct for the technology. Moreover, Alessandro Acquisti, professor of information technology and public policy at Carnegie Mellon University, noted, “Facial recognition makes it possible for third parties to identify people in the ‘offline’ world without their awareness, knowledge, and consent.”

The technology has also come under scrutiny in the UK where use of facial recognition systems by law enforcement have become hotly debated over privacy concerns.

Despite these concerns, all signs point to continued growth of this moderately sized industry at a rapid rate. Starting from a base of $150 million in 2015, Tractica forecasts that global facial recognition revenue will reach $882 million by 2024, with cumulative revenue for the 10-year period totaling $4.9 billion at a compound annual growth rate of 22 percent.