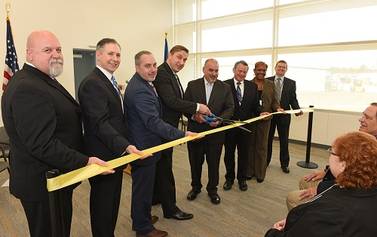 “At TSL, their call to action is to address the ‘what could happen.’” And to answer this call, they conduct special studies to ensure we identify and correct vulnerabilities before they play out in a real-world event” said Acting S&T Under Secretary Dr. Robert Griffin at the ribbon-cutting ceremony. “While you may not hear it on the news, the work on this 12-acre secure campus is helping us thwart the terror threats that crop up around the world.”

DHS said, “One of TSL’s primary responsibilities is to provide independent test and evaluation of commercial explosives detection equipment and certify them for use in checked luggage and checkpoint environments. The facility consists of specialized explosive storage and handling areas and a multi-laboratory infrastructure designed to test and evaluate technology for explosives and contraband detection and blast mitigation.”

“Today we renew with vigor a lasting commitment to aviation security that we made 25 years ago to make the skies safer and the world more secure,” said TSL Director Christopher Smith.

Established in 1992 as part of the federal response to the Pan Am 103 Lockerbie bombing of 1988, TSL is internationally recognized for its unique ability to advance detection technology from conception to deployment, through applied research, test and evaluation, assessment, certification and qualification testing.

“Back then we constructed a laboratory to develop and test equipment to detect bombs hidden in checked luggage,” but, “Today we are expanding those capabilities to address threats that are constantly increasing in complexity and variety,” Smith said.

With the new building, DHS said “the staff of scientists and engineers at TSL are able to conduct more performance tests with its unique variety of commercial, military and non-traditional explosives. The results of these tests provide critical information to the Transportation Security Administration (TSA), other DHS components, various government agencies and many international government partner agencies.

TSL is the only laboratory authorized to provide certification and qualification testing of explosives detection systems for the TSA.

Every traveler boarding a plane from any airport in the United States, including his or her carry-on and checked baggage, is screened by explosive detection systems that were tested and certified at this facility.

Share
Facebook
Twitter
Linkedin
Email
Previous articlePortrait of a Hybrid IT Organization
Next articleHizbullah Leader Said There Will Be ‘Decisive’ Retaliation Against US, Bases In Region