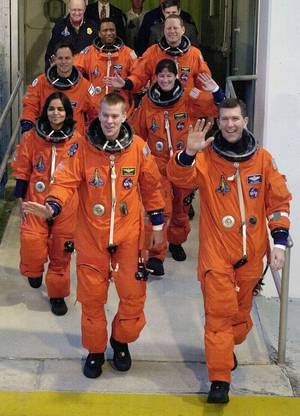 The Columbia Space Shuttle recovery response operation was “the first response operation under the Department of Homeland Security [DHS],” according to the Federal Emergency Management Agency’s (FEMA) 53-page Informal After Action Report (AAR) released this week after a protracted two year struggle under the Freedom of Information Act.

Prepared by FEMA’s Office of Response and Recovery, the after action report stated that, “Since this was both a long and large ‘no-notice’ response operation and occurred in a resource-constrained environment, this may serve as a good case study for the development of the National Response Plan and the organizational structures associated with it.”

The Space Shuttle Columbia disaster occurred on February 1, 2003, when the shuttle disintegrated over Texas and Louisiana as it reentered Earth’s atmosphere, killing all seven crew members.

The FOIA request for the AAR was made with FEMA on April 17, 2013, by John Greenewald, who runs the “Black Vault” website.

It “was a mission no one had expected or prepared for, so the response team literally had to ‘make it up as we went,’” the AAR stated. “It also brought together hundreds of agencies, including thousands of volunteers, most of whom bad never worked together.”

“Finally,” the AAR stated, “it was also very large in scope from at least three perspectives:

Additionally, this operation took place as our nation was ramping up for war with Iraq and continued through the end of the war. This posed many challenges with regards to resources being diverted to support the war effort.”

FEMA’s AAR stated that, “The response at the local level in the immediate aftermath of the Columbia tragedy set the foundation for a successful operation. There were dozens of communities affected and the local law enforcement and emergency managers were well organized and able to effectively use the thousands of volunteers that showed up to help. State emergency management personnel from both Texas and Louisiana came on the scene and quickly integrated state assets into integrated state response structures.”

“Less obvious, but just as important,” FEMA said, “are all the state and federal agencies that were imbedded in the communities in the affected area. For, example, the US Forestry Service (USFS) provided the first helicopters in the area. The Texas Forest Service USFS and the FBl had local offices and were on the scene immediately.”

“Integration of state/local response organizations with their federal counterparts was greatly facilitated by having already established professional relationships as a consequence of being geographically collocated. The USFS, FBI, along with FEMA and Environmental Protection Agency [EPA] regional offices in the area had developed habitual relations with state and local officials which went a long way toward a smooth transition from state/local response to federal response operations,” the AAR said.

Immediate problems revealed themselves early on, however.

For instance, “More than one GPS standard was used for this incident, resulting in a significant amount of confusion on the specific locations of debris.”

FEMA said it also “did not have a good system to manage the thousands of volunteers that came to assist. State and local entities assumed management for most of the volunteers.”

“We need a system that can quickly evaluate and screen those volunteers that can be of assistance,” FEMA reported, adding, “We also need to have the capability to provide food and incidentals to volunteers. And, we need to have contracts that convey the government’s responsibilities and the volunteers’ authority to act on behalf of the government.”

It also was quickly realized that a viable database must be readily available for a response operation.

“We tried to build a new database for this operation and while it eventually worked out, it created many problems and unnecessary duplication of work throughout the entire operation,” FEMA reported. “At the onset of the incident, several agencies logged (county judges, sheriffs, EPA, Texas Forest Service, NASA, etc.) in calls and set up databases on shuttle debris. Within the first few days we tried to merge the various databases into a single, unified database that would support all the state and federal agencies in the Disaster Field Office,” but “learned that you can’ t develop a database while concurrently operating it.”

FEMA therefore recommended “a national database and 800 phone number be established and ‘on the shelf’ to be immediately available at the onset of an incident. It should be sufficiently generic in nature to collect data that would apply to any situation. It would, in effect, be a dirty database that collects the initial input from the field at the onset,” thereby allowing “time to establish a specific database for the incident while concurrently capturing information from the field.”

Other problems noted in the AAR was the fact that, "Full-time employees of FEMA’s federal partner agencies were not reimbursed for their straight time when deployed to this incident. This is problematic in two ways. First, their home organizations are more than reluctant to release their employees as they have to continue to pay them out of their budgets, while at the same time, have someone else do their work back at home station. Clearly, it would have been easier to get full-time personnel if straight time pay was provided.”

“A second issue of concern is a perceived inequity among agencies,” the FEMA AAR stated. “Specifically, the Urban Search and Rescue personnel deployed to this incident had their straight pay reimbursed as well as payment for their replacement back at home stations. Additionally, some of the Urban Search and Rescue teams get portal to portal pay. These folks were working side by side with the Forest Service community under different pay rules, resulting in more than a little resentment.”

Continuing, the AAR noted that, “A common refrain — from the people that worked in the Disaster Field Office as well as the many visitors — was that this was an excellent example of interagency cooperation. Local, state and federal agencies worked as a very tight-knit team and this environment made up for the shortcomings resulting from an organizational structure that was put together ‘on the fly’ and resulted in a hybrid of the Federal Response Plan and the Forest Service ICS architectures.”

FEMA said, “We recognize a better organizational structure is needed for future response operations where there is a large interagency effort and organizations are working together for the first time. For example, our logistics and administration functions were not interagency-staffed and should have been. The information/planning function was partially integrated but needed more interagency participation. We did have a fully integrated multi-agency operations function that worked extremely well — particularly considering that these agencies never worked together before and were literally ‘making it up as they went’ since this was an unprecedented and unprepared-for incident.”

Additionally, “The organizational structure we had worked well, but it was more because of personalities involved than anything else,” the AAR said. “We basically used a unified command structure but had more than a few holes in it. That being said, the structure used for this operation would be a decent starting point for developing an architecture that could be used for all-hazards incidents.”

While there were numerous noteworthy issues that came out of the AAR review that presented issues “that need some type of corrective action” with regard to best practices, the one that had the most negative impact was the “inability of all responding agencies to communicate with each other via data networks.”

FEMA said, “Each agency operated within its own network. Some without the ability to get on the Internet unless going through a cable company. This necessitated ordering additional service to provide either DSL lines or cable company lines for Internet service. Every agency that responded to this event had a requirement to communicate with all components of the operation via a data circuit. This requirement existedfor several reasons:”

What was recommended is that, “The outer firewall on the FEMA network needs to be opened up to all responding agencies so they can obtain access to the Internet to send/receive email and communicate with other agencies. This is necessary in order to reach regional offices for file transfer, to conduct research on the Internet for contracting offices of other agencies, or just conduct general business from their regional offices. This would increase productive communication and reduce the need for additional services (and expenses) to conduct business with regional offices, field locations, headquarters, and other agencies.”