NCSC Reveals the Newest Exhibit in its Digital Wall of Spies

The WWI exhibit tells the stories of 17 German and German-American spies and saboteurs, as well as the efforts to counter the sabotage. 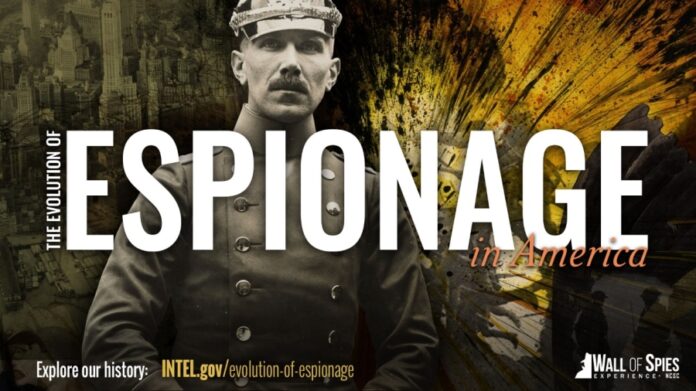 A new digital exhibit unveiled today by the National Counterintelligence and Security Center (NCSC) highlights a lesser-known aspect of World War I (WWI) – the sabotage and espionage campaign carried out in the United States by Imperial Germany. The “Evolution of Espionage in America” exhibit spotlights this secret war on the American home front, which began long before the United States entered WWI.

The exhibit features some of the more audacious attacks in the United States by German and German-American saboteurs during WWI. The sabotage campaign, often directed from the German Embassy in Washington, D.C., targeted hundreds of munitions factories and depots in America, as well as munitions-carrying ships that provided arms to the Allied Powers, with much of the activity occurring in the New York City area.

“A little over a century ago, America’s relative peace and tranquility was shattered by a foreign sabotage campaign that unleashed destruction across the country. German intelligence operatives targeted a thriving but vulnerable U.S. manufacturing sector, determined to stem the flow of U.S. munitions to German adversaries in WWI while working to conceal their role in the U.S. sabotage campaign,” said Michael J. Orlando, the Senior Official Performing the Duties of the Director of NCSC. “While many of these stories have long been forgotten, they hold valuable lessons as we confront today’s challenges.”

NCSC’s digital exhibit provides details on these and other WWI plots as part of NCSC’s ongoing “Evolution of Espionage in America” project, which is designed to inform the broader public about the critical role of espionage throughout our nation’s history.

The research, design, and development of the exhibit was a joint effort by NCSC and the Office of Civil Liberties, Privacy, and Transparency (CLPT), which are both components of the Office of the Director of National Intelligence (ODNI). The new exhibit can be found at INTEL – WWI.

The WWI exhibit tells the stories of 17 German and German-American spies and saboteurs, as well as the efforts of American federal law enforcement and New York Police Department bomb squads to counter the sabotage. More than 170 images accompany the narrative and help bring it to life. Below are a couple of examples of what visitors will learn about at the new digital exhibit:

The new digital exhibit is the third “Evolution of Espionage in America” exhibit designed to expand and complement NCSC’s physical “Wall of Spies” museum at NCSC’s facility at the Intelligence Community Campus-Bethesda. This private museum, completed in October 2019, includes more than 130 accounts of espionage from our country’s founding to contemporary times. Broken down by era, the museum covers the American Revolution, the American Civil War, World War I, World War II, the “Golden Age of Soviet Espionage,” the Cold War, and post-Cold War periods.

A Center within ODNI, NCSC is the nation’s premier source for counterintelligence and security expertise and a trusted mission partner in protecting America against foreign and other adversarial threats. CLPT leads the U.S. Intelligence Community (IC) in its efforts towards greater openness and accountability, helping guide decision-making on how the IC can offer greater insight into its activities, and perform our vital mission more effectively, while ensuring the sometimes-necessary secrecy our work requires.