Phosphorus is one of the six chemical elements constituting life forms. It is involved in the structure of DNA and RNA, cell membrane, bones and teeth. But, unlike the other “life elements” such as oxygen, hydrogen, carbon, nitrogen, and sulfur, in earth-crust, the phosphorus occurs in insoluble minerals. That is why animals and plants replenish their needs in phosphorus at the expense of other organisms, their dead tissues or vital activity products.

Particularly abundant is phosphorus in black soil rich in organic compounds. However, the most fertile soil eventually becomes exhausted, and it needs periodic fertilizing. People have been knowing this from the ancient times. In the agricultural societies farmers used compost and manure. The Native Americans and Australians used to burn grass and mix ashes with the soil. In Europe, until the middle of the 19th century bone flour had been widely used.

In the 1840s, near Cambridge, English geologists found phosphorus-rich coffee-colored round formations in sedimentary rocks, which turned out to be phosphorite. Through the decades more than two million tons of phosphorites were mined. They were sorted, washed, ground, and treated with acid to form superphosphate – a first chemical fertilizer.

Phosphate ores made an agricultural revolution. For the first time it made it possible to produce food almost in every place on the planet where there was sufficient water. Starting from this moment mankind started to enhance rapidly and totally depend on the fertilizers. The phosphorites were added to the soils and to cattle and poultry food. Hundreds of geologists explored the Earth searching for new deposits of “fertility stones.”

In the 1870s on the East Coast, in Charleston, the first phosphate mines were discovered. After 10 years, the geologist found large deposits in Florida. Still, a considerable amount of the phosphorus for American agriculture is being delivered from there.

Massive phosphorite deposits were found in the Western United States, in China, in the Middle East, in Europe, Africa, Australia, and in the Atlantic Ocean and Baltic Sea. This had an important role in the 20th century during the “Green” Revolution when more productive crops became available.

While geologists had been discovering new deposits and fertilizer plants increased capacities, there was no need for worries. A first warning sign was in the 1990s when the phosphorite source in the tiny Pacific island Nauru, which provided fertilizer for Australia and New Zealand, ran out. After that the phosphate industry in the USA decreased. The major exporter of this product became an importer.

A real “phosphorus catastrophe” happened in 2008 when due to global economic crisis and rumors on the exhaustibility of raw material resources phosphates prices increased by 800 percent.

Historically, phosphorus fertilizers used to be cheaper than those potash or nitric that required natural gas. This resulted in strong dependency for developing countries. Now, even phosphates became expensive. The hunger threat of the 21st century came upon Africa and Southeast Asia.

Since 2020, the market is in a fever again. The situation particularly worsened during the last months. Due to supply-chain disruption, export bans, and sanctions politics, phosphates prices increased four times.

In addition to the political aspects, there are certain technological reasons for the high prices of the fertilizers. Obviously, researchers should find a way to cheapen phosphate fertilizers production. Kazakhstan is not among the world leaders of phosphorus mining, export, or consumption. Nevertheless, Kazakhstan has a phosphorus industry of the two main ways of fertilizer production – extraction and thermal – and has a lot of researchers in this field. This is why the Kazakh researchers may potentially develop new technologies.

Extraction processing consists of decomposition of the phosphorites using mineral acids (mainly sulfuric) and is considered more efficient and eco-friendly. However, the phosphoric acid obtained during the process is rather diluted, which requires evaporation in order to concentrate the phosphorus. This expectedly enhances the carbon footprint.

A conventional extraction scheme is following:

Main expenses: 2 tons of sulfuric acid for 1 ton of fertilizers.

The scheme shown in Fig.1 may be significantly improved by changing the sequence of operations with sulfur. Instead of burning out the sulfur to the sulfuric acid for the phosphorite decomposition, it may be used for sulfidation of the phosphorus oxides to form P2S3 and P2S5. Then, burning of these sulfides results in SO2 and P2O5. The difference of their properties allows to easily separate them and to direct to the formation of sulfuric and phosphoric acids, respectively. In this way we don’t spend 2 tons of the sulfuric acid to obtain a ton of the fertilizers, but obtain them as a by-product. The proposed new scheme is shown in Fig.2. 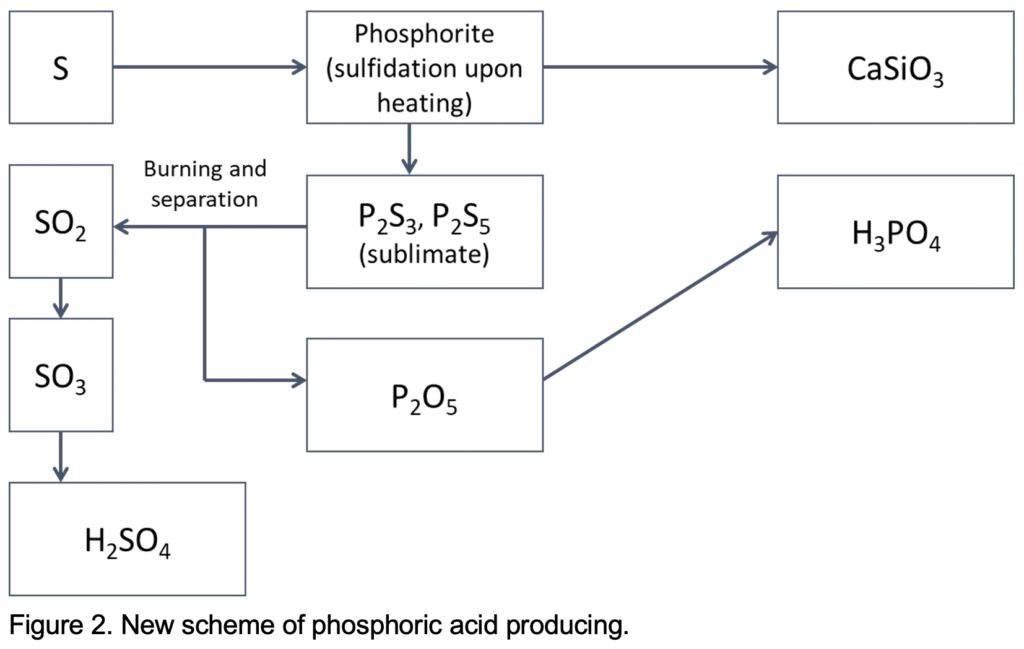 Analogous to the proposed process is a widely studied in Kazakhstan reaction of sulfidation of arsenopyrite concentrates.

Endothermic reaction for the phosphorite is following:

There are ways to decrease the heat consumption for this reaction.

Complete sulfidation of the phosphorite is highly endothermic:

If air oxygen is added in amount sufficient for the calcium to totally bind into the sulfate we obtain an exothermic effect:

Upon fulfillment of the new processing there are technical tasks that are yet to be solved, particularly, a fine air control or possible side reactions. But regardless of this, a predictable result is significant cheapening of the phosphorus fertilizers production for the benefit of humankind. The authors are open for promising collaboration proposals.

Baurzhan Duisebayev, Konstantin Polinovsky, and Tom Cellucci
Dr. Baurzhan Duisebayev writes about different technologies for effective extraction of metals from poor ores and/or waste materials. He has been a well-respected leader in both the private and public sectors for over 30 years. He coordinated all the research programs of Kazatomprom from 2001-14. Dr. Duisebayev has authored or co-authored 40 technological patents, and about 80 scientific articles. He graduated from Tomsk Polytechnical University (TPU) in 1982 and defended his candidate of science dissertation in 1985 in TPU and his Doctoral dissertation in 1997 in Irkutsk Polytechnical University. Dr. Duisebayev serves also as a Professor-lecturer for magistrates-geologists in the Kazakh National Scientific Research Technical University. Tom Cellucci writes about the intersection of emerging technology, commercialization, and implementation to protect the homeland. Dr. Cellucci has been a senior executive in both the private and public sectors for over 39 years. He served as the US Government’s first-ever Chief Commercialization Officer after turning around his fourth high technology firm, working for both President George W. Bush and President Obama. Thomas is a turn-around artist on Wall Street and serves on many global Boards. He also currently assists President Trump’s team when asked. Thomas has authored or co-authored 25 scholarly books and over 231 high-tech business articles. Cellucci earned a PhD in Physical Chemistry from the University of Pennsylvania (1984), an MBA from Rutgers University (1991) and a BS in Chemistry with Honors from Fordham University (1980). He serves on 23 Boards and is the recipient of many awards. He holds two endowed Chairs at prestigious universities in Kazakhstan, as well as taught at Harvard Business School, Princeton University and the University of Pennsylvania.