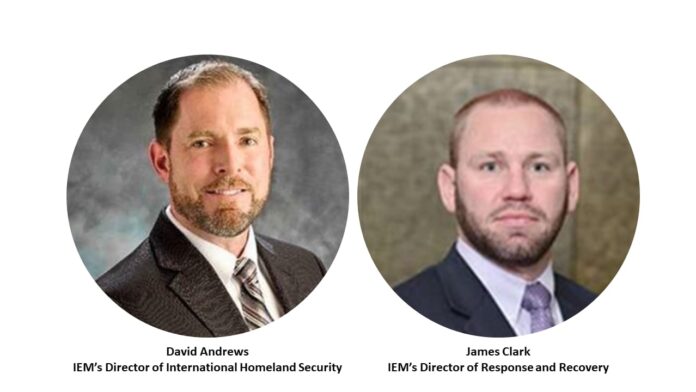 IEM, a tech-enabled global leader in disaster and crisis management consulting, announces the addition of two cornerstone members to the IEM Team. These hires will further the company’s growth as a leader in emergency management and homeland security.

“James Clark and David Andrews are incredibly accomplished emergency managers and we are excited to have them join IEM,” said IEM’s Vice President of Homeland Security and Emergency Management Bryan Koon. “IEM’s successes and accomplishments are driven by an amazing team of dedicated professionals and we are fortunate to add James and Dave to further advance our capabilities and expertise.”

James Clark is joining IEM as a Director of Response and Recovery. He brings over 13 years of experience across the disaster response and recovery spectrum with seven years in state government and six years in the private sector. Clark started his career in Louisiana at the Governor’s Office of Homeland Security and Emergency Preparedness (GOHSEP) in 2007. Over the last two years at GOHSEP, Clark served as the Assistant Deputy Director of Grants and Administration where he managed the State’s management cost expenditures. In this position, he led a finance team administering $100 million per month in grant payments and served as the Contract Manager for all disaster consulting contracts. In support of the GOHSEP’s response mission, Clark was designated by the Governor as the Alternate State Coordinating Officer for four major disaster declarations, led the procurement team for emergency assistance, and served as the State Emergency Operations Center (SEOC) manager.

David Andrews will serve as IEM’s Director of International Homeland Security. With over 20 years of experience, Andrews has been engaged in every facet of emergency management. He joins IEM with a well-rounded background in both the public and private sectors, having served in executive and senior leadership positions. Andrews has extensive experience developing and maintaining long-term partnerships as well as leading the planning and execution of response and recovery strategies. His experience in leading response and recovery activities associated with FEMA programs began in 2003 with the Alaska Division of Homeland Security where he served as Program Manager overseeing disaster recovery operations in the State. He was also appointed as the State Coordinating Officer for multiple disasters acting as the Governor’s senior official to coordinate policies and funding across all levels of government – federal, state, local and Native Alaskan – during declared disasters.

“I am thrilled to start this new journey with IEM and to join their team of exceptional emergency and crisis managers,” Andrews said. “IEM is a cutting-edge firm dedicated to innovating for a safe, secure, and resilient future, and I am excited to bring my expertise to the team.”