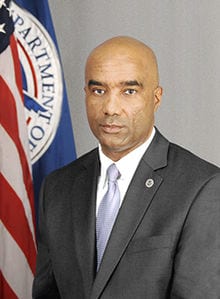 Rod Allison, the former Acting Deputy Administrator of the Transportation Security Administration (TSA), has joined CLEAR, the secure identity company using biometrics to build a frictionless and secure world, as Vice President of Operational Security.  In this newly created role, Allison will support the company’s ongoing efforts to strengthen homeland security, enhance key partnerships and delight members at every touchpoint across the CLEAR network.
CLEAR is changing the way consumers experience the world by transforming the cards in their wallet into a single biometric ID.  With CLEAR, your fingertips, eyes and face are your ID, credit card, ticket, reservation and more. Today, CLEAR members enjoy secure, frictionless experiences at 60+ airports, stadiums and other locations nationwide.
“Security has always been at the forefront of CLEAR’s mission and Rod has been on the front lines protecting the homeland his entire career,” said Howard Kass, CLEAR’s EVP of Corporate Affairs.  “His leadership and insight will be invaluable as we continue to deliver more efficient and secure experiences for our members and all travelers.”
Prior to joining CLEAR, Allison held a variety of leadership roles at TSA for more than fifteen years, including most recently as the Acting Deputy Administrator. During his tenure at the TSA, Allison also served as the Director of the Federal Air Marshal Service, Acting Chief of Staff, and Acting Chief of Operations, among other positions. He also has experience as a criminal investigator for the United States Postal Service. Rod began his career in the intelligence field with the United States Army, and he earned a bachelor’s degree from Fayetteville State University in North Carolina and a master’s degree at Webster University in Missouri.
“CLEAR’s vision for enhancing security and improving the customer experience is a natural extension of the work I did while at the TSA,” said Allison.  “After more than 30 years in government service, I didn’t expect to come out of retirement but when the chance to work with the CLEAR team presented itself, I jumped at the opportunity.”
Share
Facebook
Twitter
Linkedin
Email
Previous articleISIS Kids, Women Raise Flag of Terror Group at Syrian Camp
Next article46 Signs That a Person Might Be About to Unleash Extremist Violence