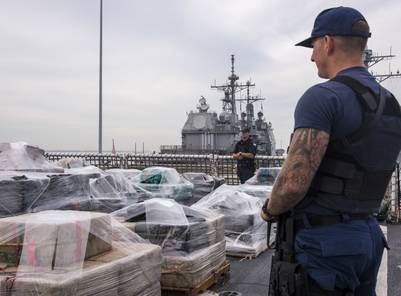 Today, the US Coast Guard (USCG) ended a record year in counterdrug operations as the crew of Cutter Waesche from Alameda, California offloaded more than 39,000 pounds of cocaine in San Diego.

“This impressive record not only reflects the extraordinary accomplishments of the men and women of the US Coast Guard but the continued threat our nation faces from transnational criminal organizations determined to move drugs into our country by any means necessary,” said Department of Homeland Security Secretary Jeh Johnson.

“These prosecutions erode and undermine the supply channels critical to the operations of drug kingpins who prey on our citizens with highly addictive drugs and spread violence throughout our hemisphere,” said Vice Adm. Fred Midgette, commander, Coast Guard Pacific Area. “From 2002 to 2011, information obtained from suspects apprehended by the Coast Guard contributed to the arrest and extradition of more than 75 percent of drug kingpins.”

The crew of the Coast Guard Cutter Waesche offloaded more than 39,000 pounds of cocaine worth over $531 million, which came from some of the Coast Guard’s final interdictions in FY 2016.In all, the crew turned over narcotics from 25 separate busts that occurred in the Pacific Ocean off the coasts of Central and South America.

This is the first self-propelled semisubmersible, or SPSS, interdiction by Waesche’s crew, which seized nearly 21,800 pounds of cocaine in FY2016. This is the seventh SPSS interdiction for the Coast Guard’s 418-foot National Security Cutters, the service’s newest and most capable major cutter class. This seizure marks nearly 86,000 pounds of cocaine, worth more than $1.5 billion, that has been intercepted by Alameda-based Coast Guardsmen in Fy2016.

The Coast Guard surged assets, including cutters and personnel, to known drug transit zones in 2014 as part of its Western Hemisphere Strategy. “This surge,” USCG said, “is aimed, in part, at combating the threat of transnational organized crime networks responsible for increased violence and instability in the Western Hemisphere. The gangs, cartels and other illegal organizations throughout the Western Hemisphere that make up these transnational organized crime networks have reach and influence throughout South, Central and North America.

The Coast Guard conducts counternarcotics operations as part of a US government effort to dismantle transnational organized crime networks. These efforts include Joint interagency Task Force South, which is a national task force that executes detection and monitoring of illicit trafficking across all domains; Eleventh and Seventh Coast Guard Districts in Alameda and Miami, respectively, which coordinate the interdiction and seizure of the narcotics and suspects; and numerous US Attorneys’ Offices that coordinate the investigation and prosecution of drug smuggling cases.