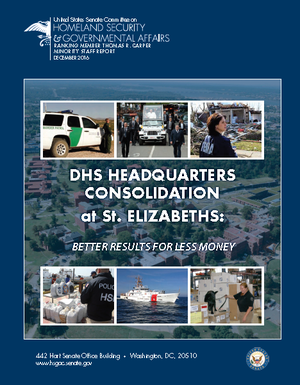 Completion of a consolidated Department of Homeland Security (DHS) headquarters at the St. Elizabeths West campus should save taxpayers $1.2 billion over 30 years and enhance the department’s coordinated national security efforts according to the new report, DHS Headquarters Consolidation at St. Elizabeths: Better Results for Less Money, released by Sen. Tom Carper (D-Del.), the senior Democrat on the Senate Committee on Homeland Security and Governmental Affairs.

“The headquarters consolidation project at St. Elizabeths is crucial to the success of the department and to realizing the unified, cohesive DHS envisioned by Congress when it created the department 14 years ago,” Carper said. “Bringing together key leadership and agency personnel in one, centralized location is critical to supporting DHS’s mission, reducing management challenges and making the department’s operations more efficient. Bringing together multiple DHS entities on onecampus will enhance national security and allow for a swift, coordinated response across the department when emergencies occur. It will also save taxpayers $1.2 billion over the next 30 years, which cannot be overlooked.”

Carper added, “Completion of the St. Elizabeths campus makes good financial and managerial sense and will build on recent efforts, including provisions passed in this year’s National Defense Authorization Act, to help make the department more than just the sum of its parts. Given its importance to the safety and security of all Americans, the completion of the St. Elizabeths consolidation project must remain a priority in the coming years for both Congress and the administration.”

According to the report, builders have made substantial progress constructing the consolidated headquarters. In 2013, for example, the Coast Guard moved into its new headquarters at St. Elizabeths. Renovations of the ‘Center Building, which will house the secretary and other key leadership staff are well underway and will be ready for occupancy in 2018. Congress has also appropriated funding for necessary infrastructure improvements, an addition to the Center Building, and reconfiguration of the Coast Guard building to accommodate more staff.”

“Progress, however,” Carper’s report said, “has been limited due in part to inadequate funding. As a result, the Obama administration proposed a new scaled back plan, called the ‘Enhanced Plan,’ for the headquarters consolidation project in 2015. The new plan would reduce the overall project costs by more than $800 million, accelerate the project completion by five years, from 2026 to 2021, and save $1.2 billion over 30 years. Congress has supported the new Enhanced Plan, fully funding the President’s budget request in 2016, which paid for the first segment of the new plan.”

“To date, St. Elizabeths has received nearly two-thirds of total funding needed and only three years of additional funding, including Fiscal Year 2017 funding, is required to finish the project,” the report noted, adding, “Lack of sufficient funding over the past several years has already delayed construction and increased costs. Agencies estimated that by 2012 insufficient funding for St. Elizabeths had delayed the project completion by more than 10 years and increased costs by $1.1 billion. It is essential that Congress fully fund the President’s FY 2017 budget request for St. Elizabeths to avoid further delays and cost overruns and keep delivery of St. Elizabeths under the Enhanced Plan on time and on budget. Failure to provide full funding in FY 2017 will delay construction and waste roughly $70 million due to increased construction costs and additional rent expenses due to the delay.”

Continuing, the report stated that, “As demonstrated in a 2014 report on St. Elizabeths by then Chairman Carper’s Majority Committee staff, a consolidated headquarters will improve the department’s ability to accomplish its mission and save taxpayer money in the long run. With most of the funding already appropriated, now is the time to fully fund the President’s FY 2017 request, instead of delaying the construction for a year and running up unnecessary expenses.

Carper said the President’s Fiscal Year 2017 budget request “fully supports timely completion of the St. Elizabeths project and includes $225.6 million for DHS and $266.6 for the General Services Administration [GSA] to construct a new federally-owned headquarters for FEMA, as well as renovate the Center Building Complex buildings, which would house additional leadership staff. To date, St. Elizabeths has received nearly two-thirds of the total funding needed and requires only three years of additional funding, including FY 2017 funding, to be finished. If fully funded, the project will be completed in 2021.”

But, “The delays associated with failure to fully fund the project in FY 2017 will force the government to pay roughly $70 million in unnecessary expenses which would not be incurred if the construction was funded so it could remain on schedule,” he said.