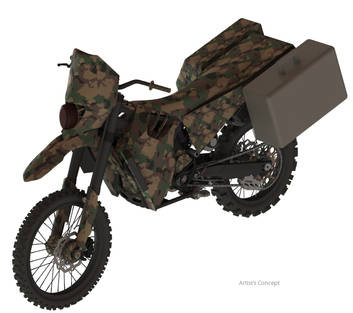 From executing Special Forces missions to patrolling the border, the Defense Advanced Research Projects Agency (DARPA) has big dreams for the Silent Hawk, the first prototype of a new hybrid-electric off-road stealth military motorcycle that also the potential for being used by US Border Patrol.

Logos Technologies announced DARPA, the research arm of the Pentagon, has awarded the company a Phase II Small Business Innovation Research (SBIR) award to continue development of the first of its kind hybrid-electric military motorcycle in partnership with California’s Alta Motors (formerly BRD).

“We are very excited about how this turned out,” Wade Pulliam, manager of advanced concepts at Logos Technologies, told Homeland Security Today. “The combination of our hybrid electric system and Alta’s all-electric bike helped make this deal possible.”

He added, “Putting those together we ended up with a 350 pound bike that will travel 170 miles total – 120 miles on gas and 50 miles on electric, which means that any time during the mission we can switch off and go on electric for a while and then switch back to fuel while the battery recharges as we continue along.”

Pulliam said that Logos elected to put a significant amount of power on board to allow the bike to maintain above 50 miles an hour continuously on a level road, which is useful in a number of situations for the military.

With a number of items on board, one of the main challenges in designing the bike was maintaining its balance. Logos succeeded, however, in adding second-wheel drive and number electronics while maintaining the balance of the bike.

One of Logos’ most significant accomplishments in designing the bike was getting all the hybrid electric parts onto a removable sub-frame, creating a highly customizable bike suitable for military purposes. The hybrid-electric unit can be easily attached or detached from the rest of the bike in just 30 minutes.

“If they decide to go out on a short mission and need extra maneuverability on the bike, they can pop off the sub-frame,” Pulliam said. “If they elect to go on a longer mission, they can easily put that back on. The concept of being able to completely remove the hybrid electric system and go back and forth between systems has never been done before.”

Although designed with Special Forces in mind, Pulliam indicated the bike may reach other markets as well, including border security.

“Border patrol is an interesting market for the bike,” Pulliamsaid. “There is a need there to close on suspects without their knowledge. The hybrid electric bike is a significant range extender for the all-electric bike. If your goal is all short distances, you would stick with the electric bike. But Border Patrol is an example of the need for extended range, so it would be a potential market for this.”

During Phase I of the program, which began in 2014, Logos demonstrated the suitability of its hybrid-electric system to meeting actual off-road power requirements. Since Alta’s motorbike was designed for off-road racing, Logos is confident that it will hold up to the military’s requirements.

“Alta’s all-electric bike was designed for off-road racing so we know it will hold up to the military’s requirements,” Pulliam said. “This was a great base for the start of the hybrid.”

The Logos-Alta team plans to proceed with an aggressive Phase II program plan, with the goal of developing and testing the first operational prototype in only 18 months.

“This award enables us to continue to execute a fast-paced development effort that takes advantage of our team’s prior work, superior technical approach, and extensive experience,” Pulliam said in a statement.