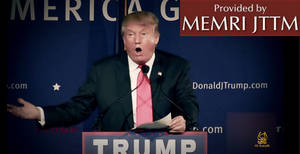 On the first day of the new year, Al Shaabab, the Somali-based Al Qaeda affiliate, released a recruitment video aimed at African Americans, urging them to convert to Islam and to either make hijra—a migration—or wage jihadi operations where they live.

According to the Middle East Media Research Institute (MEMRI), the video featured GOP presidential candidate Donald Trump calling to ban all Muslims from entering the US in the wake of the recent terrorist attacks in Paris, France and San Bernardino, CA.

The video, titled “The Path to Paradise: From the Twin Cities to the Land of the Two Migrations,” is the second of a series featuring Somali-Americans from Minnesota who have joined Al Shaabab in recent years. Part 1 was released in August 2013.

MEMRI said the video includes segments from a previously released message by slain Yemeni-American Al Qaeda in the Arabian Peninsula cleric Anwar Al-‘Awlaki. In that message, Al-‘Awlaki called on American Muslims to make hijra or carry out jihad operations where they live, saying, “You either leave or you fight,” and warning them that the US will in future create “concentration camps” for Muslims.

Trump commented on his inadvertent starring role in the video on Sunday morning on CBS “Face the Nation.” During the interview, Trump dismissed his appearance in the video, saying, “They use other people, too. What am I going to do? I have to say what I have to say.”

The Al Shaabab video surfaced not long after Hilary Clinton claimed during a Democratic presidential debate that Trump appeared in an ISIS video, raising concerns that his purportedly anti-Muslim rhetoric is helping to recruit radical jihadists.

Trump later posted the following tweet: “Al Shaabab, not ISIS, just made a video on me – they all will as front-runner & if I speak out against them, which I must. Hillary lied!” Clinton’s claim has not been proven.

The use of Trump by Al Shaabab in the video serves as an important reminder of the powerful role propaganda plays in terrorist recruitment efforts.