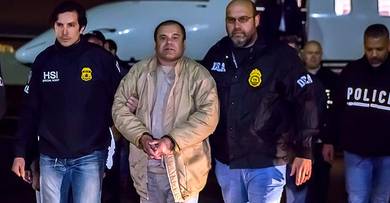 After years of hunting him down by both US and Mexican law enforcement and working out his extradition to the US, the leader of the Sinaloa Cartel, a Mexican transnational criminal organization, Joaquin Archivaldo Guzman Loera, known by various aliases, the most notable being “El Chapo” (Shorty), will face charges filed in Brooklyn, New York following his extradition to the United States from Mexico.

The charges allege El Chapo operated a continuing criminal enterprise and other drug-related crimes through his leadership of the cartel.

In response, Trump notified the FBI about El Chapo’s threat.

In May 2016, a protester at a Trump event in San Diego held up a sign decreeing the drug cartel will murder Trump. “If TRUMP wins He’ll be DEAD with in A week The Cartel won’t have his Bullsh*t,” the protestor’s sign read.

At the same protest, piñatas depicted Trump with his head severed, a trademark form of murder against opponents practiced by Mexican-based narco-cartels.

El Chapo, 59, arrived in the United States on January 19 and was arraigned on a 17-count superseding indictment on January 20 before US Magistrate Judge James Orenstein in federal court in Brooklyn. The case is assigned to US District Judge Brian M. Cogan. The charges in the indictment filed against Guzman Loera in the Eastern District of New York will be prosecuted jointly by the US Attorney’s Offices in Brooklyn and Miami and the Narcotic and Dangerous Drug Section of the Criminal Division.

The indictment alleges that between January 1989 and December 2014, Guzman Loera led a continuing criminal enterprise responsible for importing into the United States and distributing massive amounts of illegal narcotics and conspiring to murder persons who posed a threat to Guzman Loera’s narcotics enterprise.

El Chapo is also charged with using firearms in relation to his drug trafficking and money laundering relating to the bulk smugglingfrom the United States to Mexico of more than $14 billion in cash proceeds from narcotics sales throughout the United States and Canada. As part of this investigation, nearly 200,000 kilograms of cocaine linked to the Sinaloa Cartel have been seized. The indictment seeks forfeiture of more than $14 billion in drug proceeds and illicit profits.

“As detailed in the superseding indictment and other court filings, Guzman Loera and Ismael Zambada Garcia, as leaders of the Sinaloa Cartel, conspired to import more than 200 metric tons of cocaine into the United States,” the Justice Department’s announcement said. “The Sinaloa Cartel shared drug transportation routes and obtained drugs from various Colombian drug trafficking organizations, in particular, the Colombian Norte del Valle Cartel, the Don Lucho Organization, and the Cifuentes-Villa Organization. The cocaine was transported from Colombia via planes, boats, and submarines into ports the enterprise controlled in Southern Mexico and other locations throughout Central America. From there, it was shipped through Mexico to distribution hubs in the United States.”

The Justice Department said, “As one of the principal leaders of the Sinaloa Cartel, Guzman Loera allegedly also oversaw the cocaine, heroin, methamphetamine, and marijuana smuggling activities by the Sinaloa Cartel to wholesale distributors in Atlanta, Chicago, Miami, New York, as well as in various locations in Arizona, Los Angeles and elsewhere. The billions of dollars generated from drug sales in the United States were then clandestinely transported back to Mexico.”

Continuing, the Justice Department stated, “To evade law enforcement and protect the enterprise’s narcotics distribution activities, Guzman Loera and the Sinaloa Cartel allegedly employed various means including the use of ‘sicarios,’ or hit men, who carried out hundreds of acts of violence in Mexico, including murder, to collect drug debts, silence potential witnesses, and prevent public officials from taking action against the cartel. To intimidate and eliminate his rivals, during the Sinaloa Cartel’s internecine war for territory with the Juarez Cartel from approximately 2007 through 2011, Guzman Loera directed these assassins to kill thousands of drug trafficking competitors, during which many of his victims were beheaded.”

Kelly "commend[ed] the Government of Mexico — specifically President Peña Nieto, Secretary Luis Videgaray and Attorney General Raul Cervantes Andrade — and all those involved in his arrest more than a year ago as well as his seamless transfer from Mexican to American custody."

"I am proud to lead this department and to stand with the special agents of US Immigration and Customs Enforcement (ICE) Homeland Security Investigations and our many partners within the department of Justice who worked collaboratively with our Mexican counterparts to ensure that one of the world’s most wanted men will stand trial in a US courtroom."

“Guzman Loera is the alleged leader of a multi-billion dollar, multi-national criminal enterprise that funneled drugs onto our streets and violence and misery into our communities,” said Acting Attorney General Sally Q. Yates. “We are deeply grateful to the Government of Mexico for their assistance in securing Guzman Loera’s extradition. The Mexican people have suffered greatly at the hands of Guzman Loera and the Sinaloa Cartel; Mexican law enforcement officials have died in the pursuit of him. We will honor their sacrifice and will honor Mexico’s commitment to combat narco-trafficking by pursuing justice in this case.”

“Guzman Loera is accused of using violence, including torture and murder, to maintain an iron-fisted grip on the drug trade across the US/Mexico border that invaded our community and others across the country,” said US Attorney Robert L. Capers of the Eastern District of New York. “As a result, Guzman Loera made billions of illicit dollars. This prosecution demonstrates that we will apply all available resources to dismantle the leadership of dangerous drug cartels, wherever they operate, and will not rest until we have done so.”

“Guzman Loera is accused of terrorizing communities all over the world,” added US Attorney Wifredo A. Ferrer of the Southern District of Florida. “With this prosecution we stand united, with our domestic and foreign partners, in our fight against transnational criminal organizations that profit billions of dollars off of the toxic spread of illicit drugs in our global communities. Today’s announcement demonstrates that international borders do not protect narcotics traffickers from criminal prosecution. We will continue to work together to combat narco-trafficking and the cartels that infect our streets, with the long-arm of the law.”

“This extradition is a tremendous victory for the citizens of Mexico and of the United States,” said Drug Enforcement Administration (DEA) Acting Administrator Chuck Rosenberg. “Two principles stand out: No one is above the law and we simply do not quit in the pursuit of justice.”

“Through investigations led by our offices in New York and Nogales, Arizona, and the coordination efforts of our attaché in Mexico, Homeland Security Investigations gathered significant evidence that is instrumental in the case against Joaquin Guzman Loera in the United States for his alleged crimes as the head of the Sinaloa Cartel,” said ICE Homeland Security Investigations Executive Associate Director Peter T. Edge. “We are pleased to have worked with our federal law enforcement partners to bring about yesterday’s extradition, and look forward to sharing the evidence gathered in this investigation in the criminal proceedings that will follow.”

“One of the most dangerous and feared drug kingpins will now be held accountable for his alleged crimes in the United States after decades of eluding law enforcement,” said FBI Assistant Director in Charge of the FBI New York Field Office Charge William F. Sweeney. “After years of gathering evidence in multiple investigations, the FBI and our law enforcement partners will do everything we can to bring El Chapo to justice.”

“The US Marshals Service will undertake this mission with the same sense of duty that we have undertaken previous missions for the last 228 years,” said US Marshal Charles G. Dunne of the Eastern District of New York US Marshals Service. “We will preserve the integrity of the judicial process. We will protect the members of the Eastern District of New York family. We will secure this individual in a humane manner and we will bring him to court on time.”

The Justice Department noted that, “The case was investigated by the DEA, ICE and the FBI in cooperation with Mexican and Colombian law enforcement authorities. Substantial assistance was provided by the US Attorney’s Offices in the Northern District of Illinois, the Western District of Texas, the Southern District of New York, the Southern District of California and the District of New Hampshire. The Department of Justice’s Office of International Affairs also provided assistance in bringing Guzman Loera to the United States to face charges. The investigative efforts in this case were coordinated with the Department of Justice’s Special Operations Division, comprising agents, analysts and attorneys from the Criminal Division’s Narcotic and Dangerous DrugSection, DEA, FBI, ICE, the Bureau of Alcohol, Tobacco, Firearms and Explosives, the US Marshals Service, the Internal Revenue Service Criminal Investigation, the US Bureau of Prisons and the New York State Police.”

The United States would like to extend its appreciation to the Government of Mexico and, in particular, President Enrique Peña Nieto, Secretary of Foreign Affairs Luis Videgaray Caso and Attorney General Raul Cervantes Andrade for their assistance in this case.

Bringing El Chapo is also the result of the ongoing efforts by the Organized Crime Drug Enforcement Task Force (OCDETF) a partnership that brings together the combined expertise and unique abilities of federal, state and local law enforcement agencies.

The principal mission of the OCDETF program is to identify, disrupt, dismantle and prosecute high level members of drug trafficking, weapons trafficking and money laundering organizations and enterprises.