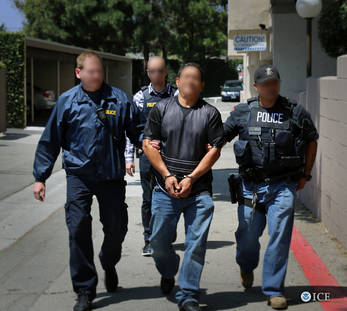 Fifty fugitives — some really bad actors — sought for their roles in known or suspected human rights violations were arrested this week by Immigration and Customs Enforcement (ICE) during a nationwide dragnet.

ICE among those arrested across the nation included:

ICE said it “credits the success of this operation to the combined efforts of the National Central Bureau-Interpol Washington, US Marshals Service, Department of State Diplomatic Security Service, US Citizenship and Immigration Services and Customs and Border Protection.

ICE stated it’s “committed to rooting out known or suspected human rights violators who seek a safe haven in the United States. ICE’s Human Rights Violators and War Crimes Center (HRVWCC) investigates human rights violators who try to evade justice by seeking shelter in the United States, including those who are known or suspected to have  participated in persecution, war crimes, genocide, torture, extrajudicial killings, and the use or recruitment of child soldiers. These individuals may use fraudulent identities to enter the country and attempt to blend into communities in the United States.

Over the last four years, ICE’s Human Rights Violators and War Crimes Center has issued more than 67,000 lookouts for individuals from more than 111 countries and stopped 161 human rights violators or war crime suspects from entering the United States.

NCATC also provided critical investigative support for the latest fugitive arrests, including criminal and intelligence analysis from a variety of sources. NCATC provides comprehensive analytical support to aid the at-large enforcement efforts of all ICE components.

Members of the public who have information about foreign nationals suspected of engaging in human rights abuses or war crimes are urged to contact ICE by calling the toll-free ICE tip line at 1-866-347-2423 or internationally at 001-1802-872-6199. They can also emailHRV.ICE@ice.dhs.gov or complete ICE’s online tip form.