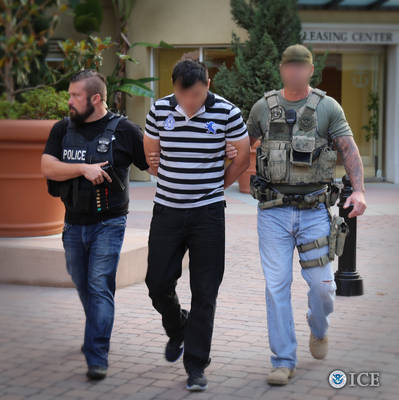 Twenty-seven criminal foreign fugitives with active INTERPOL “Red Alerts” were arrested across the United States this week by Immigration and Customs Enforcement’s (ICE) Enforcement and Removal Operations (ERO) office and the US Marshals Service (USMS).

The Department of Homeland Security (DHS) announcement said, “Those arrested are from 13 different countries and wanted for crimes abroad. Of the 27, five are wanted for homicide, two for kidnapping, one for raping a child and one for human sex trafficking.

“Criminals who create mayhem here in the United States or abroad should understand that law enforcement is a global partnership,” said ICE Director Sarah R. Saldaña. “We will find them, and we will bring them to justice.”

The arrests occurred nationwide in nine states during a three-day sweep, which took place Tuesday through Thursday, DHS said, adding, “Those arrested fell squarely into the agency’s enforcement priorities, which ICE officers prioritize and enforce every day.”

“The arrest of these foreign fugitives should send a strong message to anyone attempting to avoid prosecution for their crimes here in the US or abroad,” said USMS Director Stacia Hylton. “Our men and women were relentless in their effort to locate and apprehend these criminals. We hope our effort gives victims a sense of comfort in knowing these individuals are no longer on the streets.”

“Information-sharing 24 hours, seven days a week, 365 days a year among US law enforcement agencies like ERO and the USMS, along with the 189 other Interpol member countries and Interpol Washington, ensures transnational criminals have no place to hide,” said INTERPOL Washington Director Shawn A. Bray. “By facilitating the sharing of this information with our law enforcement partners, together, we will continue to enhance safety and security for US citizens and the global community.”

The ICE National Criminal Analysis and Targeting Center (NCATC) provided critical investigative support for this operation, including criminal and intelligence analysis from a variety of sources, DHS stated, noting that, “The NCATC provides comprehensive analytical support to aid the at-large enforcement efforts of all ICE components.

ICE credited the combined efforts of the US National Central Bureau—INTERPOL Washington, US Marshals Service, Department of State Diplomatic Security Service, US Citizenship and Immigration Services and Customs and Border Protection.

Members of the public who have information about these fugitives are urged to contact ICE by calling the toll-free ICE tip line at 1-866-347-2423 or internationally at 001-1802-872-6199. They can also file a tip online by completing ICE’s online tip form.