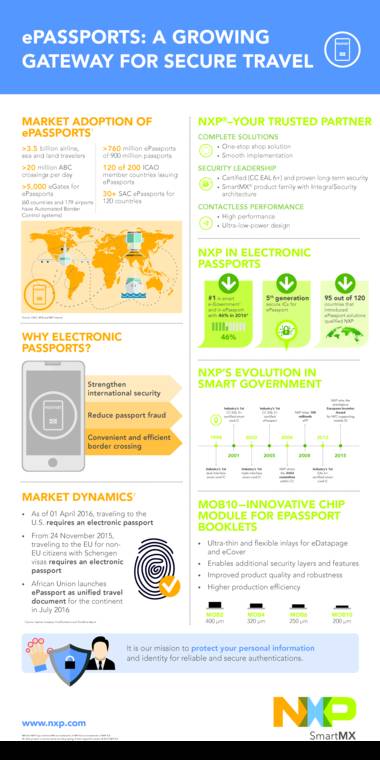 Out of 900 million passports issued, 730 million are ePassports, which now represent the majority of passports in circulation, reported NXP Semiconductors N.V., which has identified three distinct trends in electronic passports (ePassports or biometric passports).

According to the Department of Homeland Security (DHS), an ePassport contains an electronic chip which contains the same information that is printed on the passport’s data page: the holder’s name, date of birth and other biographic information. An ePassport also contains a biometric identifier. The United States requires that the chip contain a digital photograph of the holder.

DHS says, "All ePassports issued by Visa Waiver Program countries and the United States have security features to prevent the unauthorized reading or ‘skimming’ of data stored on the ePassport chip."

The first trend NXP sees on the horizon is “increasing functionality.”

“All ePassports use the same data format, known as the Local Data Structure (LDS), to store and ‘seal’ data to protect it from tampering,” the NXP trend report said. The data “embedded in the chip remains the same for the whole lifespan of the document and can’t be modified. A new format, called LDS2, which is a backwards-compatible extension to previous generations of electronic passports — and not far away from publication — will change that.”

NXP is involvedin the definition and standardization of ePassport LDS2, and has developed a solution that the company said “successfully passed initial ICAO compliance tests performed by the ICAO’s New Technology Working Group (NTWG).

NXP explained that, “It enables the digital storage of travel data such as electronic visas and travel stamps directly on the chip, and allows the complete passport booklet to be available in digital format. In addition, the read-and-write capacity allows new biometric data to be added. Countries will have more choice in national policy, and give people the option of submitting biometrics if they want to participate in a trusted-traveller program. Introducing the concept of passport applications opens up opportunities to efficiently automate the processing of passengers and their documents. This frees up time at borders so officials can attend to more high-value activities, and increase return on investment in the border-clearance infrastructure.”

The second trend NXP said it sees is “stronger security.”

“The European refugee crisis, the rise in international terrorism and the increase in criminal activity spiked the demand for stolen and forged passports,” NXP said, noting, “This development advances the distribution of ePassports on a global scale. Countries that already issue ePassports are looking to increase the security further. As a result, the future will see more data being transferred from the physical pages of an ePassport to the secure and tamper-resistant Integrated Circuit (IC). The IC is designed to resist attempts to steal, modify or misuse the data, and ceases to work properly if physically tampered with.”

“In reality,” NXP said, “the chip in the electronic passport has more capacity and functional flexibility than just supporting the ICAO 9303 protocols, which offers untapped opportunities to implement electronic forensic security features. It provides functionality that may be used on an international and/or national level, depending on feature implementation and international cooperation. Customer-specific functionality implemented in the chip can introduce additional security and efficiency in the process of border management and can elevate document security and fraud prevention to an unprecedented level.”

NXP explained that, “Answering the demand for leaner administration and stronger security, the ePassport is evolving from ‘just’ being a travel document to being a government-issued root credential for other applications, including a ‘virtual mobile identity.’ In the future, the single, secure digital ID, in combination with technology such as NFC, will allow ePassport owners to identify themselves and to interact with and authenticate applications via NFC-enabled mobile smartphones or wearable formats. ICAO is using the 9303 NTWG to work on potential future policies and standards for a ‘virtual mobile identity.’”

Finally, NXP said, “Future advancements in flexibility, accessibility, security and interoperability of the ePassport ecosystem will allow users to securely derive credentials to other electronic devices beyond passports, including mobile phones. For the secure chip in the document to serve these trends, ultra-thin design, larger memory, as well as higher cryptography and communication speeds are required.”