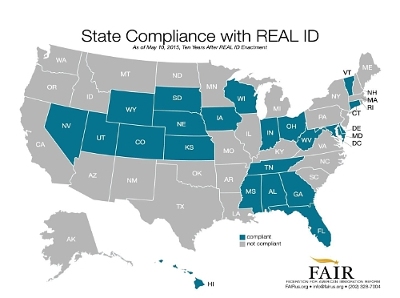 May 11 marked 10 years since President George W. Bush signed the REAL ID Act into law, and yet it still hasn’t been fully implemented because numerous postponements and waivers have kept key provisions from taking effect, the Federation for American Immigration Reform (FAIR) said this week, noting the original date for implementation of the law was supposed to have been May 11, 2008.

According to the Department of Homeland Security (DHS), the REAL ID Act was enacted in response to the 9/11 Commission’s recommendation that the federal government “set standards for the issuance of sources of identification, such as driver’s licenses.” The act established minimum security standards for license issuance and production and prohibits federal agencies from accepting for certain purposes driver’s licenses and identification cards from states not meeting the act’s minimum standards. The purposes covered by the act are: accessing federal facilities, entering nuclear power plants, and, no sooner than 2016, boarding federally regulated commercial aircraft.

Beginning this year, many federal facilities are supposed to require a Real ID for entry where identification is required. For more on the different phases of REAL ID enforcement, see DHS’s REAL ID F&Q.

Today, however, “not only are less than half of states compliant, but a growing number of them have enacted legislation to put licenses in the hands of illegal aliens, a practice that is thoroughly antithetical to the 9/11 Commission’s recommendations," said FAIR President Dan Stein in a statement. "From a national security standpoint, it is fair to say we are regressing, not progressing even as terrorist threats mount."

“REAL ID was intended to carry out key recommendations of the 9/11 Commission, which revealed that our nation’s permissive system of issuing driver’s licenses was a glaring vulnerability that was exploited by the terrorists who attacked the World Trade Center and the Pentagon,” a FAIR statement said.

Among the legislation’s provisions are measures that were designed to prevent illegal aliens from obtaining state-issued driver’s licenses and safeguards requiring that applicants for licenses and other documents prove their identity, birth date, legal status in the US, Social Security number and the address of their principal residence.

There’s little doubt that privacy rights advocates see a Big Brother like “national database,” while states see the REAL ID Act as an unfunded mandate, since the cost of recreating and re-issuing millions of licenses and ID cards falls on the states.

On December 20, 2013, DHS began what it said was “a phased enforcement plan for the REAL ID Act, as passed by Congress, that will implement the act in a measured, fair and responsible way.”

DHS has delayed enforcement of Real ID four times since it was originally supposed to go into effect in May 2008, and now has established Oct. 1, 2020 as the deadline when it will begin requiring people boarding an aircraft using a driver’s license to have a Real ID license.

DHS completed its final Privacy Impact Assessment on its rule to implement the REAL ID Act in 2008.

Today, according to FAIR, only 23 of the 56 jurisdictions that issue licenses are REAL ID compliant. Twenty-seven states or US territories are noncompliant; however, they are committed to becoming REAL ID compliant before the end of the year, FAIR said. They were supposed to be compliant in April, but received extensions until October.

“Worse yet,” the group stated, “ten states plus the District of Columbia now issue driver’s licenses to illegal aliens while a growing number of local governments are issuing municipal IDs to illegal aliens. These state and local documents are being granted based on an assortment of unverifiable and easily counterfeited documents presented by illegal aliens.”

According to DHS, “states and other jurisdictions have made significant progress in enhancing the security of their licenses over the last number of years. As a result, approximately 70 percent to 80 percent of all US drivers hold licenses from jurisdictions that are determined to meet the act’s standards or that have received extensions. Individuals holding driver’s licenses or identification cards from these jurisdiction may continue to use them as before.”

FAIR said it is calling for:

"It is long past time for America to adapt 21st century technology to our vital identity documents. A decade after enactment of REAL ID, the American people are still waiting for their government to fulfill its promise to protect their security and their identities," Stein concluded.