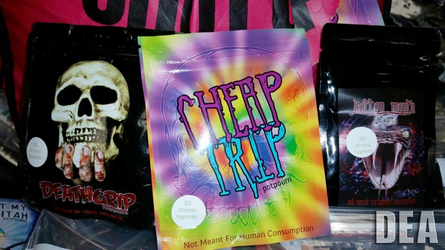 A 15-month, nationwide drug interdiction effort called Project Synergy III which targeted the synthetic designer drugindustry, including wholesalers, money launderers and other criminal facilitators, has resulted in 151 arrests in 16 states with more than $15 million in total cash and assets seized.

The Drug Enforcement Administration (DEA), Immigration and Customs Enforcement (ICE) Homeland Security Investigations (HSI), Customs and Border Protection (CBP) and other federal, state and local law enforcement were involved in busting this particular synthetic drug operation revealed that millions of dollars in US synthetic drug proceeds were going to “countries of concern in the Middle East.”

“This poison ruins and takes too many lives; this is incredibly dangerous stuff,” said DEA Acting Administrator Chuck Rosenberg. “Project Synergy III demonstrates our collective commitment to pursue those who produce and distribute this garbage to our children and I am grateful for the partnership of HSI and CBP on this operation.”

“For the past several years,” the Department of Homeland Security (DHS) said in an announcement of the busts, “DEA has identified over 400 new designer drugs in the United States – the vast majority of which are manufactured in rogue labs in China and sold on the Internet and in retail outlets such as smoke shops, gas station convenience stores and bodegas. Abuse of these psychoactive substances has resulted in ever-increasing numbers of overdose incidents and deaths.”

“The availability and illicit marketing of synthetic drugs creates the impression that they are safe and legal, when in fact they are neither,” said ICE Director Sarah R. Saldaña. “ICE is committed to working with our law enforcement partners to stop the flow of these highly dangerous drugs into our country. At the same time, we are equally concerned about getting the word out – especially to young people — about the dangers, and potentially deadly consequences, of using these substances.”

“With the alarming growth of these synthetic drugs, CBP’s National Targeting Center, Laboratory and Scientific Services and Office of Field Operations bring expertise and innovative contributions to the US government’s effort to keep these dangerous narcotics off the streets,” said CBP Commissioner R. Gil Kerlikowske. “CBP personnel continue to serve on the frontline, protecting the American public from designer drugs, a highly dangerous and deceptive group of psychoactive substances, specifically designed to skirt around existing drug laws.”

CBP’s National Targeting Center “played a significant role in the success of this operation,” DHS said, adding, “CBP was responsible for identifying and targeting high-risk express consignment shipments coming into the United States and suspected of containing synthetic drugs.

DHS and DEA said synthetic “cannabinoids” represent the most significant class of new designer drugs that, according to the National Forensic Laboratory Information System (NFLIS), increased from 23 reports in 2009 to 32,784 reports in 2013 and more than 37,000 reports in 2014.

DHS said, “The contents and effects of synthetic drugs are unpredictable due to a constantly changing variety of chemicals used in manufacturing processes devoid of quality controls and government regulatory oversight.”

Editor’snote: More photos from the Project Synergy III operation can be seen here.