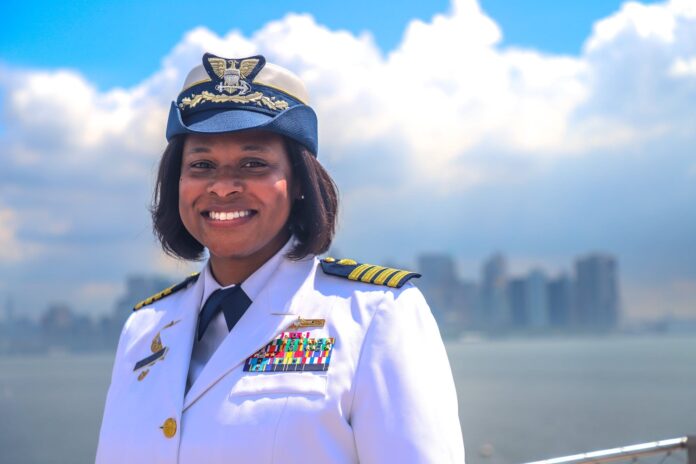 The protests. The picket lines. The headlines reporting disturbing arrests and mistreatment by police and jailers. It was 100 years ago that the persistence of women leading the fight for equality who refused to give up, go away, or be silenced, finally paid off. On August 18, 1920, the 19th Amendment to the U.S. Constitution was ratified and women finally had the right to vote.

This week, as we celebrate Women’s Equality Day, two U.S. Coast Guard leaders lend a few words of wisdom as they continue that American tradition of persistence and determination.

Merchant reported to Sector New York, one of the largest Coast Guard units on the East Coast, in May 2020. At the time she assumed the deputy position, New York City was struggling to overcome being the epicenter of the COVID-19 pandemic. She faced it with the conviction and perseverance her nearly 1000-member unit has already become accustomed to.

“I call it a unique time to be in a leadership position!” said Merchant.

The Coast Guard’s core values drove Merchant to join the nation’s smallest service more than 23 years ago in Jackson, Miss., though it looked different back then.

“I always had a passion to serve,” she Merchant. “But there weren’t a lot of females when I first joined the Coast Guard. That was hard. Even as a junior officer, I learned that I cannot do it alone. I had to have mentors. The key was knowing the importance of identifying and finding a mentor, even if they didn’t look like me; because at the time, that mentor didn’t exist.”

Now, “the armed forces’ best kept secret,” is how Merchant describes the service in which she acts as a mentor to females who look up to her for inspiration.

“We have a service in which there’s no operational rating that’s closed to females,” said Merchant. “Compared to other services, we’ve been leading in that realm for a long time.”

As Coast Guard leadership has prioritized diversity in the service’s ranks to reflect the diversity of the very population they serve; leaders have learned they must face the challenge of retaining women and minorities head on.

“We’re making strides recruiting the diversity we need, but our challenge now is the retention of those females and minorities in our service,” said Merchant. “The best thing we can do right now is to continue investing in their future. A part of my success is owed to the opportunities that I had, be it operating and working in some of the Coast Guard’s largest units around the country, or special assignments that allowed me to branch out and keep me competitive in the service.”

Along with that investment, Merchant says the need to be flexible toward supporting women in the service is crucial to retaining them. Once such initiative is the new surge staffing program, allowing a command to bring on a reservist to fill in for an active duty member on parental leave.

“This flexibility means there’s no reason for women to feel guilty in making the decision to take the allotted leave or temporarily separate to care for a newborn child,” said Merchant.

Merchant, who is only the third African-American woman in the Coast Guard to achieve the rank of captain, is part of the less-than 3 percent of women that make up the entire global maritime workforce.

“When you have a woman, and specifically a woman of color in a senior leadership position representing the Coast Guard in one of the most diverse cities in the nation, it not only inspires junior members in the Coast Guard, but also inspires the community in which we serve,” said Merchant. “This opportunity is not about me, it’s about paving the way for them as well.”

Just 83 miles away, Capt. Van Camp helms one of the busiest recreational boating waterways in the country as Commander of Sector Long Island Sound.

With an unprecedented rise in recreational boating deaths and injuries in the Northeast this year, Van Camp took command of the 450 miles of coastline along Connecticut and Long Island in July 2020, at the height of a summer boating season unlike any other.

At her change of command, Van Camp expressed her enthusiasm to take on the new job, leading what she describes as “an incredible mix of mission and people.”

Coming from a maritime family through and through, Van Camp’s father was a U.S. Navy senior chief, and she credits part of her success to his mentoring.

“My dad used to tell me that I have a gift in the Coast Guard,” said Van Camp. “I have a passion and love for people which fuels what I do. There were times that I doubted whether I wanted to stay in. Honestly, I think everyone, not just women, have those doubts. It turns out my dad was right about the Coast Guard, and I’m incredibly lucky to do what I love every day.”

Reflecting on Women’s Equality Day, Van Camp speaks of her passion for supporting the success of women serving in the Coast Guard. With an empathetic eye on the women serving throughout the units in her area of responsibility, she knows it can be hard to be amongst only a handful of women at a unit.

“I’m concerned when I visit my remote units and there are only one or two females, many of whom are junior, that they might not always have the same support network and camaraderie as men,” said Van Camp. “It can be tough!”

Van Camp acknowledges that having a successful career in the Coast Guard while having a family and being a mom is a real concern among women in the service, and isn’t afraid to address it.

“Young servicewomen ask me, and I have asked myself: ‘Can I have it all?’ Meaning, can one have a successful career while growing a family?” said Van Camp. “While it may be difficult to achieve it all, you can get pretty close.”

Van Camp offers her own successes and challenges as an example.

“I’m living proof,” said Van Camp. “I have two wonderful children and an amazing husband who is my biggest supporter in the Coast Guard.  I’m a captain and sector commander of a major command, and I’ve had a very successful Coast Guard career; however, it didn’t come easy and it took a lot of grit.”

According to Van Camp, a major key to achieving success as a woman in the Coast Guard is supporting and mentoring one another.

“What helped me immensely were great mentors and advocates, both male and female,” said Van Camp. “Those men and women saw potential in me and challenged me professionally to help me grow as a leader and to seize every opportunity,”

Recognizing that women all have unique situations, Van Camp strongly believes in the power of women supporting each other and speaking up for one another.

“A united voice from women in the Coast Guard is a must,” said Van Camp. “Despite our unique situations, there is power in speaking with a common voice on issues that need to be addressed.

Van Camp has a call to action: “Leaders at all levels must maintain the positive momentum already established to affect change in our workforce culture and actively improve inclusivity and eliminate negative biases that create barriers for women in the workplace.”