When evaluating his retirement timeline, Uccellini said he considered how the NWS workforce and emergency managers have fully embraced Weather-Ready Nation and IDSS. 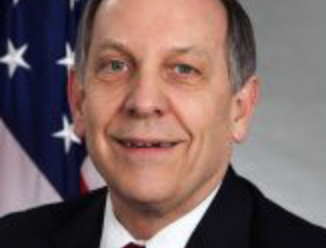 Louis W. Uccellini, federal scientist, global leader in meteorology and renowned expert and author on U.S. winter storms, has announced his plan to retire from public service on Jan. 1, 2022.

He has enjoyed a 43-year illustrious career in public service as a research scientist, day-to-day operational leader and senior executive, with 11 years at NASA and 32 years at NOAA’s National Weather Service (NWS). He has served as the NWS director for nearly nine years, having previously served as director for the agency’s National Centers for Environmental Prediction for 14 years. Combined with 10 years as a student and postdoc at the University of Wisconsin-Madison, Uccellini has dedicated more than 50 years to the field of meteorology.

“For more than half a century, Louis has been a force throughout the field of meteorology. He is someone I consider both a friend and a professional colleague,” said NOAA Administrator Rick Spinrad, Ph.D. “Louis has taken on many roles, including authoring numerous scientific papers and books on the complex nature of historical snowstorms, championing our Weather Ready Nation initiative, and as a respected leader beaming with pride for our scientists. Louis is a legend whose legacy will have a lasting and positive influence for generations to come.”

“I have lived my dream, from loving weather and yearning to be a meteorologist as a child to leading the most dedicated public servants in government at the National Weather Service,” Uccellini said. “As I reflect on this rewarding career and the talented people I have had the fortune to learn from and work with, I can’t believe how lucky I have been.”

Uccellini’s career path spans academia, research, research-to-operations, leading forecasting operations, and serving as a senior executive. He is leaving a legacy of more accurate and extended weather forecasts and a nation that is more ready and responsive to extreme weather, water and climate events.

“Through teamwork, we have advanced forecast skill and improved public resilience in the face of extreme weather beyond anything in my wildest imagination,” he said. “We continued the work of research giants from previous decades and built off the success of the NWS modernization in the 1990s and into the 21st century. Everything we accomplished together was possible because of the hard work and determination of our employees and the tremendous partnerships they cultivated with emergency managers and water resource managers at every level of government.”

Uccellini’s tenure as NWS director came during a time of rapid growth of the U.S. weather enterprise and evolution of the government agency, a period that also saw a rise in extreme weather as the world began experiencing the full effects and impacts of climate change. His first order of business as the new director in 2013 was to get the agency on a secure fiscal footing. He reorganized the budget structure so the agency would be better positioned to plan and execute its budget, and then he reorganized headquarters to better align support functions with the budget structure serving the needs of operational field offices. His priority was to equip NWS forecasters with the tools needed to deliver exceptional service to the American public with quality environmental data, upgraded weather, water and climate forecast models, the fastest supercomputers to power them and a reliable system to distribute weather forecasts and warnings.

The well-forecasted, yet still deadly 2011 tornado season prompted Uccellini and other NWS leaders to create a new strategic vision for America: A Weather-Ready Nation, one that is ready, responsive, and resilient to extreme weather. The initiative recognizes that exceptional forecasts alone will not save lives; rather, it requires a team approach across all levels of government and within the larger weather enterprise. A cornerstone of Weather-Ready Nation, championed by Uccellini, is the WRN Ambassador program, in which nearly 12,000 organizational and business leaders pledged to serve as examples, share information and inspire others to prepare for weather impacts in communities facing significant weather.

Under Uccellini’s leadership, NWS improved the connection between forecasts and warnings and public safety decisions. Listening to local officials, emergency managers and social scientists at a national “Vital Conversation” in December 2011, he realized that issuing weather forecasts and warnings alone did not provide enough information for people to decide when to take cover or evacuate. Soon after, NWS forecasters transformed their daily practices away from just issuing weather forecasts to communicating more consistently with local officials charged with making public safety decisions about what the local impacts of anticipated weather would be; five inches of snow at 9 p.m. in an urban area would have a different impact than five inches of snow during rush hour, for example. This concept became known as Impact-based Decision Support Services, or IDSS.

When evaluating his retirement timeline, Uccellini said he considered how the NWS workforce and emergency managers have fully embraced Weather-Ready Nation and IDSS, and decided that he had accomplished what he set out to do and it was time for him to pass the torch.

“I’ve seen a lot transpire in meteorology over my 50-year career; tremendous evolutionary changes have occurred in how we collect environmental data, how we process it, model it, and use it. All these changes have led to markedly improved forecasts,” Uccellini said. “ And we now see a Weather-Ready Nation Strategic Plan take hold and Impact-Based Decision Support Services directly influencing decisions across all levels of government to save lives and property.”

Uccellini also serves as the permanent U.S. representative to the World Meteorological Organization, where he led efforts to improve collaboration and linkages between nations in sharing information, infrastructure, and science-based services. Through his efforts and convincing based on the successful U.S. model, WMO members began fully embracing the private weather sector as an equal partner in the value chain. He also championed the global adoption of a global Weather-Ready Nations initiative through the U.S. State Department and USAID.

Uccellini credits three primary factors for a successful government career: First, he learned early to embrace teamwork to accomplish mutual goals, a concept he saw brilliantly play out every day at NASA and has championed throughout his years at NWS, both within the agency and between agency scientists and those in academia and the private sector. Second, he says that understanding the federal budget, planning, and execution process and working with those throughout the Executive and Legislative branches of the federal government is a fundamental part of leading, managing and building government programs. Finally, he says networking and mentorship are vital parts of navigating a career and can open new doors for learning, advancing and contributing.

One of Uccellini’s proudest career achievements was overseeing the 13-year effort to build the award-winning NOAA Center for Weather and Climate Prediction (NCWCP) at the University of Maryland. The facility, opened in 2012, is home to some of NOAA’s most important research and operations activities. Uccellini ensured that the building design encouraged collaboration among scientists and provided a more unified way to access data, and produce and distribute weather forecast products. NCWCP quickly became a bustling center for visiting scientists from across the nation and around the world and a place where students of the earth sciences could gain valuable experience and mentorship. Also during this time, Uccellini’s 10-year effort with Paul Kocin culminated with the publication of their widely known 2-volume monograph, “Northeast Snowstorms,” which is viewed as a gold standard for the explanations of the historic Nor’easters that impact millions of people along the I-95 corridor from Virginia to New England.

Among Uccellini’s other career highlights and accolades, he served as the president of the American Meteorological Society from 2012-2013 and has been honored with a number of prestigious awards, including the NASA Medal for Exceptional Scientific Achievement, American Meteorological Society research and public service awards, the American University Roger W. Jones Award for Executive Leadership, the U.S. Presidential Meritorious Executive Rank Award in 2006 and the Presidential Distinguished Rank Award in 2016. In 2019, he was selected as a National Academy of Public Administration Fellow. In 2020, he was cited as a top 100 Government Executive by the Partnership for Public Service.