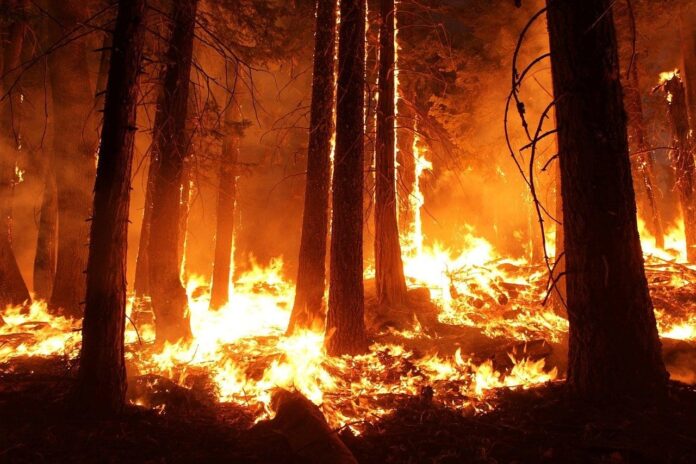 Recent studies pointing to a correlation between COVID-19 and air pollution have put the spotlight on the state of our atmosphere again. One of the least expensive and least disruptive ways to improve air pollution and reduce CO2 concentrations is by maintaining the world’s forests.

We all know that forest fires are increasing across the globe. Not only are these fires destroying the forests we need to help counter air pollution, they add to the pollution with increased smoke and harmful emissions. Smoke from the 2019-2020 forest fires in Australia killed ten times as many people than the fires themselves, and hospitalized many thousands, according to research published in the Medical Journal of Australia.

And smoke from the Amazon forest fires in 2019 spread as far as the Atlantic coast. The fires released a large amount of carbon dioxide, the equivalent of 228 megatonnes – the highest since 2010. They also emitted carbon monoxide – a gas released when wood is burned and does not have much access to oxygen.

Trees have always been intricately linked to the survival and flourishing of human societies: they give us clean water, they hold and protect the soil, they cool the air, they shelter the fauna.  But air pollution is only part of the story. From climate change to organized crime and the spread of infectious diseases, forest degradation is directly tied to a series of both national and global security risks:

Forests have a major effect on the Earth’s climate through greenhouse gas emissions resulting from the burning of wood and the forest’s capacity to draw carbon out of the air. This means that they have the potential to exacerbate or attenuate the security risks related to global warming.

Any doubt about the importance to security of reducing our carbon emissions was dissipated by a recent report, released by the National Security, Military and Intelligence Panel of the Center for Climate and Security (CCS), focused on the security challenges created by climate change across the globe. Some of the risks facing the U.S. include: costly damage to military and civilian infrastructure, lower agricultural output, increased tension on US borders, political instability and more. The report’s researchers are unambiguous on the urgency to reduce our greenhouse gas emissions in order to  avoid extreme security risks, both in the U.S. and globally:

‘’It is possible to prevent the worst of the scenarios laid out in this report, but this will not happen without clear-sighted, dedicated leadership. In the United States, we call for renewed efforts to prioritize, communicate, and respond to climate security threats, and to integrate these considerations across all security considerations.’’

The preservation of tropical forests is one of the most cost effective ways of reducing CO2 concentrations in the atmosphere. According to the report, ‘Tropical Forests and Climate Change’ from the World Resources Institute, proper protection and management could provide “23 percent of cost-effective mitigation action needed by 2030 to limit global warming to 2°C”.  The report continues that “at a cost of less than $100 per ton of captured CO2, tropical forests can deliver nearly two-thirds of the land sector’s cost-effective mitigation potential by 2030”.

On the other hand, if deforestation remains unaddressed, the ongoing destruction of tropical forests will limit our chances of avoiding the worst-case scenarios. The Amazon, the Congo, and the Indonesian rainforests will likely keep on degrading in the coming decades. Over time this will shift the rainforests from sinks to massive pumps of carbon dioxide, further destabilizing the climate and exacerbating all security threats related to climate change.

Water scarcity is going to be one of the main ecological challenges during the 21st century, impacting agricultural production, forcing mass migration and increasing tensions between countries. Forested catchments account for more than 75% of the world’s accessible fresh water.  Further forest degradation will intersect with other pressures on freshwater supplies and in many cases aggravate the aforementioned risks.

On top of this local resource, tropical forests in South America and Central Africa are influencing precipitation patterns across continents and oceans, bringing rain as far as the Midwest and the Northwest of the U.S. As the report ‘Effects of Tropical Deforestation on Climate and Agriculture’, published in Nature Climate Change, explains, temperature increases from deforestation can generate large upward-­moving air masses. “When these hit the upper atmosphere they cause ripples, similar to a tsunami.” the report states. “The exact impacts are highly uncertain, but models show: Complete Amazon deforestation would reduce rainfall in the U.S. Midwest, Northwest and parts of the south during the agricultural season. Complete deforestation of Central Africa would likely cause declines in rainfall in the Gulf of Mexico and parts of the U.S. Midwest and Northwest.”

Complete deforestation of the Amazon might sound like a stretch since today we still have 80 percent of its surface remaining. But scientists know that there’s a tipping point, beyond which its collapse could become unstoppable. The forest creates its own rain through evaporation during photosynthesis, driving colossal amounts of water from the Atlantic ocean deep into the continent.

Massive deforestation, especially in coastal areas could break this mechanism and hamper the ability of the forest to draw moisture from the ocean. Beyond a certain threshold, immense parts, or the entire forest could irreversibly collapse into a savannah. We don’t know where this line is yet. It could be five years of deforestation from now, it could be half a century away. The forests in Central Africa are in an even bleaker spot.

The disturbances to rainfall patterns created by the loss of tropical forests will impact the already concerning projections related to global warming. We understand that the biggest security risks are not about the average increases, but about the extreme events often created by converging factors. The disruption of these biotic pumps of water is going to have unpredictable consequences affecting numerous countries, and worsening already existing threats. Security risks associated with prolonged drought were also outlined in the recent CCS report:

“Southwestern North America already faces conditions of water scarcity, through a combination of warming temperatures, drying, and decreased precipitation. In near-term projections, these conditions will deteriorate as water stress and drought become more acute in the arid regions of Western U.S., Canada, and Mexico, with negative implications for crop irrigation in these regions. The communities along the U.S.-Mexico border face particularly dire drought conditions reported as the most extreme the region has experienced in the past century, along with consistently high temperatures.”

In addition to the climate change impacts, illegal deforestation also plays a significant role in organized crime. To date, INTERPOL operations have resulted in the seizure of more than 1 million cubic metres of illicit timber across Africa, Asia, Europe and Latin America.

Experts believe that organized criminals make more than $150 billion a year by illegally cutting down tropical forests, which prevents sustainable economic development in rainforest nations and has a major impact on the global climate.

The same routes used to smuggle illegal timber across countries and continents are often used to traffic weapons, drugs and people, frequently occurring hand in hand with other offenses such as document fraud, corruption, money laundering, violence and intimidation, and even terrorism.

What’s more, human encroachment into forested areas, driven by illegal logging, agricultural expansion and illegal mining, is increasing human contact with wildlife’s infectious diseases. As humans clear forests on a massive scale they run the risk of driving the transmission of infectious diseases, particularly when new habitats draw disease-carrying species out of the forest. Many viruses exist harmlessly with their host animals in forests, because the animals have co-evolved with them. Humans can become unwitting hosts for pathogens when they venture into or change forest habitat.

The preservation of tropical and boreal forests can dramatically reduce the severe security challenges we face.  In order to diminish these emerging security risks we need to slow down or halt the deterioration of the remaining forests and we need to prepare for those impacts that are now unfortunately unavoidable.

When it comes down to adaptation, there is a lot that can be done to mitigate the damage. Emphasis on soil management can improve crop resilience and decrease their sensitivity to weather variations. Better forestry management can reduce the occurrence and spread of wildfires fueled by extreme heat and drought. The development of drought or pest-resistant crops can save entire harvests. Individual actions aimed at reducing the consumption of goods related to deforestation are important, but they are unlikely to be sufficient or fast enough.

Clearly, forests and trees have a role to play in our national security and the U.S. is not alone – every country has a direct security interest in preserving the remaining rainforests. This should facilitate the implementation of urgent solutions, preferably through multilateral agreements. The U.S. is arguably in the best position to bring all parties to the table and lead this process in the coming years and decades.

Aleks Evtimov
Aleks Evtimov is a freelancer blogger and social media manager. In 2013 he decided to put his legal background and tech skills at the service of the environment. He manages English and French online communities and blogs focused on disseminating information about the various facets of the ongoing ecological crises. He writes primarily on the subjects of deforestation, climate change and international environmental law.