5 Times Terrorists Were Thwarted by ‘If You See Something, Say Something’ 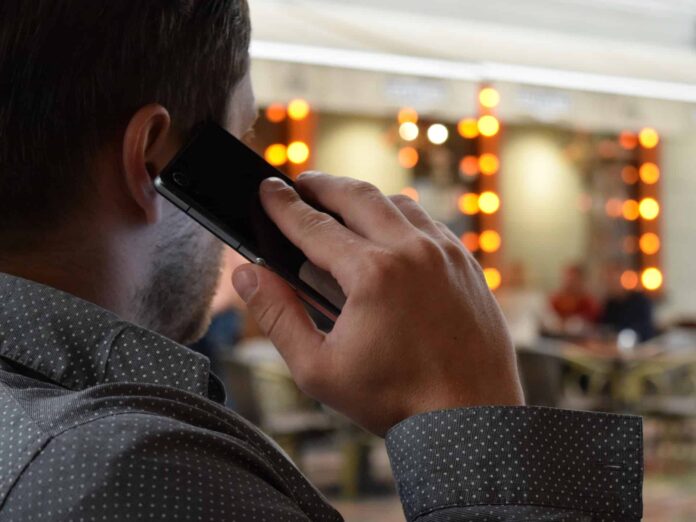 “If You See Something, Say Something” is more than just a campaign catchphrase, but the means by which terror plots have been disrupted and lives saved. Whether the ties bind as closely as relatives or the observer is no more than a casual bystander, these tipsters saw something that didn’t sit right and passed the information along to authorities.

Alexander Ciccolo was arrested by FBI agents on July 4, 2015, walking in Adams, Mass., with a knife tucked in his belt and carrying a duffel bag with two handguns and two rifles that he’d just picked up from a confidential human source. He was heading back to his apartment, where law enforcement would find partially constructed Molotov cocktails, two machetes, and a pressure-cooker that could be used to construct an improvised explosive device like the ones detonated two years earlier at the Boston Marathon.

Ciccolo discussed with an FBI source ways to inflict the most bodily harm with an attack, including packing IEDs with nails and glass and picking targets where crowds densely congregate like a college cafeteria or LGBT-friendly bar. After his arrest, while being processed at the Franklin County Correctional Center, he stabbed and wounded a nurse nearly a dozen times with a pen.

After pleading guilty in May to plotting an attack on behalf of ISIS, Ciccolo was sentenced earlier this month to 20 years in prison and lifetime supervised release.

The reason no one was ever wounded by one of his explosives or struck by bullets from that cache of guns is because Ciccolo’s father tipped off the FBI about his son’s growing ISIS obsession. In a sentencing memo, federal prosecutors noted that the decision for Boston Police Capt. Robert Ciccolo to turn in his own son was “heartbreaking” but a life saver.

The elder Ciccolo “understood that his son would likely be incarcerated for a long time, but also understood that he could be preventing harm to innocent people.” Ciccolo’s mother did not agree with the decision, saying last year that she believed he wouldn’t hurt anyone.

“In reaching the agreement with the defendant, the government recognizes the agonizing decision Captain Ciccolo made, which the government believes likely saved the lives of numerous innocent people,” prosecutors said. “Through the plea agreement, the government also hopes to encourage others to … report suspicious activity to law enforcement.”

A group of New Jersey guys stoked by watching ISIS videos together hatched a plot to form a homegrown “army” of terror operatives with potential targets including the World Trade Center, Times Square and the Vaughn College of Aeronautics and Technology in Queens, N.Y.

Nader Saadeh, Samuel Rahamin Topaz, Munther Omar Saleh, Fareed Mumuni, and Alaa Saadeh, officials said after their 2015 arrests, planned ways to support ISIS at home and abroad. But someone was watching their plotting, leading to the breakup of this terror boys’ club and the foiling of their nefarious activities.

According to the criminal complaint against Nader Saadeh, a roommate of the Saadeh brothers noticed marked changes in Nader’s religious orthodoxy and how “he would become offended and agitated by any conversation or mention of any religion other than Islam,” and heard Nader talk about his support for ISIS and justification of violent attacks. The roommate saw Nader using his computer to research ISIS and post messages supporting the terror group on Facebook, and watched Nader “become withdrawn, rebellious, hostile, and angry” as well as secretive – refusing to tell the roommate where he went to Islamic services and starting to speak in Arabic around the roommate even though it wasn’t his primary language.

Overhearing that Nader was planning to leave the U.S. soon, the roommate contacted the FBI and also let agents search the home computer used by Nader.

The case underscores how a longtime friend living under the same roof was best able to spot an alarming metamorphosis and provide that invaluable tip to authorities.

In April 2017, UK law enforcement stopped Khalid Mohammed Omar Ali – who had left his home in Britain to go fight and learn bombmaking with the Taliban in 2011, after telling his family he was just going to Birmingham, and returned in November 2016 with an attack on his mind – in Parliament Square.

“When he was searched he was found to be in the possession of three knives of varying lengths which he had only bought that same day. Two knives were found in right and left pockets of his jacket. The longest was removed from the waistband of the tracksuit trousers he was wearing,” prosecutor Brian Altman said in June. “The defendant went there armed with three knives for one reason only – to launch a deadly terror attack to strike at the very heart of this country’s democracy by killing a police officer, a member of the military or even a parliamentarian.”

After the March 2017 attack on Westminster Bridge by Khalid Masood, prosecutors said Ali began scoping out his potential targets including Parliament and the MI6 building. Five days after his April 22 reconnaissance work, police received the crucial tip – from his mom – that an attack was imminent with a matter of hours to spare.

Ali’s mother called the cops after finding several large knives in her son’s bedroom. Prosecutors said Fadumo Faji Adam said she “was scared he was going to kill the family” and wanted him out of the house. The next morning, police were ready as Ali bought new knives and headed to Parliament Square.

Ali was convicted of the terror plot and his Taliban bombmaking activities in June and was sentenced to a minimum of 40 years behind bars.

Just before last Christmas, a tow-truck driver with Marine Corps training from California’s San Joaquin Valley was arrested and charged with plotting to launch a holiday attack on a popular tourist spot in San Francisco. Everitt Aaron Jameson of Modesto, Calif., indicated on social media that he was inspired by the Halloween attack on a Manhattan bike path, in which Sayfullo Saipov plowed into the crowd with a rented pickup truck and killed eight people.

And it was this social media trail, with his likes-and-loves of jihadist materials, that caught the eye of the tipster who would alert the FBI.

That alarming activity, beginning in September 2017, included giving heart-shaped approval to a Facebook image distributed by ISIS supporters that called for Yuletide attacks by showing Santa, a box of dynamite at his side, overlooking Times Square.

By October, Jameson was direct messaging the FBI source to offer his jihadi services – “I can blend in. Or shock and awe,” he wrote, according to the criminal complaint, noting, “I am a tow truck driver. So I can make these services available as well.” He boasted of being versed in The Anarchist Cookbook and offered $400 of his monthly take-home pay to ISIS. And he offered “something along the lines of New York or San Bernardino” in a combination attack on San Francisco’s Pier 39: Officials said he discussed using explosives to drive fleeing crowds into an ambush. Christmas, he declared, was the “perfect day” to attack.

On June 4, Jameson pleaded guilty to charges connected to the attack plot. Last month, he was sentenced to 15 years in prison and lifetime supervised release. And thanks to a sharp eye, no pier-goers fell victim to a Christmas terror attack – underscoring the importance of saying something when suspicious activity is seen someplace as vast and difficult to monitor as the internet.

On May 5, 2010, Faisal Shahzad of Bridgeport, Conn., parked a blue Nissan Pathfinder near the Minskoff Theatre in New York’s Times Square and left the vehicle running with the emergency lights blinking. Packed in the rear of the SUV were 250 pounds of fertilizer, three 20-gallon propane tanks, two 5-gallon gas cans, dozens of M-88 firecrackers, gunpowder and two alarm clocks intended to trigger the concoction.

Just two minutes after the car bomb was deployed, though, alert street vendors noticed something amiss. Alioune Niasse was selling photographs of New York. Lance Orton was selling T-shirts and Duane Jackson was selling handbags. They saw smoke and heard the pops of firecrackers coming from the car.

Shahzad, who said he was inspired by infamous American al-Qaeda recruiter Anwar al-Awlaki and trained with the Pakistani Taliban, was captured as he tried to fly to Dubai. He pleaded guilty to a slate of terrorism and WMD charges, and was sentenced to life in prison on Oct. 5, 2010.

“I didn’t see the car pull up or notice the driver because I was busy with customers. But when I looked up I saw that smoke appeared to be coming from the car. This would have been around 6:30 p.m.,” Niasse later described. “I thought I should call 911, but my English is not very good and I had no credit left on my phone, so I walked over to Lance, who has the T-shirt stall next to mine, and told him. He said we shouldn’t call 911. Immediately he alerted a police officer nearby.”

Jackson said he noticed the SUV because he wondered “what kind of knucklehead parked in the bus-turning lane.” Orton had a few words of advice for his fellow New Yorkers: “See something, say something.” 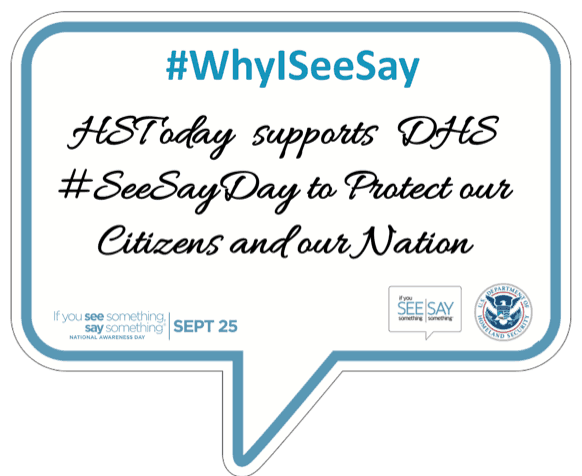 TODAY, SEPT. 25, IS ‘IF YOU SEE SOMETHING, SAY SOMETHING’ NATIONAL AWARENESS DAY

GTSC and HSToday encourage you to include awareness about DHS’ “If You See Something, Say Something” National Awareness Day in your newsletters, briefings, or workplace. Go to www.dhs.gov/SeeSayDay for toolkits for your school, business, and family. Join the awareness effort on social media or simply download one of the Awareness Day toolkits to lead in your community. Use #HSToday so we can share your #SeeSayDay bubble sign!

To report suspicious activity, call local law enforcement or 911 in the event of an emergency. Submit online tips to the FBI here.