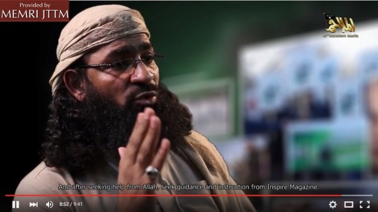 Adil Batarfi, one of Al Qaeda in the Arabian Peninsula’s (AQAP) senior commanders, issued a threat Tuesday against America and the West if they continue to blasphemy Islam.

Batarfi stated in the video, "But If You Return [The Aggression], We Will Return [The Punishment]," released by AQAP’s media arm Al Malahim “to continue targeting the US and the West ‘as long as the Western governments, and on top them America, continue to insult our religion and continue its support for the Jewish nation, which occupies Palestine, and as long as they aid the apostate rulers in the Islamic world.’”

In the video, Batarfi urged lone wolf jihadists in the US to seek guidance and instructions from AQAP’s English language magazine Inspire to carry out their attacks, telling jihadi adherents to "set your goals with precision and focus your strikes on the enemy’s joints. And after seeking help from Allah, seek guidance and instruction from Inspire magazine. For indeed it presents practical and efficient guidance. It places important directions in assuring the success of lone jihad in achieving planned goals."

Batarfi also expressed satisfaction over the decision of the French satirical weekly magazine Charlie Hebdo to stop publishing cartoons depicting the Prophet Muhammad. AQAP was behind the well-organized attack on the Paris magazine’s offices in January which killed 12 people.

Several weeks ago, Charlie Hebdo editor in chief Gėrard Biard told the German-based Stern magazine he would no longer publish cartoons of the prophet Muhammad, which AQAP said provoked the attack.

Speaking at a freedom of speech event in Washington, DC in May, Biard had stated, “The press suffer a lack of courage in this matter. We don’t want to be a symbol any longer … We can’t be the only ones to stand up for these values,” he said in response to the global media who accused Charlie Hebdo of deliberately provoking the jihadi attack.

According to the Middle East Media Research Institute (MEMRI), which monitors jihadi social media sites, “Batarfi praised Chattanooga [Tennessee] shooter Mohammad Youssef Abdulazeez, the Garland, Texas attack and the killings of people accused of blasphemy in the Indian subcontinent. He also called on all jihadi groups and lone wolves to attack the US, which he described as ‘the head of kufr and the caretaker of all corruption.’”

Like the deadly attack in Paris, the attack in Tennessee targeted an event where a contest was being held for the best cartoon drawn of prophet Muhammad, which was widely publicized prior to being held.

"By the grace of Allah, lone jihad has proven to be and will always prove to be a strategic weapon successfully hitting and penetrating the enemy’s fort,” Batarfi said in the video. “And the latest operation of Muhammad Abdulaziz, which occurred in the heart of American soil, is a clear evidence of that. He penetrated the base, killing and injuring American Marines in a blessed jihadi operation," he continued.