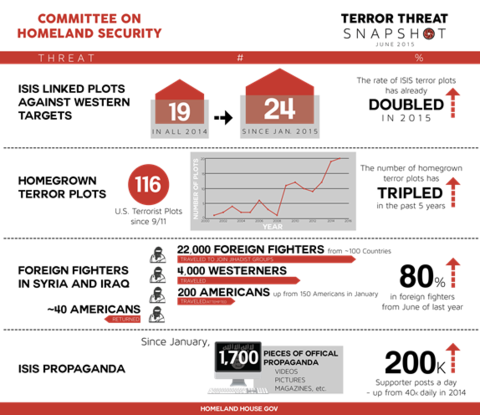 The “Terror Threat Snapshot” is a new, regular monthly product of the House Committee on Homeland Security that will track “the escalating and grave threat environment facing the United States, said committee chairman Michael McCaul (R-Texas).
McCaul said the Terror Threat Snapshot will be kept up to date on the committee’s website, and that monthly summarieswill be available.

“Terror threats to the US homeland have reached unprecedented levels,” McCaul said in announcing the Terror Threat Snapshot. “There have been 116 homegrown jihadist plots in America since 9/11— more than half ofthose have occurred in just the past three years.”

“Violent Extremism is going viral, but our response to it is moving at bureaucratic, sluggish speed,” McCaul added, noting, “It is time for President Obama to admit that—in this new age of peer-to-peer terror—we need a real strategy to combat radicalization at home and destroy extremist safe havens abroad.”

According to the inaugural Terror Threat Snapshot, 24 ISIS-linked plots or attacks against Western targets occurred in the first half of 2015, up from 19 in all of 2014.

Authorities have arrested or charged at least 39 individuals in the United States this year in ISIS-related cases. Over 80 percent of these cases, which include plotted attacks and attempts to join foreign terrorist organizations, have occurred or been discovered since 2009.

The cases involved individuals plotting attacks; attempting to travel to Syria; sending money, equipment and weapons to terrorists; falsifying statements to federal authorities; and failing to report a felony.

FBI Director James Comey recently said authorities have hundreds of open investigations of potential ISIS inspired extremists that cover all 56 of the bureau’s field offices. He also stated there may be hundreds or thousands of Americans who are taking in recruitment propaganda over social media applications: “It’s like the devil sitting on their shoulders, saying ‘kill, kill, kill.’”

Since the beginning of this year, ISIS has “pushed out more than 1,700 products — including videos, photographic reports and magazines over social media – as part its aggressively social media strategy “to recruit fighters, disseminate propaganda and trigger attacks in the West.

“There are an estimated 200,000 pro-ISIS messages posted on Twitter every day,” the snapshot stated.

Continuing, the committee’s snapshot of Islamist extremism said, “The risk of Islamist terrorists exploiting refugee and migrant flows to travel freely remains high,” as underscored in the recent arrest by Italian authorities of Abdel Majid Touil, a 22-year-old Moroccan suspected of being part of the terror network behind the March National Bardo Museum attack in Tunisi who arrived in Italy on a migrant boat and spent several months there.

According to the snapshot, “ISIS-aligned militants have been taxing migrant boat smugglers and using them to transport militants, according to a Libyan government adviser citing conversations with smugglers.”

In addition, “reports in 2014 indicated ISIS operatives had discussed using refugee flows into Europe as a ‘Trojan Horse’ for its operatives. Italian officials have reportedly expressed concerns over terrorists’ potential exploitation of these flows.”