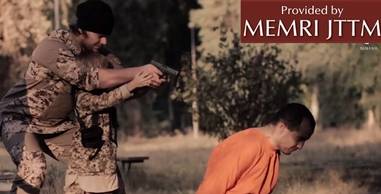 Western counterterrorism officials have known for years that jihadi organizations, especially the Islamic State (ISIS), have been indoctrinating children – including their own – to carry out jihadi suicide bombings in the name of Allah, whose religion they have been steeped in.

On September 19, 2016, this indoctrination of devout jihadists’ children took a new turn when the media office of ISIS in Ninawa Province released a 15-minute long video showing their childrens’ involvement in the confession and execution of men accused of spying for Kurdish intelligence, and providing it with information and coordinates of ISIS facilities and foreign fighters in Mosul, Iraq.

According to the Middle East Media Research Institute (MEMRI), which monitors jihadi social media, “The video, which is the third in a series titled, ‘If you Repeat [The Aggression] We Will Repeat [The Punishment],’ and was posted on leading ISIS-affiliated online Jihadi Forum Shumoukh Al Islam, shows the executions of three groups of accused spies in different locations and using different methods.” And, “All three executions are carried out in the presence of children.”

MEMRI reported that, “The first execution starts with a young man identifying himself as Saud Sa’d Hilal Al Nuaimi confessing that he had agreed to work for the Kurdish intelligence to collect information about ISIS and that he had recruited others as well. He addED that he and his group had recorded and uploaded an audio segment stating that they are members of a secret anti-ISIS group called Um Al Rabi’ayn. This group of eight is then beheaded by a masked man using a sword –with a blond child standing nearby.”

“The second group,” MEMRI said, “consisting of six individuals who confessed to providing information about ISIS operatives and receiving payments for their services, were executed by gunfire at close range. Two of the executioners for this group are children.”

Qusai Abdalla Al Dlaimi, one of the two men in the third group, confessed to providing information regarding ISIS booby-trapping facilities and named ISIS officials in the real estate and mosques departments and of foreign fighters. MEMRI revealed that, “Al Dlaimi was beheaded with a knife and the other man was shot in the back of his head by a young child with the help of an adult who is possibly the boy’s father.”

MEMRI Executive Director Steve Stalinsky told Homeland Secuity Today that, “Over the past few weeks, ISIS has put out a series of gruesome videos with its ‘Caliphate Cubs.’ Over the past year they have put out at least 20 such videos which {MEMRI has] documented. These kids represent the future of Isis — even if they continue to lose territory and are pressured from many sides — they have an entire generation now in place to work for the future of the Caliphate. Western security agencies should have on its radar the possibility they could be sent to attack inside the West.”

At the same time of the jihadi attacks on Charlie Hebdo in Paris, jihadi Boko Haram terrorists in Nigeria used female and child suicide bombers – one as young asten years old.

An Islamic State video translated by MEMRI shows a group of Bosnian youth — children of Bosnian jihadists fighting in Syria — who proudly proclaimed their allegiance to ISIS by holding the group’s infamous black flag and chanting, "Allah Akbar" and "the Islamic State is here to stay."

Shown playing with firearms, several of the children sent greetings to "Al Baghdadi and his lions," referring to Abu Bakr Al Baghdadi, the leader of the Islamic State and self-proclaimed Caliph.

"Send a message to the Crusaders of America: Your grave will be in Syria, our state is victorious,” the children chanted.