Profile of a Lone Terrorist: Who They Are, What They Believe, Why They Attack

The vast majority of lone terrorists leave a trail that includes hostile or aggressive behavior displayed before an attack or producing telltale writings or videos, according to a new study of lone offender terrorism by the FBI.

The Lone Offender Terrorism Report, produced by the FBI’s National Center for the Analysis of Violent Crime and Behavioral Analysis Unit (BAU), also notes that in a quarter of the 52 attackers from 1972 to 2015 studied for the report — 33 fatal attacks in which a total of 258 victims were killed and 982 were injured — at least one person was aware of the attacker’s planning or preparation process. 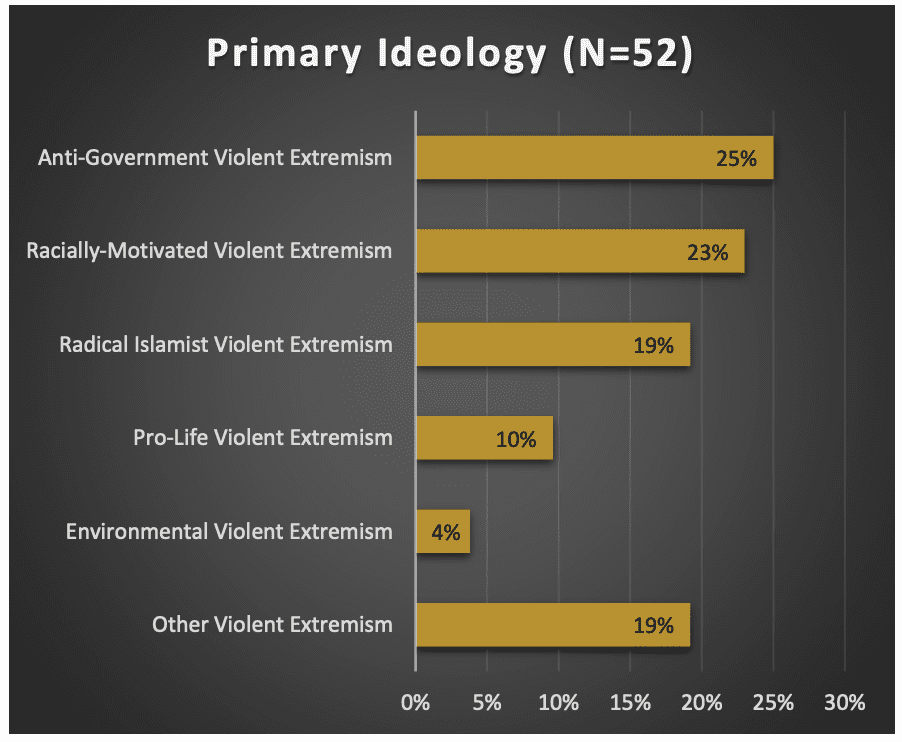 To be included in the study, offenders had to have been mostly radicalized in the United States and committed their attack here, and “must have been both the primary architect and the primary actor” in the attack, which must have been committed “in furtherance of an identified social, political, or ideological goal.” Some cases were excluded from the study because they lacked some information or were still in the investigation or adjudication process.

All of the lone offenders in the study were men, with widely varying personal characteristics such as as age (from 15 to 88 years old), race, relationship status, and educational background. “Consistent with conclusions reached by both academic and government researchers studying targeted violence, the study found no evidence to support the existence of any meaningful demographic profile of a lone offender terrorist,” the report states.

Ninety percent of lone offenders in the study were born in the United States, and 65 percent of all attackers were white; 13 percent were from a Middle Eastern background. Nearly three-quarters had never been married or were divorced or separated. A third had children, but only six of the 52 offenders had kids under their care in the year leading up to the attack.

Three-quarters of lone attackers completed at least some college, with only 8 percent not completing high school; fifty-four percent were not working nor attending school at the time of the attack. “These findings are consistent with BAU operational experience and direct interactions with previously-radicalized subjects, who have repeatedly cited the abundance of time and the lack of other responsibilities as a contributing factor to their radicalization,” the report notes.

Half of the attackers identified as being religious, and of those half were affiliated with Christianity while 35 percent were affiliated with Islam. Thirty-seven percent of all attackers had served in the military, and “there was wide variation among offenders in length of time served and in the quality of their performance during their military career.”

As far as criminal background, 70 percent had been arrested at least once as an adult and half of those served time as a result, and 52 percent had multiple prior arrests.

“While the majority of the offenders had not been previously arrested for a violent offense, most had previously exhibited behavior that was at the very least hostile or aggressive. More than half had previously engaged in physical battery or violence, either reflected in the offender’s arrest history or in accounts given by individuals who knew the offender,” the report continued. “Although prior violence was not present in all cases, operational experience has noted that the demonstrated willingness to use violence to resolve problems can suggest an enhanced risk of future violence.”

A quarter of offenders had been diagnosed with one or more psychiatric disorders, with depression or bipolar disorder the most common. “Researchers were unable to obtain conclusive data about how many offenders were receiving treatment, the types of treatment received, or offenders’ adherence to any prescribed medication regimens” because case materials don’t include medical records. In 35 percent of cases, people close to the offender suspected that he had an undiagnosed mental disorder — most than half of offenders displayed signs of paranoia. Forty percent had been suicidal at some point before the attack, and half had been engaged in drug use.

“…One significant sub-group of racially motivated violent extremists (n=10, 19%) use force or violence in violation of criminal law in response to their belief in the superiority of the white race and justify violence through a variety of political, cultural, and religious beliefs. Some believe the U.S. Government is conspiring with minority populations to bring about the demise of the white race and respond to this perceived threat through attacks on minorities and perceived race traitors, plots to overthrow the government, or efforts to establish a separate white homeland.”

Islamist offenders in the study may have been inspired by al-Qaeda or ISIS, “but were not following any direction or instruction from an FTO to carry out their attack.”

Included in the “other” violent extremism category were “two offenders (4%) were motivated by a self professed anti-liberal ideology and targeted organizations and individuals they perceived as promoting liberal causes or politics. Another two offenders (4%) were motivated by a violent anti-law enforcement message that appeared unrelated to any broader ideology (e.g., the anti-government sentiment held by sovereign citizens).”

Three-quarters of attackers “either supported more than one violent ideology or supported a violent ideology that involved multiple themes or components.” Most selected targets central to that ideology, and 79 percent picked soft targets with no or minimal security. Two-thirds of attackers used guns, while a quarter used explosives. Half had a family member of associate sympathetic to an extremist ideology.

“While rejection itself may not be unusual, more widespread rejection across multiple areas of an offender’s life may give insight into the way an offender interacts with others in their family and social network,” the report added. “Additionally, the way in which an offender perceives and reacts to rejection can be informative – either providing an indicator of resilience or stress. Even more noteworthy are situations in which an offender seems to fixate on or internalize one or multiple rejections as part of a larger grievance.”