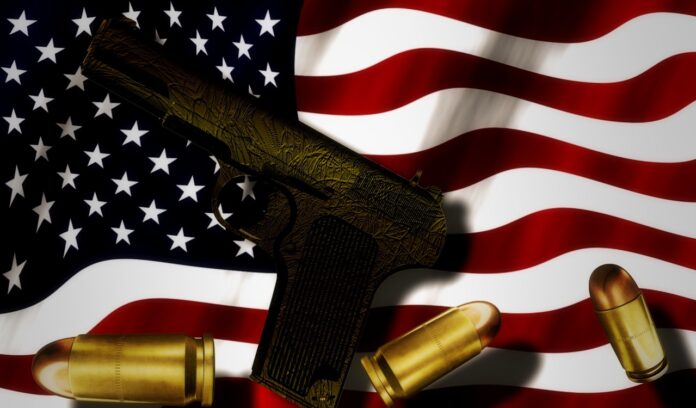 According to the nonprofit Gun Violence Archive, there have been 251 mass shootings in the U.S. so far this year. As residents of Gilroy, El Paso, and Dayton mourn the approximately 36 total dead and many more injured after three mass shooting over two weekends, one week apart, the country is once again grappling with questions of mass shootings and gun regulation. In the Q&A that follows, Stanford Professor and gun law expert John J. Donohue III, co-author of the report Right-to-Carry Laws and Violent Crime: A Comprehensive Assessment Using Panel Data and a State-Level Synthetic Control Analysis  discusses recent mass shootings, gun violence, and the state of gun regulation in the U.S. today.

The U.S. is an enormous outlier among affluent countries both in terms of gun violence in general and mass shootings in particular. Just to give a sense, in 2017 there were 15,658 gun homicides in the United States and 1 in Japan. While the good news is that overall crime is down from peaks in the early 1990s, public mass shootings are rising sharply in the U.S. and their lethality is growing as the power of the weaponry available in much of the country grows.

There is no reason to think that mental disturbances are more prevalent in the U.S. than in other affluent countries. When it comes to the type of public mass shootings we have seen in Gilroy, El Paso, and Dayton just in the last week, it is largely two unique features of the American landscape that play the most important role: 1) a gun culture fed by gun industry advertising that allows troubled young men to marinate in a brew of toxic messages that guns will make them powerful and help address their perceived problems; and 2) the availability of the high-powered weaponry that enables them to kill large numbers of individuals very quickly. Right now, the efforts to demonize immigrants for political gain are almost certainly adding to the toxic brew.

California Governor Newsom called for a renewed effort to pass federal regulations to control the availability of high-powered guns because it seems the Gilroy shooter purchased his firearms in Nevada, where laws are much more lax. What federal laws would you propose to decrease the number of mass shootings in the U.S.?

A renewal of the lapsed federal assault weapons ban would be a good place to start. It is deeply regrettable that George W. Bush reneged on his campaign promise of 2000 to renew the ban, which lapsed in September of 2004. While the law had many loopholes, it did wisely ban high-capacity magazines, which of course have done so much damage in recent shootings from Las Vegas to the three this past week. And while states like California continue to adopt “the wise restraints that make men and women free,” it is terribly unfortunate that nearby states provide havens for those who would circumvent California gun regulations. It is also unfortunate that some federal judges are intent upon eliminating these “wise restraints” with contorted and damaging interpretations of the Second Amendment.

In March of this year, a particularly error-filled and injudicious decision was handed down by a single federal trial judge striking down all of the state’s limits on magazine size. This will likely go to the U.S. Supreme Court, where four justices of the U.S. Supreme Court may support this folly. So the safety of Americans may well come down to the vote of Chief Justice John Roberts (and the health of Justice Ruth Bader Ginsburg).

Hopefully, Roberts will heed the admonition of federal Circuit Court Judge J. Harvie Wilkinson (a conservative Republican Reagan appointee), who wrote in voting to uphold the Maryland assault weapons ban: “Put simply, we have no power to extend Second Amendment protections to … weapons of war…. To say in the wake of so many mass shootings in so many localities across this country that the people themselves are now to be rendered newly powerless, that all they can do is stand by and watch as federal courts design their destiny—this would deliver a body blow to democracy as we have known it since the very founding of this nation.”

Is there a federal law requiring safeguards such as thorough background checks, licensing, training, insurance—like those required for say … driving a car?

While all the 19-year-old Gilroy shooter needed to do was drive to Nevada to buy his assault weapon, he would not have been allowed to buy a beer (or likely even rent a car) anywhere in the United States. The federal background check system for gun purchases that was initiated during the Clinton Administration was an important step in the right direction, but the gun lobby was able to largely undermine its efficacy by limiting its reach to sales from licensed gun dealers. As a result, federal law prevents a prohibited purchaser from getting a gun from Target but not from a private seller on the internet or at a gun show, which of course makes no sense. Americans (including NRA members) overwhelmingly would like to see universal background checks imposed throughout the U.S., and it is a troubling commentary on the state of democracy in America that gun sellers (not gun owners!) are able to thwart the will of the people to such an extent that the Senate majority leader will not even allow a vote on the issue.

We often hear calls to arm more people so that they can thwart gun aggression. What does the evidence show?

Armed and well-trained police showed their effectiveness in quickly ending the three recent mass shooting episodes—although sadly not until many had been killed or severely injured (because of the increasing deadliness of modern assault weapons). Certainly, one couldn’t expect untrained private citizens to do better than the police in these three cases, so it is clear that further steps are needed to reduce the probability of active shooter episodes and the deadliness of those that occur.

I heard nothing of any helpful role played by a gun carrier in El Paso or Dayton, despite the large number of carrying permits outstanding in those states. This is not surprising because these events unfold quickly, and even trained individuals have difficulty intervening against a homicidal killer with an assault weapon (recall the security guard at Parkland high school who did not move toward the shooter). A high proportion of the time that police engage such shooters they themselves will be shot or killed, so private individuals with guns who try to intervene face challenging odds (and have at times paid with their lives for doing so with no benefit to the public). Recall that the police officer who charged into a crowded bar to stop the Thousand Oaks massacre was struck by 6 bullets—5 fired by the gunman and 1 by a California Highway Patrol officer (and the first person killed by that gunman was the armed security guard in the bar).

You recently published a report on Right to Carry (RTC) laws in 33 states. What was the main outcome of your study?

My study examining the impact of right to carry laws highlights this concern: whatever benefit might come from gun carrying by private citizens seems to be more than offset by overall increases in violent crime. A number of recent studies have found that permissive gun carrying leads to higher rates of homicide and there is little question it leads to enormous increases in gun thefts that can further stimulate criminal activity. Indeed, while gun carrying has shown no ability to reduce robberies, states that adopt right to carry laws see increases in the percentage of robberies committed with a gun.

It is also worth remembering that almost all of the mass shooters from Columbine, Sandy Hook, Aurora theatre, Fort Hood, Washington Navy Shipyard, Isla Vista, Orlando nightclub, Las Vegas, Parkland High School, Virginia Beach, and the three episodes of the last week met the NRA definition of “law abiding citizens”––until they became mass killers. Much more needs to be done to keep guns away from such good guys.

The combination of the huge number of guns and lax regulation poses a significant challenge for law enforcement. Just as American criminals shoot faster because of the dangers posed by an armed population, so do the American police, who legitimately fear the prospect of facing an armed assailant. As a result, American police officers kill at far higher levels than their counterparts in other affluent nations. Consider this striking fact: “In the first 24 days of 2015, police in the US fatally shot more people (59) than police did in England and Wales, combined, over the past 24 years (55).” A well-regulated militia may be necessary to the security of a free state, but promiscuous and unregulated possession of firearms—including assault weapons with high capacity magazines—leads to many socially harmful consequences, as this past week underscored yet again.

John J. Donohue III has been one of the leading empirical researchers in the legal academy over the past 25 years. Professor Donohue is an economist as well as a lawyer and is well known for using empirical analysis to determine the impact of law and public policy in a wide range of areas, including civil rights and antidiscrimination law, employment discrimination, crime and criminal justice, and school funding.