The chief of the Office of Citizenship & Applicant Information Services at U.S. Citizenship and Immigration Services is confident that the expansion and improvement of technological services that have served as “force multipliers” thus far will prove invaluable in advancing her agency’s mission.

In the keynote address at the Government Technology & Services Coalition’s USCIS Day in McLean, Va., on Friday, Mariela Melero said she views her role as that of an engineer “because my job is to build bridges between technology and the access to that technology solution.” 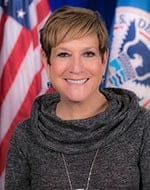 As USCIS customers are hoping for residency or citizenship, Melero recognizes that the agency must provide “meaningful moments of engagement” while “managing sensitive and delicate interactions.”

“We don’t have a team of thousands” but less than 400 – a team of “highly dedicated, committed, talented” staffers, she noted, and staffing hasn’t increased with the workload. Thus the mandate of moving all immigration forms to online filing and processing by December 2020 is “game-changing” as the opportunity to innovate and transform will allow USCIS to employ “sophisticated systems as force multipliers.”

“This endeavor is a huge corporate lift, but each division has a clear path,” Melero said, adding that she “can’t stress how hard the teams are working” to put the agency on the path to a full slate of digital products for the public.

Currently, about 40 percent of USCIS transactions are conducted online, including green card renewals and citizenship applications.

“This is really happening organically because they see the value in the experience,” Melero noted, emphasizing that 96 percent of people who file a form online have rated the experience good or better.

The USCIS online virtual assistant Emma – named for poet Emma Lazarus, whose lines from The New Colossus are inscribed on the pedestal of the Statue of Liberty – turns 3 years old in December, and last year was able to handle close to 11 million questions from website visitors.

Melero said the agency initially thought Emma would replace some pre-existing communication avenue, but instead the virtual assistant opened up new doors to innovation. Emma is constantly learning, and currently boasts a 6.27 percent “I don’t know” rate; the rate for Emma in Spanish is 8 percent. USCIS is working to get that rate down to 3-5 percent.

With 450,000 individuals checking their application status daily, “these platforms have to support this kind of activity,” Melero stressed.

“All of the forms launched so far contain the digital building blocks for future forms,” she said. USCIS will “push for even stronger adoption of new technology in the future” while helping build the comfort level for customers to use the online tools.

Artificial intelligence can deliver an answer in seconds that previously would have taken 24-48 hours for an agency response, she noted.

USCIS has a heart for service, Melero stated, and now as the systems catch up it’s a “very pivotal and exciting threshold” for the agency’s mission.

“This will definitely be an amazing achievement,” she said.