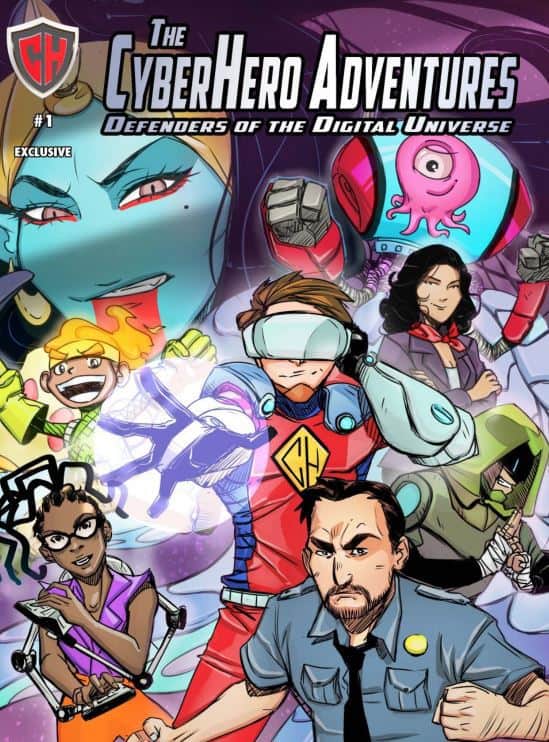 A man puts on a pair of virtual reality glasses and looks out into a crowd at a cybersecurity conference. He is told it’s a “neutral ground” conference where white- and black-hat hackers can meet free from the law’s interference. He looks around with the glasses and sees that some of the people no longer have their human forms. They’ve become multicolored alien creatures; the man is told that ‘s because the glasses he’s wearing allow him to see “different species of cyber schemers.”

If that seems a bit too fantastical to be a true story, that would be because it is the plot of a comic book.

The CyberHero Adventures saw its first 52-page comic book released in May at HACK NYC 2018. Created by Gary Berman, CEO of the Florida-based Cyberman Security, the comic aims to shine a light on the places where cybersecurity professionals succeed in protecting themselves, their networks and companies.

“The only time anyone hears about hacking or cybersecurity is when the bad guys win,” Berman said.

Cybersecurity was not Berman’s chosen field; in fact, it wasn’t until the past few years that the 61-year-old began to really learn about it. He used to be in marketing. And he recognizes just how hard it can be for many people to get into cybersecurity.

“One of the things I did to just learn about cybersecurity is I got a book called Cybersecurity for Dummies. Ten pages into the book and I was lost,” he said. “As good luck would have it I happened to be watching Spiderman at the movies, and then it hit me: superheroes.”

He describes the creation of the CyberHero Adventures as “two planets colliding.” The popularity of superheroes (Avengers: Infinity War broke several box office records this year, according to Forbes) and the importance and “ubiquity” of cybersecurity would create the opportunity for what Berman calls “a better way to communicate cyber hygiene and cyber safety.”

The first third or so of this comic is a fictionalization and exaggeration of Berman’s own story.

Berman said he had been the target of “sustained attack” for 15 years and suffered numerous losses due to hacks. He said there were over 19 attack vectors and at one point the attackers went as far as having 36 cars connected to his OnStar account listening to his conversations. He said it had created many losses for him as a marketing entrepreneur, but added that he understands that people “would be skeptical” of his story.

“The evidentiary trail was incredibly difficult to substantiate,” he said. “Especially considering I knew nothing about technology and even less than that, if that was possible, about cybersecurity until about two years ago.”

He shared what evidence he does have in a presentation at this June’s Gartner Security & Risk Management Conference in National Harbor, Md. It’s mostly screenshots and, as he notes, the investigation is still ongoing.

In December 2017, Berman met Samsung Electronics America’s Vice President of Software Sales Keith Fuentes at a Wall Street Journal Pro Cybersecurity forum. After hearing Berman’s story of the losses he’d incurred at his previous marketing position due to these hacks and seeing the evidence, Fuentes offered to give Berman Samsung’s Knox security platform built in to an unlocked Galaxy S8 and a DeX Station (which is Samsung’s desktop experience for mobile devices). The idea was to allow Berman to do the work he needed to do to get his comic off the ground without getting attacked, and would allow Samsung to get some opportunity to field-test the Knox.

“It’s really scary when you witness it,” Fuentes said. “I’ve been with him to see some of the craziness that is going on some of those devices.”

Fuentes described how Berman showed him a “brand new, out-of-the-box iPad,” fired it up — and then the moment he connected it to the internet and logged on to his personal account the device would be hacked.

Knox seems to have helped Berman, though both he and Fuentes said that the hackers haven’t stopped trying and have been finding other methods, like rerouting calls and texts to get at Berman.

Berman decided to include Fuentes in the CyberHero Adventures as “Agent K.” The character is lightly based on Fuentes’ own history, which he quite enjoyed getting to see.

“It was exciting for me to show something to my child that she could read and get an understanding (of cybersecurity),” he said.

Enter the world of superheroes

Berman is just as new to comics as he was to cybersecurity. In November 2017 he attended a comic convention in Miami that he said was an incredible, albeit very different, experience for him.

“I just felt this tremendous kind of appreciation for this whole aspect of culture that I was completely ignorant of,” he said. “If a picture is worth a thousand words, a comic is worth maybe a million.”

It was at this convention that he met Julio Alvarez and some of the team at Creature Entertainment, a comic and film studio based in Miami. Alvarez is credited in the book as product management for CyberHeroes.

“He just walked up to our booth (at the convention) and pitched his idea,” Alvarez said. “We liked the idea and we basically started working on the book pretty quickly after that.”

Alvarez said he helped turn the ideas and stories Berman had in mind into a more movie-like script for the comic. One of the characters in the book’s second half is “The Phisher,” an anthropomorphized version of a phishing attack.

“We’re trying to create villains and create fight scenes,” he said. “That’s not exactly easy because cyberwar is a lot of sitting down and typing at a computer. “

It takes some extra work to figure out how to translate concepts like phishing into exciting, action-packed moments, Alvarez said, but they’re working hard at it.

Currently a second, updated version of the first book is in the works, with plans for many more books to come. The plan is to go so far as to create what Alvarez described as a “universe,” which will describe all sorts of attacks and concepts shown with a diverse cast. Berman hopes to one day have animation work done with CyberHeroes and to use the comics as a freely shared teaching tool.

“I don’t want to be a vendor. I’m really not selling anything,” he said. “I want to be an advocate.”