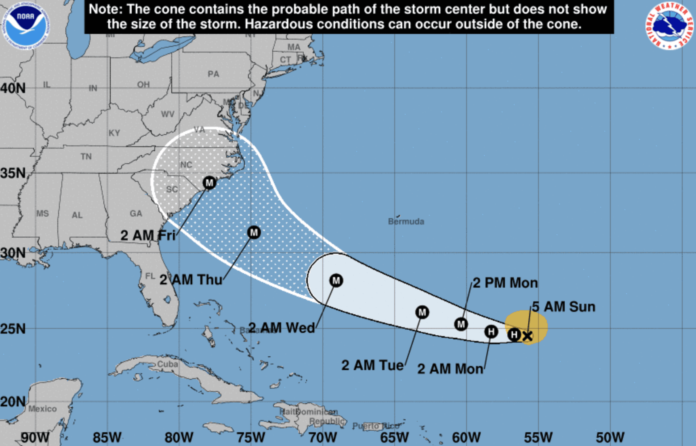 Florence is expected to become a hurricane today and is on track to hit the southeastern coast of the United States by Thursday, the National Hurricane Center said this morning.

“While the impacts of Tropical Storm Florence to Virginia are still uncertain, forecasts increasingly expect the storm to strengthen into a major hurricane that could seriously affect the East Coast and Virginians,” Virginia Gov. Ralph Northam said Saturday. “Accordingly, I am declaring a state of emergency so that we can begin to prepare state assets, and I encourage Virginians to monitor forecasts and make their own preparations now.”

A state of emergency allows jurisdictions to mobilize resources, including state National Guard, and pre-position people and equipment to assist in storm response and recovery efforts.

The NHC said that “a west-northwestward motion with an increase in forward speed is expected by Monday, and that motion is forecast to continue through mid-week.”

” On the forecast track, the center of Florence will move over the southwestern Atlantic Ocean between Bermuda and the Bahamas Tuesday and Wednesday, and approach the southeastern U.S. coast on Thursday,” the center said. “Maximum sustained winds are near 70 mph with higher gusts. Florence is expected to become a hurricane today and rapid intensification is likely to begin by tonight. Florence is forecast to become a major hurricane on Monday.”

Life-threatening swells generated by Florence are affecting Bermuda and are beginning to reach portions of the U.S. East Coast, the NHC said. Tropical-storm-force winds extend outward up to 125 miles from the center of the storm.

Stay tuned to the National Hurricane Center for the latest

Share
Facebook
Twitter
Linkedin
Email
Previous articleWATCH: For First Time Since 9/11, World Trade Center Subway Stop Reopens
Next articleWhat You Should Do ASAP to Prepare for a Hurricane