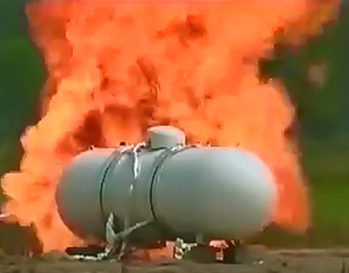 A Boiling Liquid Expanding Vapor Explosion (BLEVE) can occur if a propane, liquefied petroleum gas (LPG) or a natural gas tank is heated such as when engulfed in a fire, causing buildup of vapor pressure within the tank which overwhelms the ability of safety valves to allow the pressure buildup to escape. Flaming jets exiting a tank from a safety valve due to BLEVE are followed by a sudden explosion and fireball, as can be viewed in this video.

“Tank fragments can be tossed long distances as a result of the explosion,” said Aristatek, Inc, a leading provider of hazardous materials planning and response solutions in a new technical paper, Propane Brief, detailing the hazards of propane, LPG and natural gas that includes a BLEVE chart for safe standoff distances.

Indeed. Aristatek noted in its new technical brief that an 18,000 gallon propane tank explosion occurring on April 9, 1998 near Albert City, Iowa, resulting in the deaths of two firefighters and seven more injured. The explosion was invested by the US Chemical Safety Board, which found the tank was engulfed in flames shooting jets 70 to 100 yards into the air before the explosion. Fragments from the exploding tank killed two firefighters and narrowly missed or injured others. At least 36 (possibly 40) fragments were recovered some distance away, including off the 14-acre property site. The pressure relief valve (set at 250 psi) was working, but the Chemical Safety Board estimated the pressure inside the tank had built up to almost 1,000 psi before the explosion. The CSB report said the firefighters were too close.

Propane, LPG and natural gas are stored as pressurized liquids, but when their containers are heated during a fire, and those liquids exceed their boiling point, additional pressure causes their storage vessels to explode. This explosion is called a boiling-liquid, expanding-vapor explosion.

Aristatek’s new Propane Brief contains a ‘BLEVE Chart’ to determine safe stand-off distance based on various storage containers of these common gases. This chart along with other technical information in the brief is designed to help responders deal with BLEVE’s and other hazards associated with these substance.

The company is making this brief available at no cost to Hazmat teams, fire departments/firemarshals, sheriffs, LEPC/EMA officials or any other public safety/health professionals to assist in protecting their first responders. The document is available on Aristatek’s website.

“With good reason, the Emergency Response Guidebook for responders recommend that if a tank, railcar or tank truck containing a flammable liquid (including liquefied gas) is involved in a fire, the area should be isolated for ½ mile (800 meters) and public evacuation should be considered for that distance,” the company said.

Aristatek said its Propane Brief “was written to help with planning and responding to common incidents involving propane, LPG or natural gas,” pointing out that, “Propane, LPG and natural gas are very common substances involved in hazmat incidents, but they can have a devastating impact on the public and responders when they find an ignition source. As recently as this past May, two firefighters in Detroit were injured fighting a fire when a propane tank exploded. In another event in late June, a natural gas plant explosion in Mississippi gave off vibrations that could be felt over 10 miles away. Thankfully there were no injuries in that event."

“Gases like propane and LPG are extremely common,” said Aristatek CEO Bruce King. “However, if responders aren’t prepared and know the consequences of a BLEVE explosion involving these substances, they can easily be hurt or worse.”

“We actually took the BLEVE chart straight out of our industry-leading PEAC-WMD hazmat software,” King said, adding, “We felt like this resource was important enough that we should share it with all responders to make better, safer decisions in the field.”

This is latest technical brief from Aristatek since their first brief, Hazards Associated with Acrylonitrile, was released in August of 2015.

Aristatek was founded in 1999 by four chemists and engineers who conducted field scale research studies at the Nevada Test Site’s Hazmat Spill Center mandated by the 1986 Superfund and Reauthorization Act (SARA) and the 1990 Clean Air Act Amendments during the 1990’s, Aristatek has become a leading provider of CBRNE and HAZMAT response and planning solutions to the civilian and military market.