U.S. Hit with 18 Billion-Dollar Disasters So Far This Year

538 people died, which is more than twice the number of deaths from all billion-dollar disasters that occurred in 2020.

The United States saw an unprecedented 18 separate billion-dollar weather and climate disasters in the first nine months of the year, according to scientists with NOAA’s National Centers for Environmental Information

Not only was September 2021 quite warm, but it also brought with it devastating impacts from four of the 18 disasters: flooding from Hurricane Ida, landfall of Hurricane Nicholas, and ongoing drought and wildfires tormenting communities in the West.

The average September temperature across the contiguous U.S. was 67.8 degrees F — 3.0 degrees above the 20th-century average — making it the fifth-warmest September in the 127-year climate record.

Colorado and Rhode Island had a September that ranked third warmest on record, while California, Massachusetts, New Mexico, Utah and Wyoming logged a top-five warmest September.

The average precipitation last month was 2.33 inches (0.16 of an inch below average), which ranked in the middle third of the climate record.

Some extremes included Oklahoma, which had its ninth-driest September, as well as Pennsylvania and Massachusetts, which saw their seventh- and eighth-wettest Septembers on record respectively, due to the remnants of Hurricane Ida.

Year to date | January through September 2021

The year-to-date average temperature for the contiguous U.S. was 57.0 degrees F — 1.9 degrees above average — making it the 10th-warmest YTD on record. Maine had its second-warmest YTD, while California ranked third warmest on record.

Looking at the year so far, the average precipitation total was 23.58 inches (0.38 of an inch above average) and ranked in the middle third of the record.

Mississippi had its third-wettest YTD while Louisiana saw its fourth wettest. Meanwhile, Montana had its third-driest YTD on record, while North Dakota saw its fifth driest. 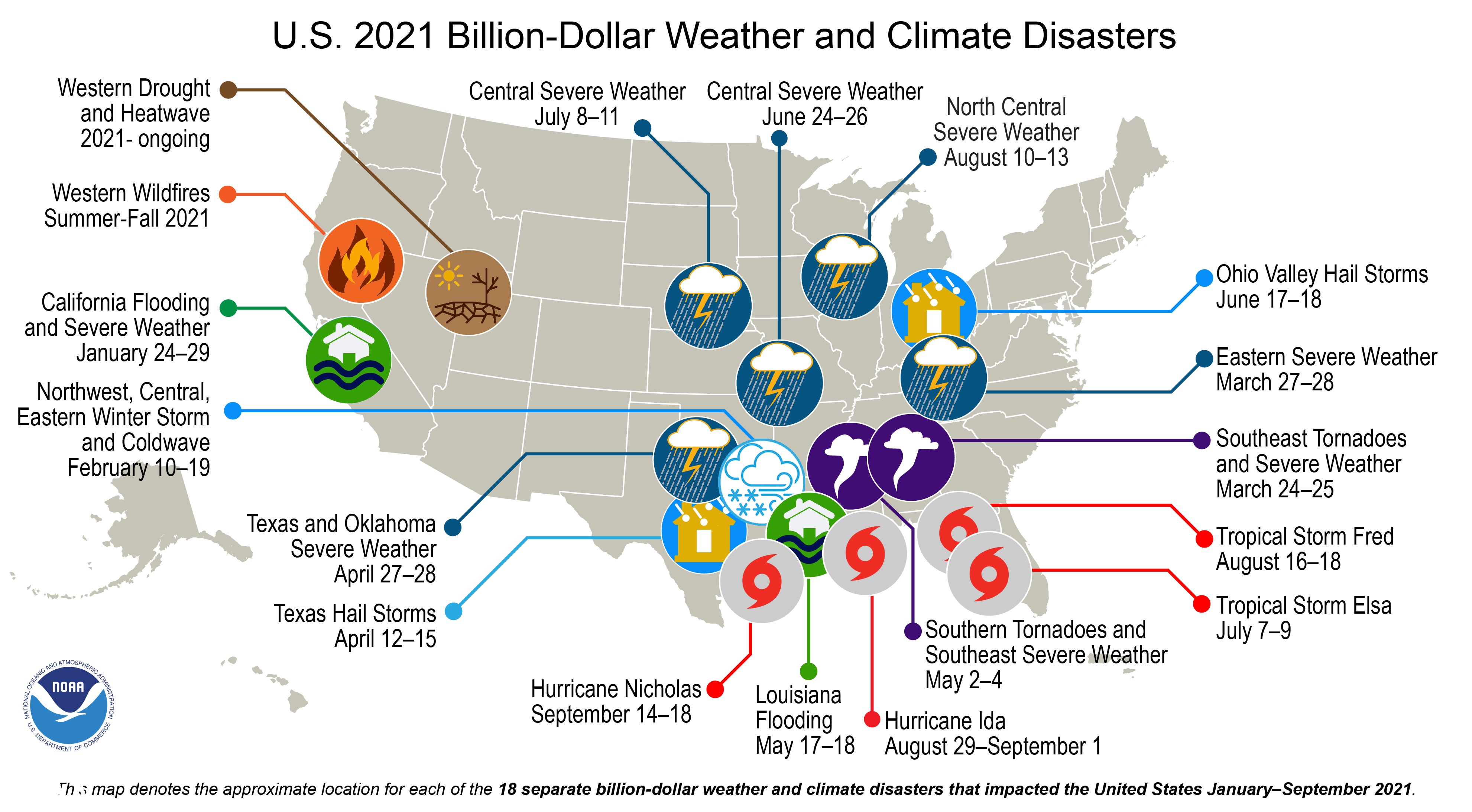 From January through the end of September, the U.S. has experienced 18 weather and climate disasters each incurring losses that exceeded $1 billion. These disasters included: nine severe storms, four tropical cyclones, two flooding events, one combined drought and heat wave, one wildfire event, and one combined winter storm and cold wave.

The loss of human life from these disasters is staggering: 538 people died, which is more than twice the number of deaths from all billion-dollar disasters that occurred in 2020.

Total losses due to property and infrastructure damage is up to $104.8 billion so far — eclipsing $100.2 billion incurred last year (adjusted for 2021 inflation).

The first nine months of 2021 have tallied the largest number of disasters in a calendar year so far, with 2021 currently placing second behind 2020.

This is also a record seventh-consecutive year where the U.S. experienced 10 or more billion-dollar disasters.

More notable takeaways from the report