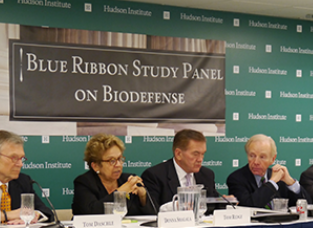 The co-chairs of the Blue Ribbon Study Panel on Biodefense said in a statement that the “current congressional oversight structure is severely fractured, resulting in reactive policymaking that threatens America’s ability to combat biological threats."

“The issues facing the safety of our homeland are a priority for Congress and the constituents you serve,” wrote panel co-chairman former Sen. Joe Lieberman and the first Department of Homeland Security Secretary (DHS) Tom Ridge. “However, the current congressional oversight structure is severely fractured, diluting focus and often resulting in reactive policymaking.”

The authors noted that two independent, bipartisan review Commissions – the Kean-Hamilton 9/11 Commission and the Graham-Talent WMD Commission – called for a more centralized oversight structure in Congress to provide a greater focus on national security programs.

[Editor’s note: For more on the Graham-Talent Commission, click here]

“While the House did create the Homeland Security Committee in response to the 9/11 Commission recommendations, jurisdiction of the agencies that were moved to the DHS remains with other committees,” their letter to session said.

“This decentralized framework does a disservice to Congress by diminishing its ability to effectively oversee and implement homeland security policy,” the letter continued. “As chairmen of the Blue Ribbon Study Panel on Biodefense, we have become increasingly concerned that more than 20 congressional committees have biodefense jurisdiction, but only a small handful spend any time actually focusing on biodefense. This selective oversight reflects insufficient congressional engagement related to many of the most significant biodefense challenges America faces.”

Lieberman and Ridge urged Sessions to provide the House Committee on Homeland Security with primary jurisdiction over DHS authorizations. A centralized focus on homeland security, they contend, is vital to ensuring the members of Congress can create meaningful policies that protect the homeland.

Ever since the 9/11 Commission made its recommendations, one of the contested and failed implementations of the recommendations has been to focus congressional oversight over DHS. More than a decade after 9/11, 92 committees and subcommittees of Congress have some sort of jurisdictional oversight of the department, which many officials and authorities have long complained has bogged down the ability to adequately oversee and respond to DHS’s problems and, requirements. Too many committees’ involvement, the’ve said, has impeded the original intent and mission of DHS.

In their letter to Session, the panel’s co-chairs wrote, “As you prepare for the organization of the 115 the Congress, we ask that you give special consideration to the jurisdiction of the House Committee on Homeland Security. The issues facing the safety of our homeland are a priority for  Congress and the constituents you serve.”

“However,” they stated, “the current congressional oversight structure is severely fractured, diluting focus and often resulting in reactive policymaking. Two independent, bipartisan review Commissions – the Kean-Hamilton 9/11  Commission and the Graham-Talent WMD Commission – called for a more centralized oversight structure in Congress to provide a greater focus on national security programs. While the House did create the Homeland Security Committee in response to the 9/11 Commission recommendations, jurisdiction of the agencies that were moved to the DHS remains with other committees.”

Lieberman and Ridge said, “This decentralized framework does a disservice to Congress by diminishing its ability to effectively oversee and implement homeland security policy.”

“As chairmen of the Blue Ribbon Study Panel on Biodefense, we have become increasingly concerned that more than 20 congressional committees have biodefense jurisdiction, but only a small handful spend any time actually focusing on biodefense. This selective oversight reflects insufficient congressional engagement related to many of the most significant biodefense challenges America faces,” Lieberman and Ridge told Sessions. “Conversely, fragmented jurisdiction has at times resulted in excessive interest, leading to unnecessary disputes over real and perceived legislative purview. Our panel identified major flaws in three DHS programs designed to protect Americans from biological threats; jurisdictional disputes, however, have adversely impacted Congress’ ability to provide unified oversight over hundreds of millions of dollars’ worth of such biodefense initiatives.”

Continuing, Lieberman and Ridge stated, “This situation is emblematic of Congress’ broader inability to reauthorize DHS in more than 15 years. The time has come to provide for a single, primary DHS oversight committee in the House and Senate so that proper congressional direction can be provided across the DHS mission space, and executive branch power can be checked.”

In conclusion, Lieberman and Ridge urged Sessions “to provide the House Committee on Homeland Security with primary jurisdiction over DHS authorizations. A centralized congressional focus on homeland security is vital to ensuring that members of Congress can create meaningful policies that protect the homeland.”

Congressional oversight of homeland security received a particularly harsh rebuke by an earlier report by members of the 9/11 Commission, who were reconvened by the Bipartisan Policy Center and Annenberg Public Policy Center of the University of Pennsylvania to update their original recommendations more than a decade ago.

The panel was unequivocal in stating that “Congressional reform is the most important unfulfilled recommendation of the 9/11 Commission” in their report, Today’s Rising Terrorist Threat and the Danger to the United States: Reflections on the Tenth Anniversary of The 9/11 Commission Report.

At the time, the panel chastised the “fragmented congressional oversight of DHS.”

“First and foremost is reform of Congress’s committee structure for overseeing homeland security,” the panel said in 2014, noting that it “predicted that of ‘all our recommendations, strengthening congressional oversight may be among the most difficult.’ Unfortunately, we were right. While the executive branch has undergone historic change and institutional reform, Congress has proved deeply resistant to needed change. It has made some minor adjustments, but not the necessary structural changes in oversight and appropriations for homeland security and intelligence.”

Continuing, the former 9/11 Commission members warned in their 10th anniversary report that, “Effective congressional oversight is especially important in areas, like homeland security, where much government activity necessarily occurs out of public view. Unlike other areas of policy, where the press and public can themselves monitor what their government is doing, the public must rely on Congress to be its eyes and ears with respect to sensitive and classified national security programs. Put simply: If Congress is not effectively overseeing these programs, no one is. Congress’s failure to reform itself makes the country less safe.”

At the time, more than 60 leaders in national defense urged Congress – again — to reform the way it oversees homeland security. They said the current system jeopardizes national security and leaves the nation vulnerable to cyber attacks, bioterrorism and other threats.

But even then, getting the 114th Congress – or any Congress, for that matter — to muster the will to whittle down the plethora of needless committees that currently oversee DHS is easier said than done. Congress hasn’t seen fit to reform its oversight of DHS for more than a decade, largely because of committee turf battles, the powers of the committee’s chairmen and their control of so many of the department’s purse strings. Everyone, it seems, believe they deserve a piece of the pie.

For a reorganization to succeed, the current Congress would have to begin working on reform immediately, but given the current congressional climate, movement on this front seems like a pipe dream, despite the fact that the need for simpler oversight was one of the priority recommendations of the 9/11 Commission,” as Lieberman and Ridge reiterated in their letter to Sessions this week.

The result: fragmented congressional oversight of DHS that “leaves our nation more vulnerable than it might otherwise be to the threat of cyber, biological and chemical attack,” said the Sunnylands-Aspen Task Force, a group of homeland security experts convened by the Annenberg Retreat at Sunnylands and the Aspen Institute Justice and Society Program in partnership with the Annenberg Public Policy Center of the University of Pennsylvania.

The original 9/11 Commission’s top recommendation was adamant: “Congress should create a single, principal point of oversight and review for homeland security,” a point underscored by the Sunnylands-Aspen Task Force. The group emphasized that the 119 congressional committees, subcommittees and other groups that claim jurisdiction over DHS has resulted in a "tangle of overlapping committees" that breeds  political confusion.

The bipartisan group reflected the overwhelming consensus that the system is dysfunctional. "The nation is not as safe as it could and should be," it stated. It’s a long repeated warning that’s’ fallen on deaf ears in Congress. The 61 signatories included the three past secretaries of homeland security; all the members of the 9/11 Commission; former heads of the FBI, CIA, National Security Agency; Joint Chiefs of Staff; former members of Congress and former homeland security advisors to presidents.

The Department of Defense, with a budget 10 times the size of DHS, only has to report to one-third the number of committees and subcommittees DHS has to contend with. In recent years, DHS officials and staff have been summoned to testify at dozens of congressional hearings hundreds of times, expending hundreds of work-years at a cost tens of millions to prepare testimony and reports. The more time DHS officials spend on the Hill means less time they have to securing the homeland.

The Heritage Foundation’s Riley Walters noted that, “Excessive oversight only hinders DHS’s abilities, but meaningful reform would allow DHS officials the freedom of making our daily lives more secure. And it would allow members of Congress to stop fighting useless turf wars.”

The conclave of original 9/11 Commission members declared in 2014 that they’d urged in 2004 that, “Through not more than one authorizing committee and one appropriating subcommittee in each house, Congress should be able to ask the Secretary of Homeland Security whether he or she has the resources to provide reasonable security against major terrorist acts within the United States and to hold the Secretary accountable for the department’s performance.”

But, “Regrettably, the Department of Homeland Security is still being simultaneously overseen by an unwieldy hodgepodge of committees,” they concluded.

9/11 Commission co-chairs Thomas Kean and Lee Hamilton stated in an op-ed that, “This patchwork system of supervision results in near-paralysis and a lack of real accountability.”

Indeed. Authorities – including every DHS secretary — have known for years that this muddle-headed approach has resulted in key security issues failing to be properly overseen by Congress.

“Every former Secretary of Homeland Security as well as current high-level DHS officials report — as they have for a decade — that this fragmented oversight is a significant impediment to the department’s successful development,” the former commission members said.

The former 9/11 commissioners added that, “This Balkanized system of oversight detracts from the department’s mission and has made Americans less safe. It is long past time for Congress to oversee the department as a cohesive organization rather than a collection of disparate parts. Only a committee with responsibility for all DHS components will be able to provide the department with useful strategic guidance. Reducing jurisdictional overlap will also enable Congress to finally begin enacting regular authorizing legislation to guide DHS.”

The former commission members had earlier stated, “We reiterate what we said in the 9/11 Commission Report: Congress should oversee and legislate for DHS through one primary authorizing committee. The Department of Homeland Security should receive the same streamlined oversight as the Department of Defense. At the very minimum … Congress should sharply reduce the number of committees and subcommittees with some jurisdiction over the department.”