Since the development of the atomic bomb, the United States has led the world in investments in research and development (R&D). We have issued more patents, developed more technologies, and broken more barriers than any other country. The development of stealth technology, the rise of driverless cars, the world-encompassing reach of the internet have all been led by the United States. All these efforts have been seeded, in one way or another, through government funding in research and development.

Reviewing the budget data gathered by the American Association for the Advancement of Science[1], the U.S.’ total investments in R&D have been on a general upward trend over the last 40 years, with some unsurprising bumps in the road with the most significant decrease coming in the years after the Great Recession.

Even though R&D investments had again begun to move upward by 2012, it appears that this may be a short-lived increase. The FY 2019 president’s budget request that was released this month had decreases in almost all areas of federal R&D. The original budget issued prior to the congressional compromise that lifted the spending caps cut the R&D budgets of Health and Human Services by 27 percent, Department of Energy by 25 percent, National Science Foundation by 31 percent and Department of Homeland Security by 18 percent. While many of the details about how the additional funds provided by the Hill will be distributed remain undecided, it is likely that most non-defense-related R&D activities will simply have the proposed cuts restored and remain flatlined. The two most prominent exceptions to this are ARPA-E, which the administration is still requesting to eliminate by cutting over $300 million, and DHS’s S&T R&D funding, which drops from $427 million funded by CR in 2018 to a proposed $290 million in 2019. 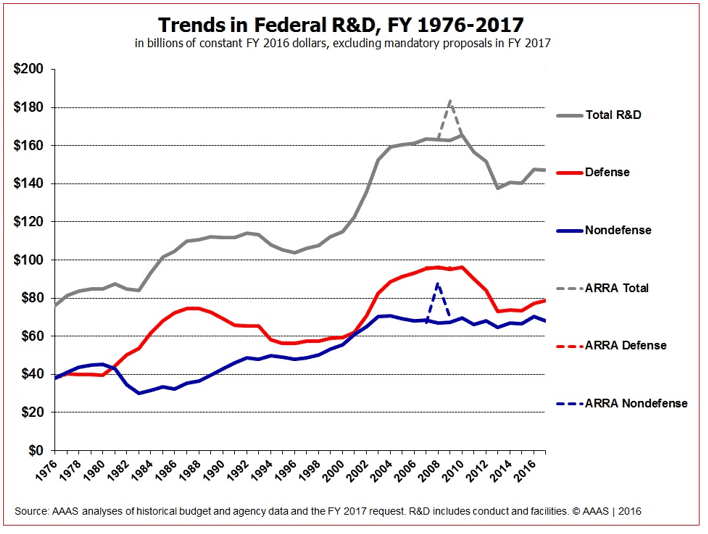 These cuts should be reconsidered as these agencies can provide critical seed funding for endeavors that can be deemed too risky or too specialized for private sector investment. In 2010, DOE provided a $465 million loan to Tesla helping enable the broad adoption of all-electric vehicles. Tesla used this experience, manufacturing capabilities and ARPA-E enabled advances in battery and power management technologies to build and deploy commercially viable grid-scale battery systems, which are an essential element to enabling the broad deployment of renewable energy systems such as solar and wind generation.

DHS S&T has provided critical funding for capabilities for both the operational components of DHS and states and localities. S&T funding has helped provide Immigration and Customs Enforcement with advanced data analytics for their national security missions; situational awareness tools for the borders and maritime environments; advances in real-time biometric technologies and models helping optimize how those technologies can be deployed in airport and port of entry environments; and developed and deployed an innovative cost-effective solution to help protect underwater transportation tunnels from catastrophic collapse and flooding after an explosive attack. While none of these achievements can claim the impact of some of the most visible successes that have come out of defense R&D agencies, they do provide ongoing incremental impacts and compare favorably when you consider that a single defense agency, DARPA, has a budget that is nearly an order of magnitude larger than that of the entire R&D budget of the Department of Homeland Security. Additionally, in the FY 2019 budget the R&D budget for DoD receives significant proposed increases, rising over $13 billion – an 18.2 percent increase over the FY2018 request.

While the increases in DoD R&D will undoubtedly provide advances and technologies that benefit homeland security missions, the lack of investment dedicated to the unique mission space that DHS occupies forces our first responders, operational components, and critical infrastructure to rely on trickle-down technologies. As a former DARPA program manager and HSARPA director, I understand some of the unique challenges to developing new capabilities for the homeland security enterprise and why, in many instances, DoD programs aren’t a good fit for DHS. DHS can, and should, leverage the capabilities being developed by DoD by formalizing partnerships with DoD defense agencies like DARPA to become a transition pathway, co-funding pilot programs to rapidly deploy new technologies that have dual-use capabilities for military and civilian applications (especially in maritime environments such as the Gulf of Mexico), and leveraging DoD Air Domain Awareness technologies and capabilities. At the same time, all of these partnerships require a robust applied research budget focused on the homeland space that can translate and transition these technologies and capabilities to full operational use in the civilian space.

I welcome robust R&D budgets for defense applications. In many ways DoD has been the catalyst for some of our greatest technological achievements. But these advances should not come at the cost of new technologies that make our electric grid more resilient, or rapidly restore communications and assess damage after natural disasters, or new technologies that provide better deterrence, detection, assessment and interdiction capabilities on our nation’s borders. For our nation to remain on the cutting edge of technologies and a leader on the world stage, we must continue to fund R&D not just in the defense sector but also across all sectors of our economy and government.

The views expressed here are the writer’s and are not necessarily endorsed by Homeland Security Today, which welcomes a broad range of viewpoints in support of securing our homeland. To submit a piece for consideration, email HSTodayMag@GTSCoalition.com. Our editorial guidelines can be found here.

Paul Benda
Paul Benda is the Senior Vice President, Risk and Cybersecurity Policy at the American Bankers Association. Mr. Benda utilizes his background as the former Director of the Homeland Security Advanced Research Projects Agency (HSARPA) where he was the head of Research and Development (R&D) for the Department of Homeland Security (DHS) and as a Program Manager at the Defense Advanced Research Projects Agency (DARPA) to support clients in expanding their work with the Federal Government’s R&D enterprise and to help them position technologies for transition in the Government’s Homeland Security to commercial markets. He has helped clients develop strategic approaches for commercial and government opportunities as well as tactical assistance with proposals that has enabled clients to increase their capture efficiency and revenue generation. Mr. Benda also leads the SAFETY Act practice at GSIS. He has successfully helped clients gain approval of SAFETY Act applications by leveraging his security and R&D experience as the former DHS decision authority on SAFETY Act applications. During his tenure at DHS, he approved nearly half of all current SAFETY Act awards, including those for the New York Yankees, Willis Tower and New York Stock Exchange. His experience also includes serving as the Acting Deputy Under Secretary and Chief of Staff of S&T, as well positions in the Department of Defense where he worked at the Pentagon Force Protection Agency and oversaw the design, implementation, testing, and commissioning of all security systems at the Pentagon Reservation. Mr. Benda started his career as an Active Duty U.S. Air Force officer at the Air Force Research Laboratory in Rome, NY and transitioned from military life to the private sector as a consultant for Booz Allen for five years before returning to government service.