Another shutdown was averted last week with Congress and President Trump agreeing to a bipartisan government funding deal. The new deal included nearly $1.4 billion in homeland security appropriations for 55 miles of bollard fencing in the Rio Grande Valley “with limitations to address community and environmental concerns.” While this deal isn’t ideal for either side, it brings relief to thousands of federal workers who suffered from the earlier government shutdown, according to a survey from Clever Real Estate.

There’s still the specter of how Trump’s national emergency declaration will affect government jobs, but for most federal workers, it’s back to business as usual. How were they affected by the longest shutdown in history, however? During the five-week long shutdown, $9 billion in compensation went unpaid to federal workers. The direct financial impact was both immediate and permanent, affecting people’s livelihoods, savings, and living situations.

How the Shutdown Impacted Government Workers

Clever Real Estate surveyed 500 federal workers for the survey, with 57 percent saying they were negatively impacted by the shutdown. Many government employees and contractors employed for homeland security purposes were required to continue working, even though they weren’t receiving pay. Twenty-three percent of those surveyed indicated they needed to borrow money or dig into their savings accounts after just one or two weeks without pay, underscoring that many federal workers live paycheck-to-paycheck.

Approximately one-third of federal workers also sought supplemental income during the shutdown, either through freelancing opportunities or gig economy work, like driving for rideshare companies Uber or Lyft. 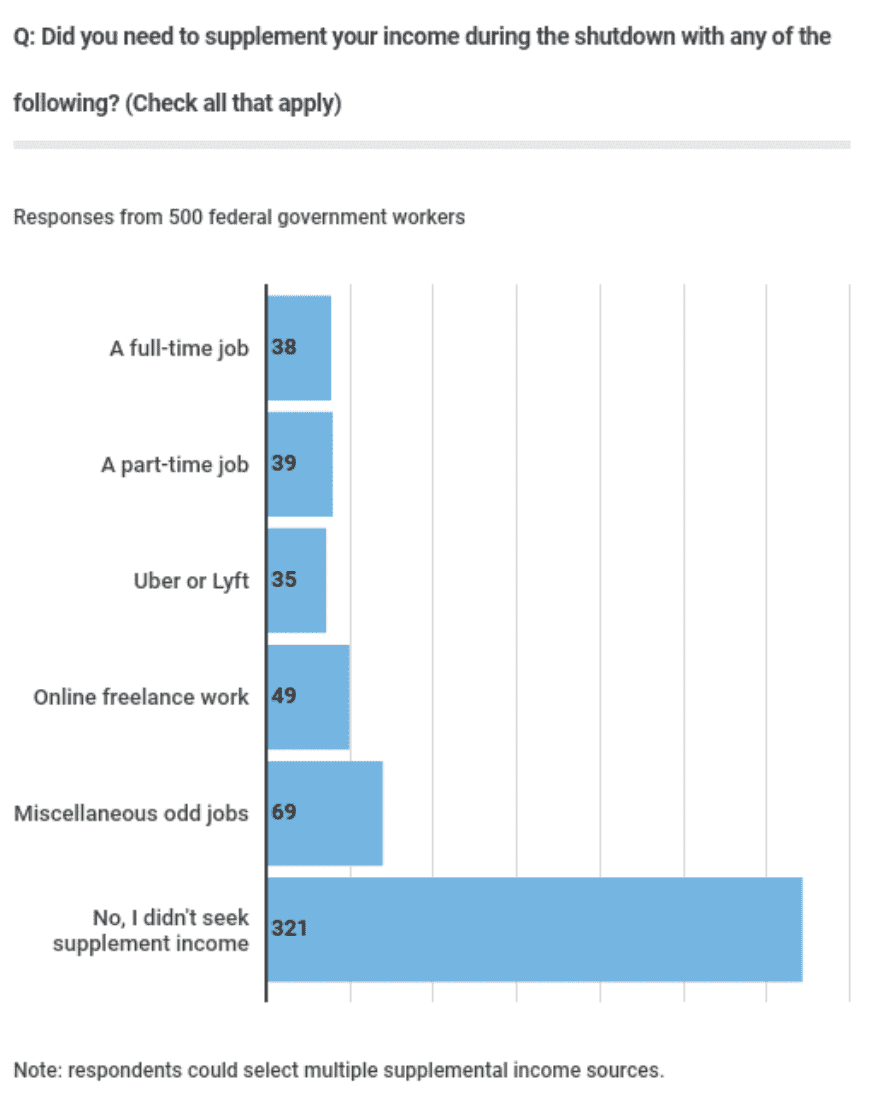 Despite a high median salary of $77,000, 20 percent of federal workers earn less than $50,000 per year, with many having less than a month of savings in the bank. Although federal workers have greater job security than many in the private sector, there are downsides.

The Ripple Effect of the Shutdown

Though the government shutdown had immediate effects on government services, including shutting down key FDA inspections and closing national parks, there were more long-reaching consequences on the lives of federal workers.

More than one-third of survey respondents expressed that the shutdown affected their ability to save for a major life purchase or event, such as a wedding, retirement, or purchasing a new home. The most common purchases put on pause were buying a new car or home (38 percent each), while other federal workers couldn’t pay for college tuition for themselves or family (23 percent).

Perhaps the most impactful consequence of the shutdown was that 16 percent of federal workers missed a mortgage or rent payment due to the shutdown. While many banks and landlords offered financial assistance for federal workers, missing payments could put a negative mark on their credit history, affecting their ability to qualify for credit cards, loans, and other financial products in the future. 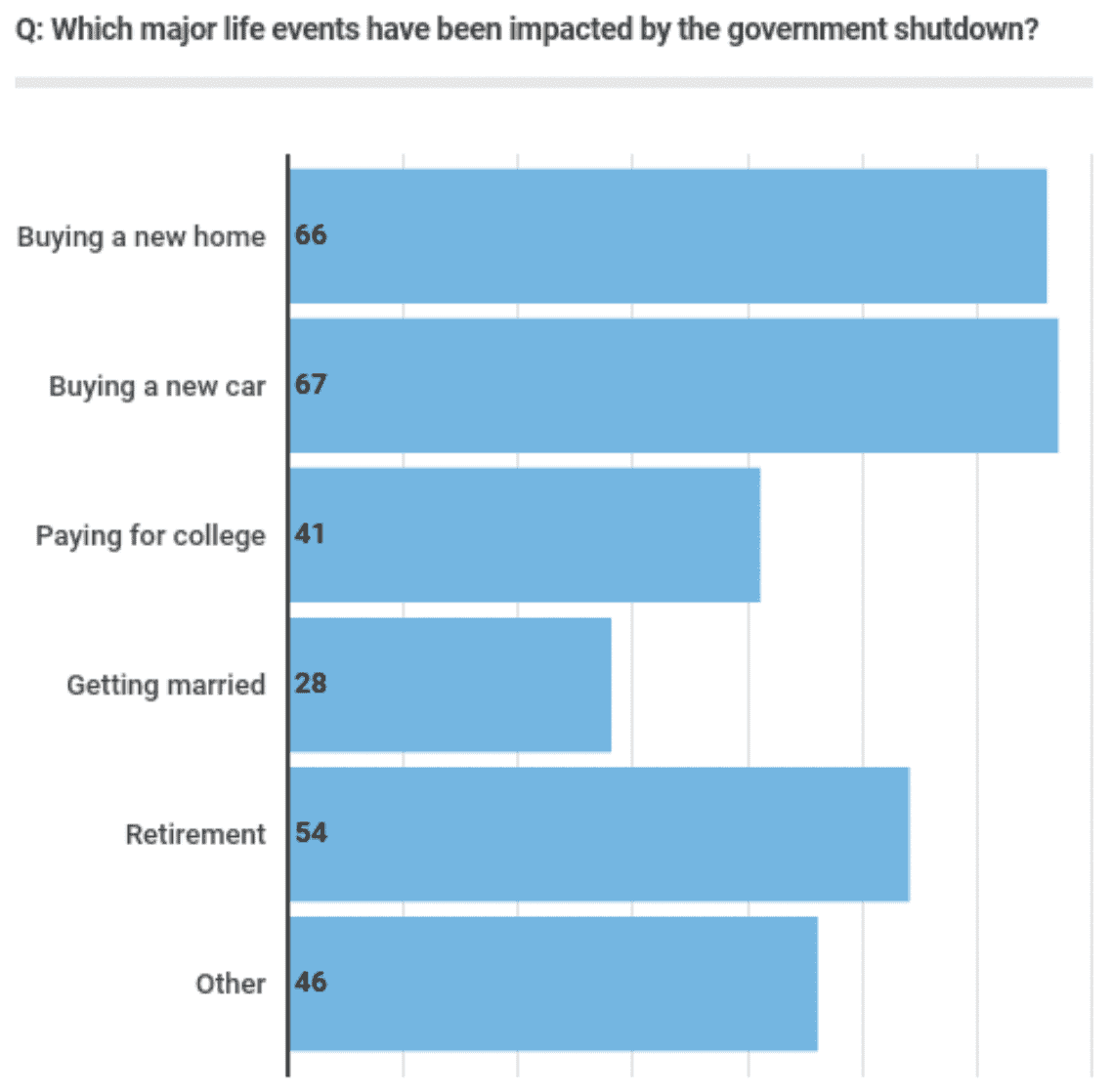 The Political Affiliation and Allegiance of Government Workers

There are certainly sharp tensions in the federal government right now between Democrats and Republicans. Among federal workers, there were stark differences among them regarding whom they blamed for the shutdown, especially depending on party affiliation.

In Clever’s study, 41 percent of respondents self-identified as Democrats, while 30 percent claimed Republican Party loyalty; a further 29 percent were registered with another party or none at all. Sticking to party lines, 90 percent of Democrats surveyed blamed the president for the shutdown, compared to 9 percent of Republicans.

The tension during the shutdown centered around homeland security, specifically President Trump’s border wall. While the new package in the appropriations bill provides some money for border security, Trump is pressing forward with his plans to build his signature campaign promise through a national emergency that pulls funds from other budgets including military construction.

Federal workers, overall, were not supportive of a border wall prior to the shutdown, with 63 percent opposing the plan. However, the 37 percent who supported the wall before the shutdown mostly held their opinion, with only 5 percent of those changing their stance.

While the shutdown is now over and a second shutdown has been avoided for the time being, the effects of the five-week-long closure will be felt by individual government workers and federal agencies for months. In the end, Republicans and Democrats agreed to a compromise that provides provisions for enhanced border security. Hopefully for government workers, more agreements like this can be reached in the future.

Ben Mizes
Ben Mizes is the Co-Founder and CEO of Clever Real Estate, a free online service that connects home buyers and sellers with real estate agents. Ben is also an active real estate investor with 22 units in St. Louis and a licensed real estate agent in the State of Missouri.