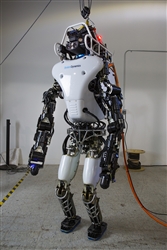 This summer, the Defense Advanced Research Projects Agency (DARPA), the research arm of the Pentagon, is hosting a challenge that seeks to address the limitations of the human response to natural and man-made disasters by promoting innovation in human-supervised robotic technology for disaster-response operations.

Twenty-five human-robot teams from seven countries will compete for $3.5 million in prizes June 5-6 during DARPA’s robotics finals in California. Competitors in the DARPA Robotics Challenge (DRC) are developing robots that can operate in harsh, unpredictable disaster environments that pose a grave risk to the health and wellbeing of rescue and aid workers.

“The diverse participation indicates not only a general interest in robotics, but also the priority many governments are placing on furthering robotic technology,” said Gill Pratt, program manager for the DRC, in a statement. “As this technology becomes increasingly global, cooperating with the United States in areas where there is mutual concern, such as disaster response and homeland security, stands to benefit every country involved.”

DARPA intends to use the DRC to take robots from the controlled setting of research labs and introduce them to a real-world environment. To demonstrate the competence of robots in environments they have not previously encountered, the new teams had to submit videos showing successful completion of several tasks.

The tasks the robots participating in the challenge had to demonstrate included: engaging an emergency shut-off switch; getting up from a prone position; locomoting ten meters without falling; passing over a barrier; and rotating a circular valve 360 degrees.

“We’re looking forward to seeing how the teams ensure the robustness of their robots against falls, strategicallymanage battery power, and build enough partial autonomy into the robots to complete the challenge tasks despite DARPA deliberately degrading the communication links between robots and operators,” Pratt said.

The DRC finals are the culmination of a competition that began in June 2013 in which the robotic software teams were tested on their ability to guide a simulated robot through a number tasks. The six winning software teams earned funding and DARPA provided them with a robot called Atlas, produced by Boston Dynamics.

“There will be roughly 15 different commercial and custom physical robot forms demonstrated at the DRC Finals,” Pratt said. “Although seven teams will use the upgraded Atlas robot from Boston Dynamics, it’s each team’s unique software, user interface, and strategy that will distinguish them and push the technology forward.”

Then, at the DRC Trials held in December 2013, 16 teams guided their robots through eight tasks that robots might have to do to safely enter and effectively work inside a disaster zone. While the robots will need to be told which tasks to perform by their human operators, DARPA hopes that by the time of the DRC finals the robots will be able to demonstrate the competence of a young child with the ability to autonomously carry out simple commands, such as “close the valve” or “clear the debris in front of you.”

The ability to carry out these tasks will demonstrate that robots are not only the stuff of science fiction, but may one day play a crucial role in mitigating and recovering from the effects of future disasters, especially in in situations in which humans cannot safely operate.

DARPA will also be sponsoring the Robots4Us contest, which asks US high school to create 2-3 minute videos describing the role they see robots playing in the future. DARPA will select up to 5 individual winners to win a trip to the DRC Finals to attend in person and participate in a panel discussion before an audience of industry leaders, engineers, and media.