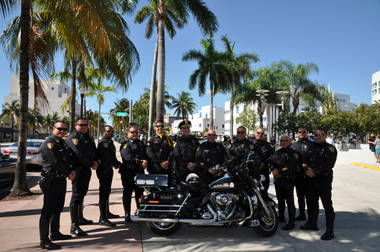 The Miami Beach Police Department (MBPD) depends almost entirely on two-way, hand-held radios for its communications. However, there’s been a problem: the OEM batteries that power their Motorola XTS 3000/5000radios couldn’t hold a charge longer than 8 hours, even when new.

This problem was compounded because the Invitation to Qualify (ITQ) purchase procedure tended to force the department to have to purchase from the vendor with the lowest bid, whether or not the product is superior.

According to MBPD, their radios’ batteries would drastically deteriorate just as the 1-year warranty expired, requiring its officers to “literally … be trained when to immediately recharge or replace upon hearing the ‘chirp’ warning … yet, as theOEM batteries aged, they gave almost no notice before dying, leaving officers without communications until they could get to a back-up battery.

Ironically, the department noted, the OEM blamed its customer for creating bad memory and shortening the life of its battery.

Consequently, MBPD drafted a highly specific ITQ that required every vendor to provide two batteries and one charger for evaluation. The batteries were then disseminated to different areas of the department, including car, motorcycle, K-9, ATV, Marine Patrol and SWAT, where they were tested in the field for length of transmitting time and stand-by mode, as well as recharge duration.

In the meantime, their radio systems tech ran each battery through a series of tests for fit and function (both in the radio and on the officer), connection contact, durability, heat resistance, UL rating, charger agnostics, fit in duty belt holsters — virtually tearing the batteries to pieces in the process.

The department found that at every stage of evaluation that Impact Power Technologies (IPT) “was the clear and uncontested leader,” IPT said in a statement.

“It became painfully clear that it was time for a change, but getting saddled with a less-than-superior replacement battery due to procurement restrictions was not an option,” IPT touted, saying, “Miami Beach PD Tech Lt. David Hernandez knew they needed a battery that would last longer than a typical 12-hour shift and was determined to find one.”

MBPD “discovered an unexpected advantage in that the IPT battery was considerably lighter than all others, which would help reduce lower back issues some officers experience when carrying lots of equipment on their duty belts,” the battery provider stated, adding that the department’s “batteries safely charged on OEM or tri-chemistry chargers just-in-case personnel mixed them up.”

“It started with a trade show brochure from Impact Power Technologies, whose claims sounded too good to be true,” Hernandez said. “But when the complimentary battery that IPT supplied tested out at 12 to 18 hours of run time every time, it was a game changer.”

“IPT’s battery performance was like night and day over the OEM or any other battery we tested [and] was easy to justify spending a few more dollars to replace the OEM with IPT, especially when we’re getting between double and triple the lifespan in return value,” Hernandez said in a statement.

IPT said, “MBPD was able to make an initial purchase of approximately 100 IPT batteries,” which “was a little over two years ago and the IPT batteries are still running strong. Since then, Miami Beach PD has continued to deploy new IPT batteries in phases as part of their annual replacement budget.  With the next purchase by the end of October, they will be almost fully equipped—except now they have another decision to make.”

“We just tested the newest IPT battery for the Motorola XTS 3000/5000 radios that has 4700 milliamps and it’s lasting quite a bit longer…over 30 hours on a charge,” Hernandez said, adding, “I didn’t think we could afford the upgrade, but IPT promised to hold the same price as their previous battery.”

“IPT continually works to better our products, which means safer personnel and communities. We don’t believe in up-charging our customers for increased capacity so, though it may cost us a bit more, it won’t cost them more,” IPT COO Ken Murphy said.