Clothing line Nine Line Apparel found out the hard way when it tried to run a pro-flag, pro-Constitution, pro-standing-during-the-anthem ad during the game Sunday.

Founded by CPT Tyler Merritt, a member of the Army’s elite 160th Special Operations Aviation Regiment, Nine Line’s website describes itself as “Relentlessly Patriotic Since 2012” and sells apparel, tactical gear, and other items to express patriotism. In combat, a Nine Line is an emergency medevac request, and is often the difference between life and death for the most severely wounded soldiers.

The ad, a 45-second tribute to those who answer the call to defend the nation and the Constitution, encourages soldiers, law enforcement, first responders and others to stand strong: “Don’t ask if your loyalty is crazy – ask if your loyalty is crazy enough… some people think you’re crazy, staying loyal, defending the Constitution, standing for the flag…” and ends with the founder proclaiming that all those who kneel, and protest, can do so because he and others are “crazy enough.”

The Nine Line ad directly takes on a Nike ad that featured then-49ers football player Colin Kaepernick, who started a movement to kneel during the national anthem to bring attention to racial injustice.

According to the Washington Examiner, “CBS’s purported reason for rejecting a Super Bowl commercial that extols patriotism is totally out of bounds,” Nine Line Apparel CEO Tyler Merritt said. “Let’s call this what it is: a blatant attempt to censor a message that their politically correct executives find offensive.” CBS rejected the ad because they didn’t think the $25 million firm could pay for it.

“We urge Americans who believe it’s important to show respect for our flag and national anthem to join us in calling out this offensive bias. It’s time to give a penalty flag to CBS.” 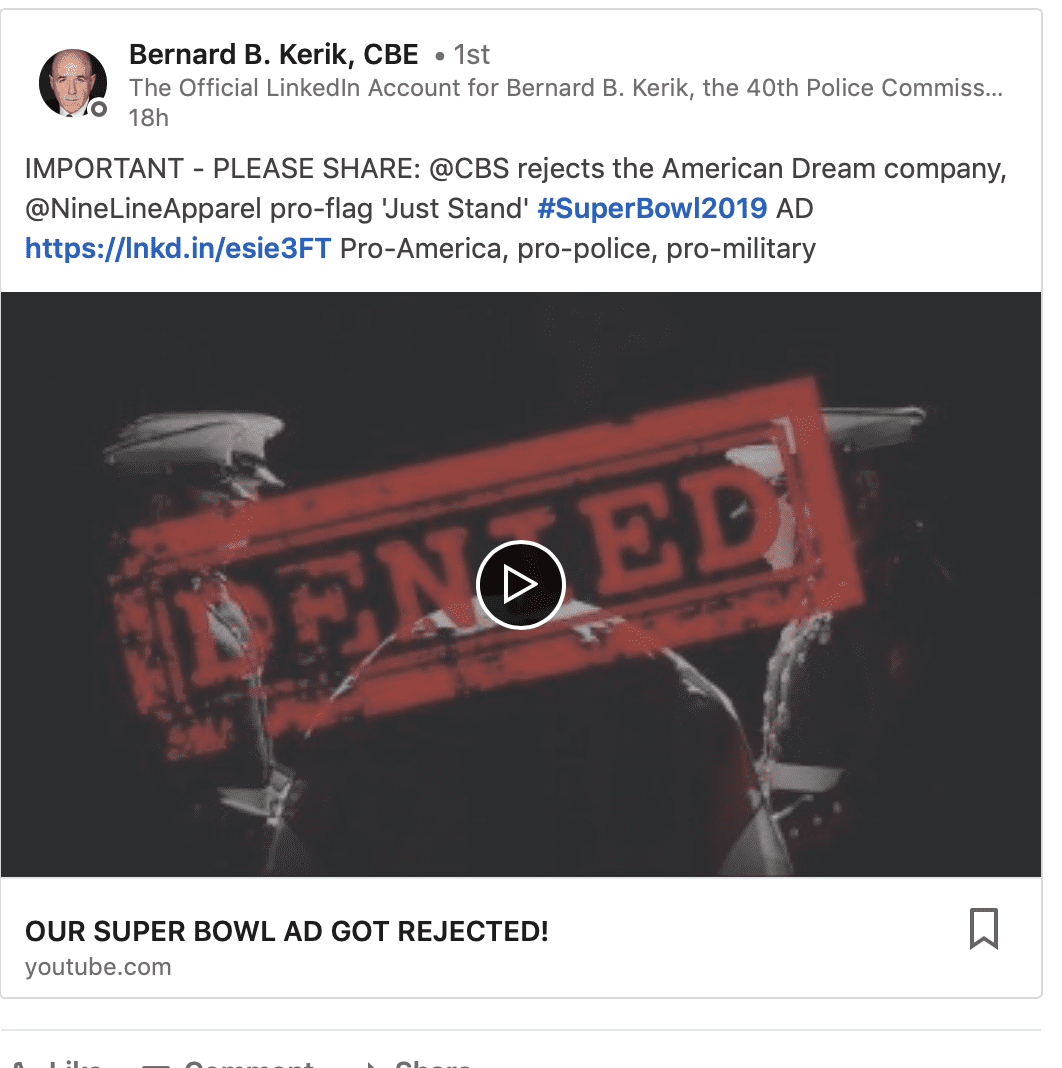 According to its website, the mission of Nine Line Apparel was to create a high quality clothing brand to be enjoyed by patriotic Americans around the globe. As the brand grew, Merritt saw the need to give back to the community. He continued to serve as an active-duty Army officer, and founded Nine Line Foundation.

In 2012,  Tyler’s West Point classmate, CPT Edward “Flip” Klein, lost three limbs fighting in Afghanistan. Flip’s injury was the impetus for Tyler to create the foundation. Knowing that he could not just give Flip money out of his own pocket, he found the logical solution – create the nonprofit foundation, so that he could help Flip and so many others like Flip, by greatly improving the quality of life in the “new normal.” Since its inception, the foundation has helped numerous severely wounded warriors and is currently constructing a transitional community for homeless veterans, a Veterans Village, which will provide training and housing to our veterans in most desperate need.