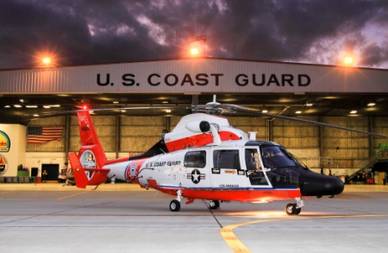 The US Coast Guard (USCG) announced that it’s searching for a new base of operations for helicopter crews serving the greater Los Angeles area. The current facility, which has been located in leased hangars and support buildings at Los Angeles International Airport since 1962, will no longer be available as of September 2016 due to airport expansion, USCG said.

“Planning for a new air station has been underway for some time,” the Coast Guard said, “but a location has not been chosen. Once a site is selected construction and outfitting of a new facility is expected to take several years. In the interim, Coast Guard air crews and helicopters will operate from what is known as a Forward Operating Base located at Naval Base Ventura County Point Mugu in Oxnard.”

“We appreciate the assistance and support of the US Navy in establishing a Forward Operating Base to serve the region,” said Capt. Michael Eagle, chief of response operations for the 11th Coast Guard District. “The men and women of the Coast Guard will continue to provide outstanding service and protection to the maritime community and people of Southern California.”

“There will be no interruption of search and rescue, law enforcement and security coverage as we wrap up over a half-century of flying missions from Los Angeles International Airport (LAX). I am confident our crews will uphold the Coast Guard’s long tradition of bravery, dedication, and public service,” Eagle said.

In addition to the MH-65D Dolphin helicopters based in the Los Angeles, San Francisco and Humboldt Bay areas, the Coast Guard operates MH-60T “Jayhawk” helicopters out of San Diego, and long range HC-130 “Hercules” fixed-wing aircraft from Sacramento to provide air coverage of the California coastal area.