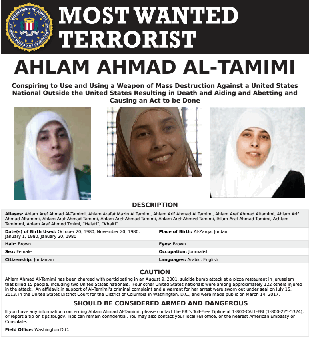 Since the criminal complaint was unsealed last week for a warrant for the arrest of Ahlam Aref Ahmad Al Tamimi, also known as “Khalti” and “Halati,” a Jordanian national in her mid-30s, charging her with conspiring in the suicide bombing outside the Sbarro pizzeria in Jerusalem August 9, 2001 that killed 15 people — including two US nationals and wounding four other Americans among the approximately 122 others injured in the attack — she’s happily been tweeting away, according to the Middle East Media Research Institute( MEMRI), which closely monitors jihadi social media.

Meanwhile, the FBI also designated her as a “Most Wanted Terrorist.”

The criminal charge against Al Tamimi had been under seal since July 15, 2013.

According to MEMRI, almost as soon as the FBI made its announcement, she told a interviewer, “Everybody Was Congratulating One Another … Everyone Was Happy … I Would Do It Again Today.”

Acting Assistant US Attorney General for National Security Mary B. McCord isn’t one of her admirers. She said Al Tamimi “is an unrepentant terrorist who admitted to her role in a deadly terrorist bombing that injured and killed numerous innocent victims. Two Americans were killed and four injured. The [unsealed] charges … serve as a reminder that when terrorists target Americans anywhere in the world, we will never forget – and we will continue to seek to ensure that they are held accountable … I want to thank the many dedicated agents and prosecutors who have worked on this investigation.”

“Al Tamimi is a terrorist who participated in an attack that killed United States citizens. The bombing that she planned and assisted in carrying out on innocent people, including children, furthered the mission of a designated terrorist organization,” said Assistant Director in Charge Andrew Vale of the FBI’s Washington Field Office. “The FBI continues to work with our international partners to combat terrorists like Al Tamimi and hold them accountable.”

US Attorney Channing D. Phillips for the District of Columbia added, “We have never forgotten the American and non-American victims of this awful terrorist attack. We will continue to remain vigilant until Ahlam Aref Ahmad Al Tamimi is brought to justice.”

According to the affidavit in support of the criminal complaint and arrest warrant, Al Tamimi was living in the West Bank in the summer of 2001 while attending school and working as a journalist for a television station. She agreed that summer to carry out attacks on behalf of the military wing of Hamas (the Izz Al Din Al Qassam Brigades), a Palestinian organization designated by the US as a Foreign Terrorist Organization on October 8, 1997.

Hamas was established in 1987 at the onset of the first Palestinian uprising, or Intifada, as an outgrowth of the Palestinian branch of the Muslim Brotherhood. The armed element, the Izz Al Din Al Qassam Brigades, has conducted anti-Israeli attacks, including suicide bombings against civilian targets inside Israel.

According to the affidavit, the suicide bomber entered the pizza restaurant and detonated the explosive device.

Al Tamimi pleaded guilty in an Israeli court in 2003 to multiple counts of murder arising from the suicide bombing and was sentenced to 16 life terms in prison. However, the affidavit stated, served served only eight years before being released on or about October 28, 2011, as part of a prisoner exchange between Israel and Hamas.

The FBI said, “Al Tamimi was returned to Jordan upon her release from incarceration. Jordan’s courts, however, have ruled that their constitution forbids the extradition of Jordanian nationals. The US has worked and will continue to work with its foreign partners to obtain custody of Al Tamimi so she can be held accountable for her role in the terrorist bombing.” The FBI also announced she’d been placed on its list of Most Wanted Terrorists.

MEMRI said, “Her tweets have included videos and photos of the scene at the 2001 Jerusalem bombing that she facilitated, including one marking the 14th anniversary of the attack and praising the bomber; a model of a bombed-out Israeli bus against a mural of Jerusalem featuring Al Aqsa; promotion of her program, ‘Breeze of the Free Men,’ on the Al Quds satellite channel; and images, photos and poems on Palestinian topics, including photos of Yasser Arafat, Hamas bombmaker Yahyah Ayyash, aka ‘The Engineer,’ Hamas cofounder and spiritual leader Sheikh Ahmad Yassin, Hamas cofounder Abd Al Aziz Al Rantisi and imprisoned Hamas commander Abdallah Al Barghouthi.”

On March 16, she wrote: "Clarification released by Al Tamimi’s family. Please share widely. Thank you for your cooperation." MEMRI said, “The document included was in response to media reports stating that Jordan has refused to extradite her to the US to stand trial. The family, it said, noted that no final decision had yet been made been made, and that they trust that the Court of Cassation will confirm the court of appeal’s decision.”

“Just prior to the above tweet,” MEMRI noted, “Al Tamimi retweeted a video segment from Al Jazeera about the 2001 bombing she had helped carry out. She also retweeted an opinion poll by Al Jazeera asking about the most influential person of the week. The choices included, in addition to Al Tamimi herself, former Egyptian president Hosni Mubarak, Dutch rightwing politician Geert Wilders and Venezuelan terrorist Ilyich Ramírez Sánchez, aka Carlos the Jackal.”

Tweeting jihad seems to be her calling. On April 28, 2016, she tweeted a photo of a model of a bombed-out Israeli bus on display against the backdrop of a mural of Jerusalem, featuring Al Aqsa, with a sign held up that read, "Greetings to You, Oh Gaza the peace."

On April 15, 2016, Al Tamimi tweeted a map of Palestine composed of photos of prominent Palestinians, including Yasser Arafat, Abd Al Aziz Al Rantisi, Usama bin Laden mentor Abdallah Azzam and Sheikh Ahmad Yassin, with a poem that read, "Palestine unites us/ Hugs us/ Gathers us/ Embraces us/ Be angry with us/ Forgive us/ She is our mother."

On March 29, 2016, she tweeted a photo of a cup of coffee and a pamphlet the cover of which featured photos of Yahyah Ayyash, Hamas commander Abdallah Al Barghouthi, Sheikh Ahmad Yassin, and a scene of a bombing, with the text: "Mornings are different with the literature of the prisons."