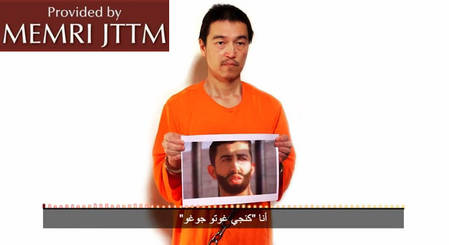 In a 1:50 minute audio message ISIS released Tuesday, Kenji Goto Jogo, the remaining Japanese national held by the jihadi organization, Jogo appealed for the second time for his release.

Homeland Security Today reported Saturday that a new 2:52-minute video allegedly released Saturday by the Islamic State (ISIS) hours after the expiration of the 72-hour ultimatum ISIS had given the Japanese government to pay a $200 million ransom for two Japanese hostages or they would be beheaded, apparently shows one of the captiveswas indeed beheaded.

The latest audio “also appears to potentially be Jogo’s last message, saying that ISIS will execute him if the Jordanian government doesn’t release imprisoned female [jihadist] Sajida Al Rishawi within 24 hours,” the Middle East Media Research Institute (MEMRI) speculated. “Jogo notes as well that if Al Rishawi is not released, ISIS will execute a Jordanian pilot it has in its custody.”

Jogo’s message includes a still photo of himself holding a picture believed to be the captured Jordanian pilot, Mu’adh Safi Yusuf Al Kasasibah.

MEMRI,which monitors Islamist jihadist social media, said “Jogo appeals to his wife Renko, and to the Japanese people and government. ‘I’ve been told [by ISIS] that this my last message,’ he says. He adds that he was informed that the only obstacle remaining for his release is the Jordanian government, which he says, he been ‘delaying the handover of Sajida [Al Rishawi].’ Jogo informs his wife and the Japanese people to ‘tell the Japanese government to put all their political pressure on Jordan,’ and that ‘time is now running very short!’”

Jogo reiterated that the prisoners exchange deal is simple. "It is me for her [Al Rishawi, [so] what seems to be so difficult to understand?” he said.

“Jogo also says that any delays by the Jordanian government will lead not only to his death, but to the killing of Al Kasasibah as well,” MEMRI reported. ‘Any more delays by the Jordanian government will mean [that] they are responsible for the death of their pilot, which then will be followed by mine,’” Jogo said, emphasizing the short window of time for his release.

"I only have 24 hours left to live, and the pilot has even less,” Jogo said in the message. “Please don’t leave us to die."

Jogo said "the ball is now in the Jordanian’s court."