It should come as no surprise that the National Capital Region (NCR) is a target for terrorists and other bad actors, being a nexus of government, military, and cultural entities. Since 2001, the region has been a hotbed of extremist activity and, as such, in 2018 Arlington County secured a Federal Emergency Management Agency grant award on behalf of Northern Virginia to identify and address gaps in response to complex coordinated terrorist attacks (CCTAs). The Northern Virginia (NoVA) High Threat Response Program (HTRP) engaged over 100 representatives from 21 agencies across NoVA to improve regional and multiagency collaboration. The project utilized subject matter experts to enhance existing capabilities, and create new integrated tactics and strategies to respond to CCTAs.

The HTRP identified five core components of CCTAs, to include:

CCTAs involve one or more of the identified core components, happening at one or multiple sites. Such incidents require a significant mobilization of resources and an integrated law enforcement – Fire/EMS response. Additionally, there are six areas identified as key in improving preparedness and response to CCTAs:

Representatives from the NoVA region identified gaps and created guidance and best practice documents, lesson plans, and training curriculums. The working groups also addressed first responder safety, including Personal Protective Equipment (PPE) and operating in hazardous conditions. These documents are compiled into a resource repository. The objective was to provide a single location that any emergency response agency, regardless of size, could go to find everything necessary to build their own high-threat program or related capability. Many jurisdictions in the country do not have the bandwidth and resources to conduct testing and research or to develop novel practices, which makes information sharing even more important.

The High Threat Response “one-stop-shop” website is a repository with hundreds of vetted resources that can aid police agencies, fire departments, hospitals, and other entities involved in public safety. Among the compiled guidance documents are after-action reports, policies and procedures, training resources, as well as reference documents, including scientific articles, reports by public safety partners, useful links to websites and videos, and other materials that address various issues in the high-threat arena. Many of the resources are public but a portion of the repository includes public safety sensitive content and is hosted on the Department of Homeland Security’s secured system for information sharing, the Homeland Security Information Network (HSIN) website. Users interested in accessing HSIN must be vetted by DHS and provide their credentials and agency affiliation. In addition to resources related to particular core components or key areas, the repository includes after-action reports, educational links, and the newly released High Threat Incidents Database (HTID).

The High Threat Incidents Database (HTID) is an inclusive resource that captures national and international high threat incidents. The database was developed by the HTRP and tracks incidents that are complex in nature and pose a challenge to first responders. What makes the HTID particularly valuable is that it includes incidents that may be omitted by databases with narrow definitions, such as incidents with no casualties or thwarted plans for violent acts, which can offer valuable lessons from investigative, threat assessment, and operational perspectives. Another distinctive feature of the database is the category “high threat aspects” that shows each incident’s relevance to the high-threat arena. In addition to tags assigned to the program’s five core components, some incidents indicate a mental health nexus, previously exhibited warning behaviors, the use of novel tactics, and other high-threat aspects. The HTID commonly excludes accidents and domestic/interpersonal conflict incidents with no danger to public safety, and no complications in response. The database uses open sources such as news articles, scientific articles, state and federal reports, after-action reports, public court documents and affidavits, manifestos, and social media. The database is continuously updated and modified as new sources of information become available or new incidents get reported. The HTID covers 2019 and 2020, but will be expanded in the future to include previous incidents, and more categories. 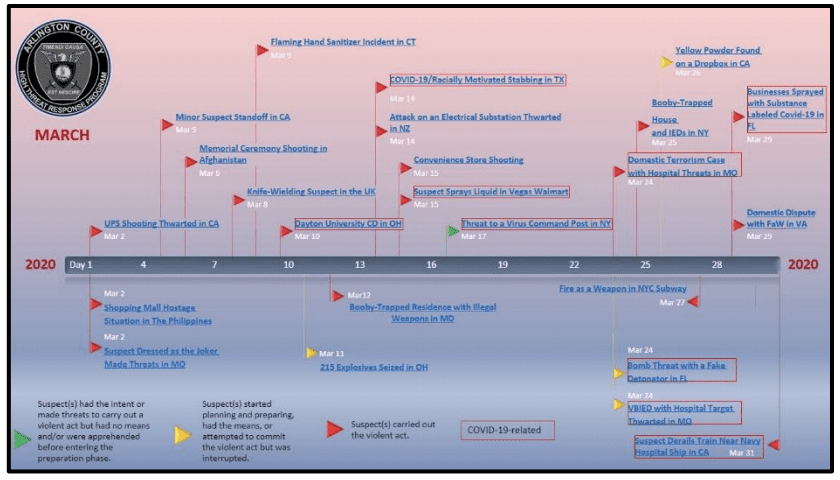 The High Threat Incidents Visual Timeline corresponds to the spreadsheet entries and offers a temporal visual representation of national and international high treat incidents. Everyone can access the HTID and Timeline, and users are encouraged to provide feedback and recommendations for improvement.

In honor of National Preparedness Month, it is important to discuss whole of community preparedness and response in relation to CCTAs. Since its inception, the HTRP has worked to create and maintain multiple partnerships in the region impacting various parts of the community. The HTRP also participates in the Arlington Public Schools Threat Assessment Team and School Safety Committee.

These programs empower all members of the community by providing education and guidance to civilians, and encourage the continuum of care in the whole region. The Hospital Response Task Force (HRTF) is a novel response plan integrating hospital staff, law enforcement officers, Emergency Medical Service (EMS) providers and other essential services immediately following a mass casualty incident (MCI). MCIs are events that often overwhelm a community’s network of emergency resources and result in many injuries or deaths, and sudden victim surges turn hospitals into secondary MCI scenes. 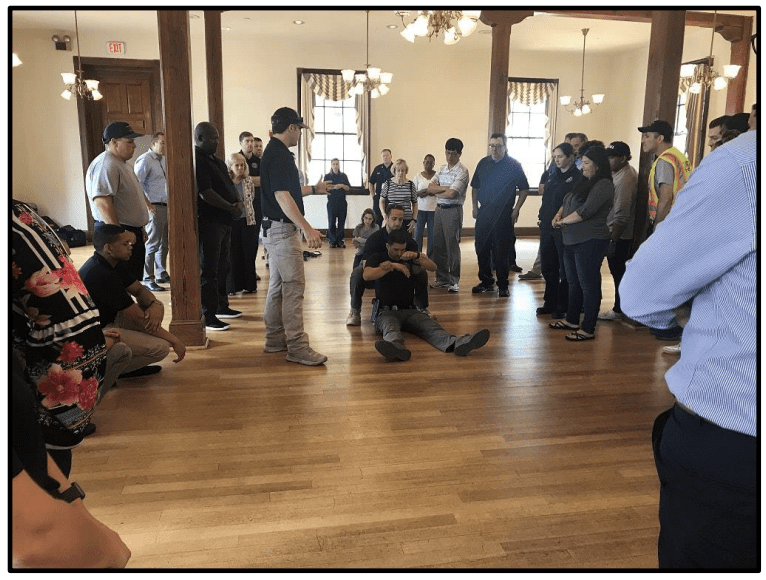 The Until Help Arrives training program provides citizens with the knowledge and skills necessary to help their communities save lives until professional responders arrive. Attendees learn how to recognize violent activities, respond safely, provide immediate rescue tactics to the injured, and report them to 9-1-1 efficiently. In addition, all participants are encouraged to take a Train-the-Trainer course and become certified to deliver the Until Help Arrives class in their own organization or jurisdiction.

The HTRP partnered with the University of Maryland National Consortium for the Study of Terrorism and Responses to Terrorism (START) to develop the Strengthening Interagency Capacity to Address Terrorist Threats curriculum. This course aims to build the intellectual and structural capacity to respond to changing threat environments as well as provide a forum for interagency and interdisciplinary collaboration to optimize responses to terrorist events. The HTRP also partnered with the Northern Virginia Emergency Response System (NVERS) to develop training videos assisting front liners’ awareness in hazardous conditions, such as during potential chemical, biological, or radiological events, or when improvised explosive devises (IEDs) are suspected or present.

The NoVA HTRP is a multidisciplinary, cross-jurisdictional initiative to research and evaluate past and current national and international practices in high-threat response and develop enhanced capabilities to address existing and novel threats. The HTRP comprehensive library and database are available to all public safety partners, providing resources and tools to enhance public safety capabilities. For more information on the program or to access some of the resources mentioned in this article, please visit www.novahtrp.com.

Eva Jernegan
Eva Jernegan is a research and intelligence analyst with the Arlington County (VA) High Threat Response Program and is the lead researcher of the High Threat Incidents Database (HTID) and the Fire as a Weapon Incidents Database (FWID). Eva participates in the Arlington County Public Schools Threat Assessment Team and contributed to the development of the K-12 School Shooting Database initiated by the Advanced Thinking in Homeland Security program. She was previously an investigative assistant at the Homicide/Robbery Unit of Arlington County Police Department and holds a Master’s degree in Forensic Psychology from George Washington University, where she was a graduate ambassador for international students.