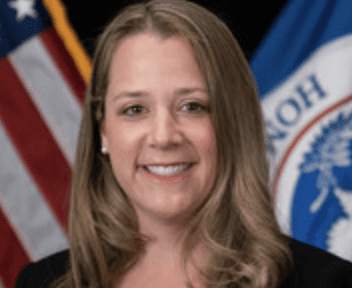 The Cybersecurity and Infrastructure Security Agency (CISA) has selected Kelly Murray to serve as the new Associate Director for Chemical Security. In this role, Murray will oversee the Chemical Facility Anti-Terrorism Standards (CFATS) program, proposed Ammonium Nitrate Security Program, and voluntary chemical security initiatives. Murray has been with CISA’s Chemical Security team since 2008, where she rose through the ranks, having served previously as a Section Chief and Branch Chief, and most recently as the Acting Deputy Associate Director for Chemical Security.

Murray brings a wealth of knowledge and experience in chemical security to the position. Over the last 13 years, she has been integral not only to developing and implementing the CFATS program, but also to growing the extensive stakeholder relationships across CISA’s critical infrastructure partners.

Murray earned a bachelor’s degree from Indiana University in mathematics with minors in Information Technology, Economics, and Spanish, and recently graduated from the Federal Executive Institute.