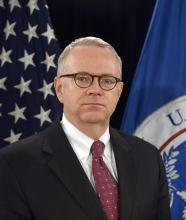 Brian de Vallance is recognized for providing innovative, impactful strategic advice at the highest levels of government and in the private and nonprofit sectors. He has deep, senior-level policy and oversight experience with issues relating to cybersecurity, homeland security, and both Federal and state and local law enforcement.

Brian’s earned his unique depth and breadth of experience at the three different levels of government (federal, state, and local) and in all three branches (legislative, executive, and judicial). Previously, he served on the senior staff of two governors; a mayor; a state supreme court chief justice; U.S. Attorney General Janet Reno, where he was the U.S. Department of Justice’s Director of Intergovernmental Affairs and its Federalism officer; and two secretaries of the U.S. Department of Homeland Security (DHS), where he served in several senior leadership positions including as the Presidentially-appointed Assistant Secretary of Legislative Affairs. Upon departing, he was awarded the DHS Distinguished Service Medal, the highest honorary award for service granted by the Department. The award honors “exceptionally distinguished and transformational service to strengthen Homeland Security.”

Currently, Brian principally advises the the nonprofit Center for Internet Security, a cybersecurity best-practice provider and home of the Multi- State- and the Election Infrastructure Information Sharing and Analysis Centers and the CIS Critical Security Controls, and also serves on the Atlantic Council’s Future of DHS Project.

Brian graduated from Brown University and Arizona State University’s College of Law, where he served as the editor-in-chief of the law journal, and lives in Alexandria, Virginia, with his wife and two sons.