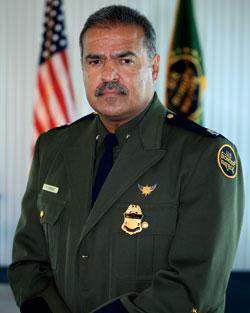 Felix Chavez was the Chief Patrol Agent of the Del Rio Sector prior to his appointment to Interim Chief for Laredo Sector.

Chief Chavez entered on duty with the U.S. Border Patrol on July 29, 1985, as a member of Border Patrol Academy Class 184. His first duty assignment was at the Sierra Blanca Station, which at that time was in the El Paso Sector. In 1990, he successfully completed the Border Patrol Tactical Unit (BORTAC) Selection and Training Course VI.

In May 2011, Chief Chavez was appointed to the Senior Executive Service position of Deputy Chief of the former Operations Division at U.S. Border Patrol Headquarters in Washington, DC. In August 2013, he was selected as the Deputy Chief Patrol Agent of the Tucson Sector.

Chief Chavez is a graduate of Ashford University in Clinton, Iowa, where he earned a bachelor’s degree in Organizational Management. He also successfully completed the Executive Institute at the University of Chicago’s Graduate School of Business, the CBP Command Leadership Academy, and in 2015, graduated from the National Defense University Capstone program.