The organization’s legacy has influenced its regional branches, which have continued to threaten regional and global security in Asia and Africa.

ISIS and its regional affiliates continued to threaten regional and global security in 2022. They have opportunistically aimed to take advantage of recent trends worldwide since the COVID-19 pandemic began in 2019. First, ISIS-affiliated groups saw the Taliban’s takeover in 2021 as a success story of jihadism. They considered it a model to achieve their goals in the fight against the western world. Second, Russia’s invasion of Ukraine has changed the world agenda, and it has become a priority for the West to support Ukraine. Overfocusing on Ukraine has created opportunities for ISIS-affiliated groups to operate securely in the jihadist regions. Third, the retreat of western troops from the areas where jihadist groups have been active has resulted in security vacuums. These groups have successfully operated under the weakness of current local governments. Fourth, the prison breaks provided opportunities for ISIS militants in 2022. For example, ISIS targeted the al-Sina prison in the al-Hasakah region in Syria. The eight-day battle recorded the death of 500 people; about three-quarters of them were ISIS militants. Although ISIS failed and lost many militants in its prison break attempt, it showed the group’s capacity to fight in multi-day battles.

Among the jihadist groups, ISIS occupies a significant place where the group controlled territory in Iraq and Syria and successfully achieved its goals of establishing a de facto state and ruling around six million people in the Middle East. At its peak in 2014 and 2015, ISIS was able to recruit more than 30,000 fighters from more than 90 countries, generating yearly revenue of around $2 billion and running a social media operation including more than 10,000 Twitter accounts. The United States’ counterterrorism strategies effectively weakened and confined ISIS in Iraq and Syria, where the organization lost most of its territory and militants. Furthermore, its leaders were killed in U.S. counterterrorism operations. Nevertheless, the organization continued to face critical challenges in 2022. The group’s leader, Abu Ibrahim al Hashimi al Qurayshi, was killed on February 3, 2022, the successor of ISIS’s most influential and charismatic leader, Abu Bakr al-Baghdadi, who was killed in a U.S. military operation in 2019. Additionally, U.S. officials killed two top group leaders in an airstrike on October 6, 2022. Losing territory and decapitating its leaders have deeply impacted capacity. As seen in Figure 1 below, the number of ISIS-claimed attacks continued to drop over the years, and it was a more than 100 percent decrease between 2018 and 2022. 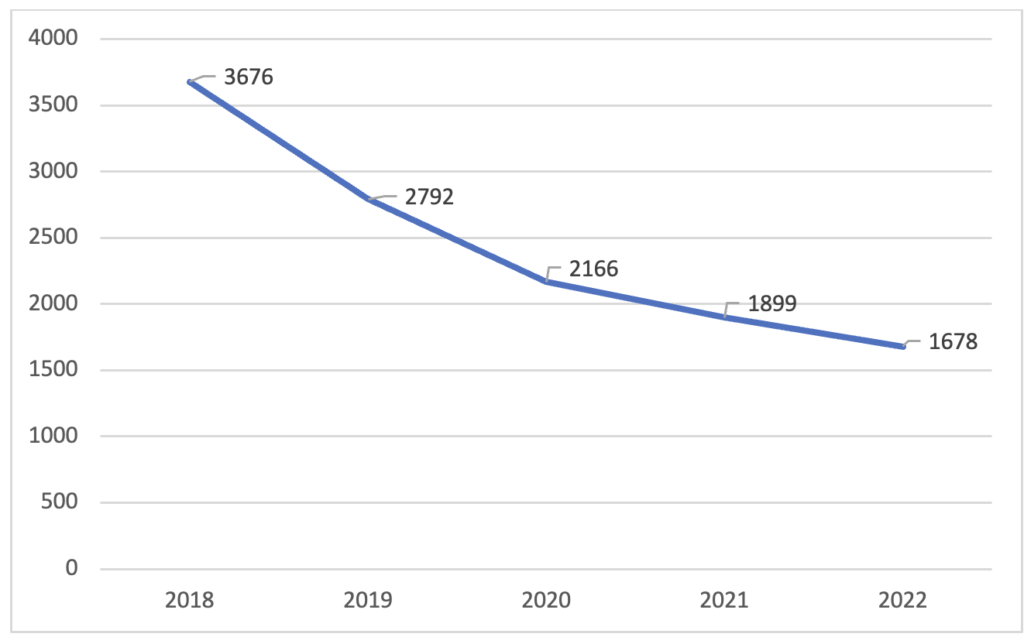 Despite decreasing the number of ISIS-claimed attacks and reducing its capacity, ISIS-Core in Iraq and Syria managed to continue its attacks. The year 2022 recorded spikes in ISIS activities and fears of its returns in Deir Ez-Zohr. The group intensified most of its operations in the areas held by autonomous administrations after the humanity and security campaign carried out by the Internal Security Forces of North and East Syria (Asayish) and U.S.-backed Syrian Democratic Forces in Hawl Camp in Hasakkah Governorate in September 2022. The campaign arrested 226 individuals, including 36 women suspected of belonging to ISIS cells.

In 2022, ISIS claimed responsibility for more than 100 attacks, most of which targeted SDF members and the Kurdish-led Autonomous Administration of North and East Syria (AANES) employees in Syria. Moreover, ISIS continued to demand that people in the region pay zakat, an obligatory payment made annually under Islamic law on certain kinds of property used for charitable and religious purposes. The group punished an investor and burnt his oil well after his refusal to pay zakat. Similarly, ISIS militants blew up a currency exchange office after the owner refused to pay zakat in October 2022.

On the other hand, the organization’s legacy has influenced its regional branches, which have continued to threaten regional and global security in Asia and Africa. For example, ISIS-K’s attacks increased in Afghanistan and spread to nearby countries such as Tajikistan and Uzbekistan. Almost every month in 2022, at least one or two ISIS-K attacks targeting Afghan Shia mosques were recorded. The group also conducted raids on Sunni mosques representing Sufi Islam and disapproving of ISIS’s brutal ideology. ISIS-K’s 2022 attacks proved that the group has the capacity to deploy suicide bombers, exert its influence in almost all 34 provinces of Afghanistan, maintain an organizational structure that includes global jihadists, and carry out attacks in Afghanistan’s neighboring countries. ISIS-K’s 2022 high performance shows that the group may replace ISIS-Core and can be more threatening to regional and global security.

Africa occupies a special place for ISIS, which has increased its capacity and popularity. It has been a trend to see the involvement of Muslim communities that are exposed to political, economic, and social grievances and feel marginalized and discriminated against in jihadist groups. These communities that have formed local jihadist groups to defend their rights have competed to be predominantly under the banner of ISIS. Figure 2 below shows the number of ISIS-claimed attacks by region. While three percent of ISIS attacks happened in Africa in 2018, it accounted for 29 percent in 2021 and 45 percent in the first ten months of 2022. 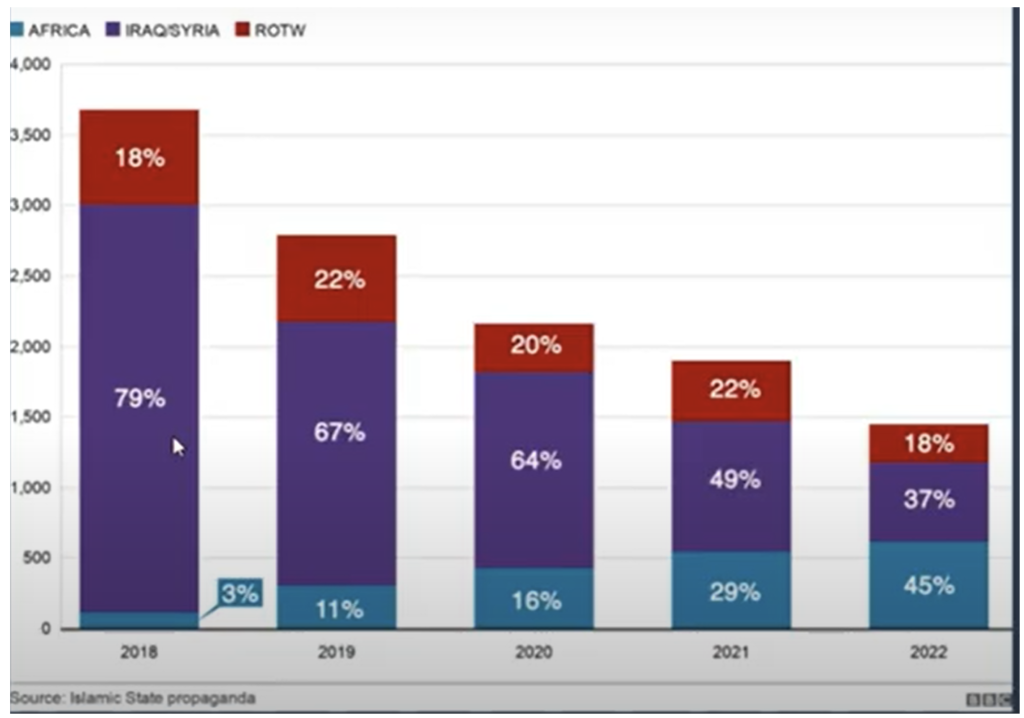 In 2022, ISIS’s branches in the Sahel region, Nigeria, Mozambique, and the Democratic Republic of the Congo were active and significantly threatened regional security. ISIS-Greater Sahara (ISIS-GS), formed in 2015 as a split within the militant group Al-Mourabitoun, is the ISIS branch in the Sahel that predominantly operates in Mali, Burkina Faso, and Niger. The group killed 600 people in Niger in 2021 and continued to target UN peacekeeping missions, the Movement for Azawad Salvation (MSA) and the Imghad Tuareg and Allies Self-Defense Group (GATIA) as well as JNIM group in its attacks in 2022. ISIS-GS killed more than 400 civilians in its fight against MSA and GATIA in Burkina Faso in the first half of 2022. The same period recorded the attacks of Jama’at Nasr al-Islam wal Muslimin (JNIM), an al Qaeda-affiliated group operating in the Sahel, in 10 out of 13 regions of Burkina Faso, but ISIS-GS’s attacks were deadlier, killing nearly twice as many people.

Islamic State in West Africa Province (ISWAP) is the ISIS branch in Nigeria that is primarily active in the Chad basin. The group is the offshoot of Boko Haram, which has a violent rivalry. The most prominent and charismatic leader of Boko Haram, Abubakar Shekau, killed himself in an ISWAP raid in 2021. The organization was one of the top 10 terrorist groups with the most fatalities in 2020, killing 982 people. ISWAP continued to make attacks in Niger, Chad, and Nigeria and intensified its activities in Cameroon in 2022. Using hearts-and-minds policies, the group aims to get the sympathy of Muslim communities and selectively targets state officials and Christian communities. In 2022, the group conducted many attacks and targeted the Nigerian military. ISWAP killed nine soldiers in one of those attacks on November 20, 2022.

Islamic State in Mozambique (ISIS-M) is another active ISIS branch in Africa. Aware of what it means to get recruits, funding, and popularity, Ansar al-Sunna, who fought for Muslim grievances in northern Cabo Del Gado, pledged allegiance to ISIS in 2017 and has begun to use the ISIS-M group name. The group was able to conduct attacks in Tanzania in 2021. Interestingly, the group’s common tactic is beheadings, being listed as one of the top 10 organizations with the most beheading cases. In 2022, ISIS-M kept its momentum and was actively involved in terrorist attacks in the region.

Islamic State in DRC has been another active group in Africa. The Allied Democratic Forces (ADF), which is an armed group primarily engaged in the eastern Democratic Republic of Congo (DRC), has declared loyalty to and operates under the banner of ISIS. The group conducted attacks in Uganda in 2021 and continued to do its terrorist activities in DRC in 2022.

To conclude, ISIS does not get the western focus as it did when the organization controlled territory and perpetrated violent attacks in the mid-2010s. Terrorism databases have reported a decreasing number of ISIS attacks worldwide; however, the organization has exerted influence in conflict zones, Asia, and Africa. ISIS is the organization with the most regional branches. Several have faded into obscurity and recently have not been involved in notable terrorist attacks. Still, its branches in Afghanistan, the Sahel region, DRC, and Mozambique have been actively engaged in terrorist attacks. It should be noted that ISIS-Core in Iraq and Syria lost its last three leaders over the previous three years. However, the group is still capable of attempting to control territory in Deir Zohr and is involved in prison breaks with the involvement of several hundreds of its militants and using highly complex weapons. ISIS-K’s 2022 performance in Afghanistan and its capacity to do attacks in neighboring countries as well as ISWAP, ISIS-GS, and ISIS-M’s regional attacks seem to be alarming for regional and global security and indicate that the world will continue to experience ISIS attacks in the following years.

Are al-Qaeda’s 2022 Activities a Harbinger of the Terror Group’s Resurgence?